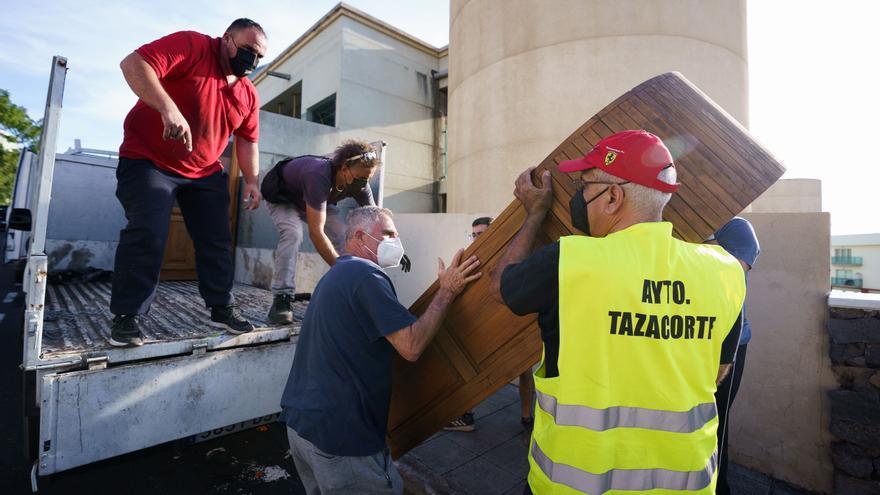 Consuelo feels lucky, her 'bodeguita' in Tacande It is one of the properties close to the La Palma volcano They have managed to escape from the lava, but not from the ash. There is much more than she could clean no matter how hard she tries, which is why the volunteers are here.

"Boys, I'm staying here because the car won't go up any more, thank you very much," he tells the members of the cleaning brigade of the Red Cross. She cannot continue on foot, but the volunteers continue up the mountain on their way to her 'bodeguita'.

"A part has already collapsed, but maybe something can be saved"Consuelo clarifies, who stays there, to wait for them.

What used to be a road are now black dunes that not even the Red Cross SUV can travel. Shovels, hoes, buckets and brushes on the shoulder, up the slope, the cleaning crew does not shy away from a mountain of ash that exceeds the knee.

It is made up of a group of volunteers from Madrid, Bilbao, Alicante, Murcia, Gran Canaria and Tenerife, unknown to each other, but who share a mission: save the houses from tons of volcanic slag that threaten the structures.

On the roof of the 'bodeguita' by Consuelo there is Reiner, who is breathing agitated, but also relieved to see the reinforcement of this group of volunteers arrive. He has been releasing ash from the deck since 10.30 in the morning ... "and what's left!", He sighs.

The priority is the roof and the cistern, which are in danger of sinking. "We have already lost this other area, we'll see what we do later," he laments, while pointing to a mass of tiles that used to be a semi-covered patio with a barbecue.

This property has already been cleaned, thanks to the staff of the Military Emergency Unit, but the volcano has not given him truce during these three months.

Menacing and eerily silent now, the new mountain looming in Old Summit It has left the whole area a black desert. "It was difficult for him to get here," says Reiner, speaking of the volcano as if it were a person, "but he claimed it with the ash." The man jokes, while taking the opportunity to take some breath between shovel and shovel.

"Here we celebrated the parties and grills. We spent the weekends ..." A stop in his story denotes some sadness: "All this was green." He remembers moments from just three months ago with a thread of melancholy, while his gaze scans a horizon where there is only black.

Consuelo's 'bodeguita' is not the only stop that this Red Cross cleaning brigade has had, which in Tacande accompanied Michael and his partner to their home to measure gases. "We are fine, it is a second home," explains this neighbor, "surely there is someone who needs them more than we do."

Talk to Red Cross while trying to enter his house, with a terrace in which two hammocks can be seen. There, too, mountains of ash exceed the doorknobs. The solidarity of the neighbors has no end.

Lorenzo repeats the same words without knowing Michael. You almost seem to feel guilty about getting help. He has two properties in the area that he is going to check to see "how they are doing", he jokes. In Los Acebuches and, after going up a steep slope, he waits patiently for the Red Cross volunteer who accompanies him to make the safety measurements.

At each beep he is startled: "Oh, God! Is that there are gases?" He asks the rest of the team, who reassures him.

"The roof is quite clean, the cistern too," he celebrates, hands and shovels have already passed through there to give him a hand.

Isabel, in Las Manchas, has gone to visit the house of an elderly person whom she has cared for for years, alone and without help. "The house is there, and that's the important thing," she says determinedly, downplaying the layer of ash that is more than 30 centimeters thick that covers the entire patio.

Seven people, with shovel, hoe and wheelbarrow, join her to try to save the reservoirs and free the accesses, in a house dating from 1900. Faced with the destruction left by the volcano, she plays music and transmits positive energy to the team . To the rhythm of salsa and rumba, the ceramic floor begins to appear.

Grateful for the help, she confesses: "Without you, not even in a clean year all this." You're right, getting rid of ash just a meter takes more than half an hour of non-stop work.

Just a few meters from the southernmost wash, which crossed over the Las Manchas cemetery, a green and white ribbon separates the houses to be saved from those sentenced by the volcano. Here the ash becomes dense, thick and with metallic sheen. The houses are buried and can be seen among the ash dunes with roofs and small chimneys.

The danger is invisible in this area, so gas measurement becomes more than necessary. After securing the perimeter, the cleaning begins: relieve roofs, release windows, facilitate access ... the stairs have disappeared, it is necessary to climb mountains of ash and lapilli to reach the houses, more than a meter and a half of black sand guards the walls and a metallic sheen warns that there was a swimming pool underneath.

The bleaker outlook and the absolute silence of a ghost zone is broken by the noise of the shovels, which work selflessly to save these houses buried by the fury of Cumbre Vieja.

"Happy new year, Consuelo, the entrance and the roofs are now free. There is less left," says one of the members of the Red Cross brigade to the owner of the 'bodeguita', who has waited several hours alone and in her car upon return of the team.

With glassy eyes and a smile that remains unchanged despite difficulties, Consuelo responds with jokes. "It will be better than 2021 for sure, and with that we settle, right?"