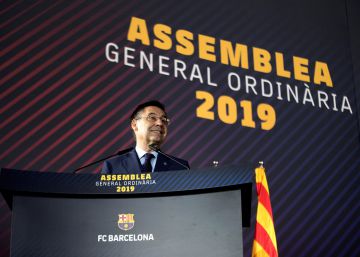 Freehand, which does not cease to have its grace, decided the Barça commitment partners withdraw the honorary medals awarded in his day to the dictator Francisco Franco. 44 years after his death, neither more nor less, there were still those who abstained and even those who voted against the measure, which reminds us of an incontestable truth: Barcelona and Franco were never incompatible. Josep Lluís Núñez, the first president of the democratically elected club after decades of impositions, knew this very well. From his victory the newspapers of the time tell very revealing details, such as that his supporters sang the Face to sun to silence the anthem of Els Segadors improvised by Ferran Ariño, his rival in those elections. From his act of proclamation would leave another song for history, now almost forgotten: "You see, you see, Ariño is from the PC."

The news has lifted the ban on one of the favorite hobbies of a certain sector of the Madrid press, also called national without this meaning anything more than the obvious: fantasize about the dictator's special interest towards the Catalan club and exalt the figure of Santiago Bernabeu as a charismatic leader of the resistance, a kind of patriotic Che Guevara whom Millán Astray himself came to challenge in a duel after being expelled from the box. From a certain geographical distance – and I want to think that also emotional – the story about a distracted dictatorship to which his protégés felt the recurring drive to entertain while consenting, Sunday yes, Sunday also, the small coup d'etats of the wayward Bernabéu a stone's throw from Pardo. If we continue along this path, in a few years we will assume that the venerated president of Madrid perpetrated his actions disguised as a clown, or that Agustí Montal turned out to be Batman's fascist father: the truth may well be a lie that is repeated enough.

If the first norm of the Franco club is that nobody recognizes to be the Franco club, the second one could be that all the clubs were Francoist during the Franco regime: a matter of pure logic if one understands – and accepts – the usual nature of any dictatorship. Democracy would bring enormous advantages, including the possibility of rewriting history itself without fear of reprisals of yesteryear. The main problem of the Catalan club was that its councilors showed no interest in adapting the story contracted except for a specific point that allowed them to practice their favorite fate: that of victimhood. Some journalists tried on their own, such as Vázquez Montalbán, but the idea of “Unarmed army of Catalonia” would be forced to live with the ministerial offices of the regime preserved as gold cloth in the bowels of the Camp Nou itself. That was Joan Laporta's first measure after being invested president: to make them disappear. And it will not be missing who, still today, firmly maintains that this could lead to a serious disgust: the problem of the tentacles is that they can be indigestible and Barça has needed 44 years to scare those fears, and finally, even if it was at hand raised, cool your face a little.

Harimaguada and El Carmen, at the head of the island league – La Provincia

Badalona – Granada: Timetable and where to watch the game and possible lineups