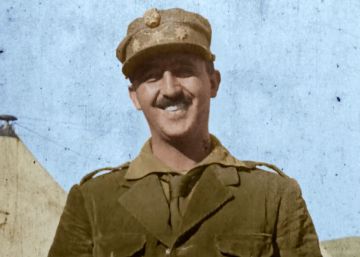 Generalissimo, Franco's life in color opens this Saturday in the Seminci Film Festival of Valladolid and it raises an interesting debate: can a documentary feature reconstruct the historical facts of the political and personal life of the dictator with the NoDo? The producer Minority absolute, after having colored the Spanish Civil War in 2016, focuses on the figure of Francisco Franco, from his birth to his death, from campaigns in Africa to alliances with Ike Eisenhower and Richard Nixon. A colored biography. The director of the film, Luis Carrizo, uses the expression "Humanize Franco" as a reason to remove it from black and white. He believes that by coloring it he is "taken down from the marble" and "the human being" emerges.

"That helps to relativize the mythology that Franco has created on its figure and that survives as a savior of the country," explains the director. Francesc Escribano, producer, points out that they have tried to focus on the character and “Narrate the facts in the most dispassionate way possible”. Recognize that it is not a tape as "passionate" as While the war lasts, the last film by Alejandro Amenábar. "Our goal was to focus on a colder look, mark a distance with the facts, draw a biographical journey without that tone so conditioned by so many stories, that draw him as a hero or villain," says the journalist and author of the book Countdown: the story of Salvador Puig Antich.

The film has had the support of the Spanish Film Library, where they have been working for two years to comb the complete NoDo file. First they restored the tapes, then they shortened them to digital format and, finally, the most handmade process, the coloring, frame by frame, with the image editing programs and the support of documentary filmmakers who pointed to the colors of those gray years. All of Europe is coloring its past since 2012, with the First World War. France, the United Kingdom and Germany have already updated the war chapters of their history and broadcast them on national public televisions. In Spain, both this production and the previous one about the Civil War, are passed on the DMAX channel, not on RTVE.

"It's a colder look, a biographical journey without that tone so conditioned by so many stories, that they draw him as a hero or villain," says the film producer

Carrizo recognizes that the greatest difficulty of this work has been marked by the audiovisual material that has arrived. Biased and flattering. The NoDo was the biggest tool of Franco propaganda, which showed in all the cinemas of the country the Spain dreamed by Franco. There is hardly any audiovisual material that counteracts that triumphant image, which has now been colored. That is why they play with the tension between what has been said and seen: the only way they have been able to counteract that idyllic image is with the script, in which repression, corruption and arbitrariness of the regime are mentioned.

There is no filmed trail of resistance. As if it hadn't existed. “It is that there was very little resistance movement in Spain, in addition, Franco was a military trained in the colonial wars and mounted a war and postwar to exterminate dissidents. He was the star of the NoDo and our movie is a portrait of the character, in which we tell how he controlled and managed the power in an admirable way, ”says Escribano. “The first pieces filmed on dissent are from the sixties. Until then they had everything that was issued in this country under control. We played the counterpoint as much as we could, but this is also a biography, ”explains Luis Carrizo. "There is no vision of counter propaganda," says the producer.

Two days after exhumation of the body of the dictator of the Valley of the Fallen, this colored perspective returns a life of the dictator, as its creators say, "humanized." The objective was, as they say, to look at history to rewrite it in view of the current moment, "with the eyes of now." However, it is clear that the most contemporary thing is history and not color.