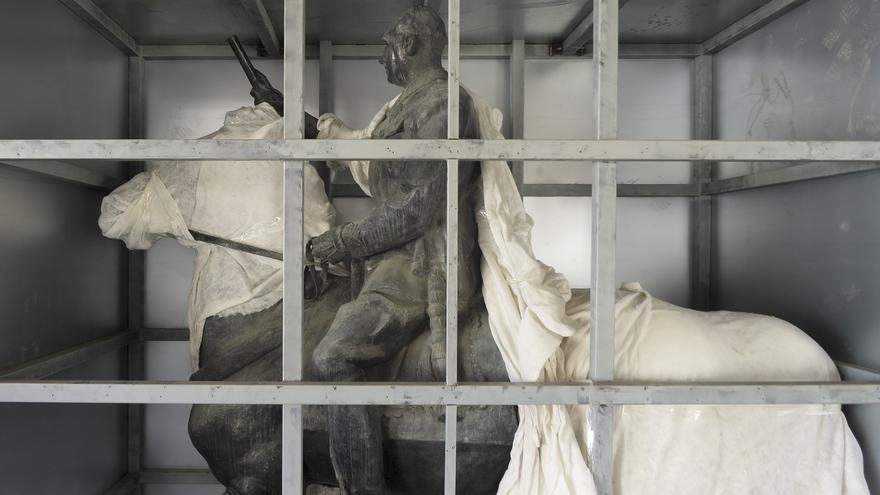 In October 2016 a group of people demolished a statue of Franco in the Born neighborhood in Barcelona. The sculpture had been placed four days earlier as part of the exhibition Frank, Victoria, Republic. Impunity and urban space. Along with that of Franco, a sculpture of the Victory and another of the Republic, located on the esplanade in front of the exhibition, sought to reflect on the ideological manipulation of public space. The statue of the dictator on horseback, which had been decapitated long before in unclear circumstances, was under the media spotlight before being removed from the warehouse where it was kept and was vandalized from the first moment of its installation with paint, eggs, and all kinds of objects, from an inflatable doll to a pig's head. After four days of mounting tension, a group of people toppled it, and selfies of the action were compared on social media to the toppling of the statue of Saddam Hussein in the Gulf War. Then, the Barcelona City Council decided to withdraw it.

Those days of violence left their mark on Julia Schulz-Dornburg, the architect in charge of staging the exhibition. She had been responsible for removing the statues from the warehouses where they were and placing them in the square. The commotion caused by the statue of the dictator left her shocked, and at the end of the exhibition, she decided to visit the country with a camera following Franco's footsteps that are still written on the landscape.

The investigator was contacting, city by city, with those responsible for the custody of the nine equestrian statues that remained of Franco, and asked them to see them and take photos of them. She got it with four of them. The life of all those sculptures, why and when they were made, what buildings or streets they inhabited and where they are kept is now told in the book Where is Frank? (Three sisters).

It didn't take him long to find out where the nine equestrian statues of the dictator were, although there is no record where that information is collected. The route to photograph them is a bizarre adventure that the architect has collected in a travel diary that at times reminds of the Berlanga universe and that shows the complex relationship that exists today with the remains of Franco.

Processing the permits to take the photos was a complex task that took him more than a year. In all cases, responses were found that involved a chain of queries, procedures and delays in which, although no one refused, a clear discomfort with the request could be seen and a dissuasive strategy aimed at exhausting whoever wanted to see the statues. The different institutions tried to postpone the visit, claiming that they were not the legal owners, communicating that the sculpture was ceded to another organization, or that the person responsible for giving the permission was so busy that they could never be contacted. Most of the time, communications were by phone in an attempt, Julia Schulz-Dornburg says, not to put responses in writing.

The researcher's tour started in Barcelona, ​​visiting the warehouse to which the demolished statue in El Born returned. She continued in Toledo, where she did not get permission to see the statue of Franco that is in the Military Academy in which he was trained and that used Republican prisoners for its construction. It continued to Zaragoza, where Franco's sculpture made to recognize his work as director of the Military Academy and which was initially installed there, has ended up in the gardens of the Labor University, a complex of buildings that was closed in 1997 due to aluminosis, and that it is now a storehouse of various objects. In its gardens, where the National Police riot police train and television series have been filmed, the statue of Franco was placed in the open air in 2006, until someone complained about its condition on a Francoist website, and then they covered it up with a metallic structure and a green fabric. After several attempts to get permission to photograph it, Julia Schulz-Dornburg convinced the University security guard, who let her enter the campus for ten minutes, just long enough to get under the structure and take some photos.

The stop in Madrid is a black hole. It was impossible for the researcher to know the fate of the statue after it was dismantled from a central area of ​​the capital in 2005. The Francisco Franco Foundation then sued the State for its removal, although the Supreme Court dismissed the case because, in view of the Historical Memory Law, their relocation was not possible.

The easiest steps for Julia Schulz-Dornburg were in Valencia, which was the first Spanish city to remove a statue of the dictator from public space, in 1983. That time, the maneuvers to move it ended with the statue broken and the bust of Franco hanging of the crane with the chain around his neck. After 27 years on display at the Captaincy General, the statue was placed in a metal box and taken to the Bétera military base. There, in a warehouse between sacks of cement and scaffolding, she opened the box in front of the architect and elite European soldiers who had never seen what was inside.

Schulz-Dornburg was able to see and take photos of the statue that is kept in Santander, parked in a municipal warehouse between official cars. But not in Franco's hometown of Ferrol, where the biggest statue is. Weighing seven tons, the Guerrilla Army of the Free Galician People detonated an explosive against it in 1988 but, although all the glass in the square where it was located was broken, the statue did not suffer a scratch. It is the only one of all that was not covered when it was removed from the square in 2002 and was accompanied by about a thousand followers to the Naval Museum where it remained until it was removed in application of the Historical Memory Law. Yolanda Díaz, then spokesperson for En Marea, raised a proposal in 2017 for the statue to be melted down and to sculpt with that bronze another sculpture that pays tribute to the victims of Franco's repression.

The last of Franco's statues was inaugurated in Melilla in 1978, as a tribute by the Legion after the dictator's death. It was financed by Legionnaires of Honor and was exhibited at the Millan Astray Barracks for 32 years until, in application of the Historical Memory Law, it had to be withdrawn. He then moved to the founding of the Gaselec electricity company, whose president was a legionnaire of honor, thanks to an agreement with the Ministry of Defense under Cospedal's mandate. Melilla was the most frustrating experience for Julia Schulz-Dornburg, because her request to visit the sculpture was very well received by the legionnaires, but finally they asked her to stop asking about it.

Nor could he see the statue that is preserved in Segovia in the gardens of La Granja de San Ildefonso. It was commissioned by Carrero Blanco to celebrate Franco's 50th wedding anniversary. Carrero was going to approve the statue when he was killed in an attack and the statue was never exhibited in public space.

Julia Schulz-Dornburg recalls how "after the Civil War, the Franco regime launched itself to occupy public space with a monumental policy that filled towns and cities with statues of the dictator, in an exercise of power and propaganda". There were also allegorical images of victory and others that glorified the rising and the fallen, and the territory was filled with crosses. With the end of Francoism, "in the case of allegorical monuments, it has been decided to trivialize them in some way, or by placing them in inconspicuous places, such as roundabouts, or by removing explicit references or dismembering them," the architect points out to elDiario. is.

"They have been modified and there are millions that are still installed in squares and streets throughout the country. But the portrait of the dictator has such a powerful weight that it cannot be separated from its meaning when, in addition, in this case they are figures on horseback that express victory and power. The researcher's journey draws a map of the dictator's presence in Spain and confirms that "Franco is still among us. He is hidden, waits covered, waits hidden, appears decorated and sleeps in a metal box."

The trip to look for him began in Barcelona, ​​with the surprise of a reaction that she did not expect. "The power of the symbol, even decapitated, was much more powerful than I could have imagined. Interestingly, no one attacked the statue of Victory, which ultimately symbolizes the fall of Republican Barcelona and the proclamation of the Franco regime. It was Franco who captured all the attention and anger," he concludes.