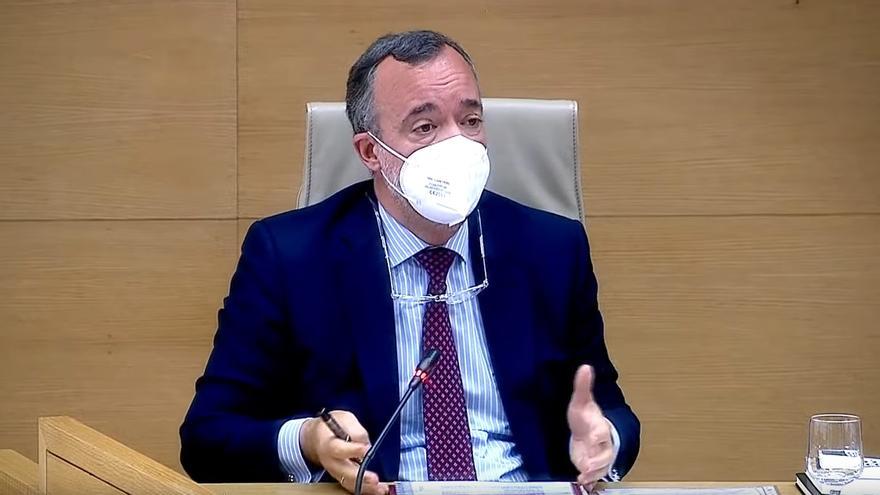 The one who was number two of the Interior during the "para-police" espionage to Luis Bárcenas has refused to explain why he felt betrayed by the former president of the Government Mariano Rajoy, the former Interior Minister Jorge Fernández Díaz and with the former general secretary of the PP María Dolores de Cospedal, as she wrote on the mobile phone that the investigators in the Villarejo case seized from her. Before the Interior Committee of Congress, Martínez has appealed to the recent Data Protection Law approved by Congress and the mention that it makes that personal data that appear in judicial investigations cannot be used outside of it.

"My great mistake was to be loyal to miserable people like Jorge, Rajoy or Cospedal," he wrote on June 5, 2019 in a message to the president of the National Court, José Ramón Navarro, when it had already been published that Judge Manuel García-Castellón I was going to cite him as a defendant in the Kitchen case. When he was finally called to testify, Martínez avoided at all times establishing the responsibilities of his superiors and denied having coordinated the parapolice operation, as pointed out by other investigators.

This Tuesday in Congress he has used the same line of defense, but without going into details because it is a judicial investigation underway. In the interrogation of the ERC spokesperson, Gabriel Rufián, Martínez has gone to the counterattack and has said that if he did not answer the question about that message, it is due to the reform of the Data Protection Law that the block of support for the inauguration of Sánchez had approved. "You vote for it and I abide by it," he said about the reform of the Law to Rufián.

Most of the spokesmen have tried to get Martínez to elaborate, stating that everything indicates that he is a kind of broken toy that is going to assume responsibilities that do not correspond to him. In no case have they managed to get Martinez to vary his strategy. Later he has framed the message in his personal dejection. "At a time when I was broken, things like this were said about a friend, a relative ...", he stated. The PNV spokesman, Mikel Legarda, has reminded him that the investigation commission is not affected by this reform of the Data Protection Law because it is outside the judicial investigation.

"I deny in a forceful way and without any nuance that I participated or had direct or indirect knowledge" of the Kitchen operation, Martínez read before the Socialist spokesman, Felipe Sicilia, began to ask, who was the first to warn him that may end up being the "scapegoat" of the case.

During her statement before Judge García-Castellón last November, he did not ask her about María Dolores de Cospedal. This Tuesday the spokesmen did it. Martinez has said that he did not discuss the Kitchen or "almost anything" with Cospedal at the time. The former secretary general of the PP will appear tomorrow afternoon before the investigation commission.

Martínez has also denied that he acknowledged in a conversation with Commissioner García Castaño the existence of a pendrive stolen from Bárcenas. He has said that the meaning of that conversation has been distorted because they were both joking and that he has never heard anything about that material, which would contain recordings from Bárcenas to Rajoy, among others, according to Villarejo in recorded conversations incorporated into the cause.

Judge García Castellón had summoned Martínez and Villarejo to testify tomorrow morning in the Kitchen case, but the summons have been suspended so that they do not coincide with the statements of businessman Ignacio López del Hierro and the former Secretary of State of Security José Antonio Nieto, who will appear in Congress before Cospedal.