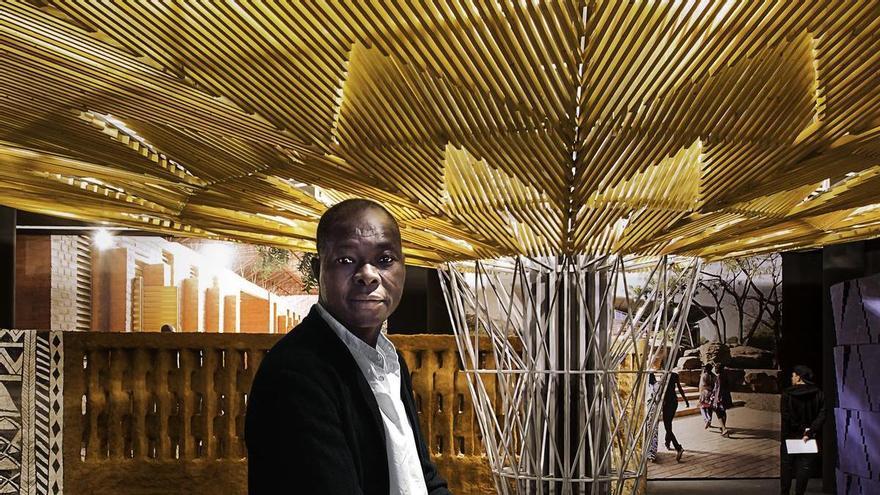 The Pritzker Prize is once again doing itself a favor by choosing Francis Kéré for its 2022 award, someone whose prestige has grown in the opposite direction to the architecture that the jury of these awards chose when he began his work. His first project, the Gando Primary School, was started in 1999. That year, Norman Foster, author of Hong Kong's HSBC, won the Pritzker Prize, which was the most expensive building in history when it was completed in 1986. Those were splendor times for show architecture and star architects. While Kéré's modest school was being built in his hometown, made of earth and bricks under a separate structure from the roof that serves as an umbrella, without mechanical systems of any kind and erected by the neighbors, they won the Pritzker Rem Koolhaas Prize (2000 ) and Herzog & de Meuron (2001). And in following years Zaha Hadid (2004), Thom Mayne (2005), Richard Rogers (2007) and Jean Nouvel (2008), coinciding with the Global Financial Crisis of 2008, of specifically real estate causes.

The Pritzker Prize, from rewarding the authors of expensive and irrational projects to rewarding social values

Since then, the spectacular architectural extravagance has lost its reputation. It is true that they remain in places linked to the business of fossil energy sources, but the implicit reproach of this type of project has meant that the cultural environment of architecture has changed its paradigm. The new heroes work with earth and sticks, in places of extreme poverty, and carry out works with microscopic budgets, but maintain bridges with Europe and North America, and give visibility to a rigorous and demanding work, often flying between the First World in which they have their studios, and the Third World in which they carry out their works. The least harmful carbon footprint is the one left by them, establishing connecting vessels between the most distant places on the planet in per capita income and quality of life.

Francis Kéré has a successful life against all odds, because he was born in 1961 in the village of Gando, in Burkina Faso, West Africa, made up of a small group of huts with green roofs, in a place that lacked running water , electricity and where there was no school. His father, the local chief, sent him to study in the neighboring town, and then in the country's capital, Ouagadougou, so that he would be the first in his community to read and write, and he took advantage of the opportunity without forgetting the origin of he.

When he was twenty years old, a vocational scholarship took him to study carpentry in Berlin. Much later he entered the Technische Universität Berlin, also with a scholarship, and graduated as an architect shortly before turning 40. But he kept thinking about his community of origin, and obtained altruistic financing in Germany to build the Primary School in Gando, for that other children could have access to education without leaving the village. This work deserved the 2004 Aga Khan award, given to architectural works from the Muslim world, which has shown an early sensitivity towards sustainable architecture. And that same year Kéré opened his studio in Berlin.

The recognition of his work was not granted exclusively to the merit of the company achieved, but also to the quality of his architectural concepts, to the sophisticated intelligence that connected the necessary with the beautiful and the useful. Also with what was possible, since it incorporated construction techniques and accessible materials, which the users and builders themselves were capable of handling. This continued with the projects for teachers' housing in 2004, the expansion of the school in 2008, the library in 2010. The Secondary School and the Women's Center came later, and Kéré's work seemed to respond to a program of human development. , carried out from the studio of an architect capable of giving each work a deep and necessary meaning.

Unstoppably, Burkina Faso and other African territories felt that they had found an apostle capable of leading their projection into the future. He received other commissions in his land, in Dano and in Laongo, and in Mali he made the Center for Earthen Architecture in Mopti (2010) and the installations for the National Park of Mali in Bamako (2010). Most of the works came from poor countries around him: Mali, Mozambique, Kenya, Togo or Sudan, which recognized his talent and effort.

The pride and confidence that he has been able to transmit to his compatriots materialized with the commissioning of the project for the new Parliament of Burkina Faso, resolved with a symbolic pyramid of habitable surface, covered with gardens, orchards and stands, pending construction. The National Assembly of Benin, in Porto Novo, is currently under construction, demonstrating that the Burkinabe architect has managed to become a symbol of the African renaissance and of the hope with which he looks to the future of the entire continent.

Technical skill and tight budgets have not been able to contain his remarkable creative capacity, which is present in utilitarian works such as the Liceo Schorge High School (2016) in Koudougou, and in numerous pavilions with artistic purposes designed for Germany, Denmark, Italy , United States, United Kingdom and Switzerland. In the United States, she has built Xylem (2019), an open-air pavilion for the Tippet Rise Art Center, in Montana, that evokes the living structure of a tree, a beautiful place to gather or meditate. His best-known work is the brilliant pavilion made in 2017 for the Serpentine Gallery in London, in which he plays with two autonomous elements, a roof and a curved wall, to create a spatial game that alludes to the large solitary tree under which they held meetings. community in their village.

He also transferred the idea from London to the installation of his exhibition at the ICO Museum in Madrid in 2018, made by himself, which is his only work in Spain to date. The exhibition was a sample of the type of materials and forms that he uses, mud walls, textile curtains, masses with wooden trunks, light metallic elements, collected by the curator, Luis Fernández-Galiano, in a splendid catalogue.

Nourished by roots on two continents, the sap of Kéré's architectural tree drinks from the best of both worlds, achieving a personal and universal synthesis at the same time, which gives his works a classic, archetypal and timeless character. He is about a formidable, sensitive, committed, intelligent, astute and visionary architect, who discovered the way to make a revolution a reality with palpable examples. What he imagined, that rural school for his village in Burkina Faso, became a reality. He found a way to finance and carry it out, and the model was used for new buildings around it, and for other places that saw that this type of action was possible.

The architect often says, in relation to the youngest Africans, that they must be warned that they will not find their future in Europe, that they must be kept in their countries by financing projects like theirs, to keep them rooted in their towns. His words and his work reflect his personality, empathy for his fellow men, a simple joy that comes from the usefulness of his work, from his ability to contribute to harmony and happiness, with the firm will to serve as an example to the most young, showing a sincere lack of prominence that has not been able to hide its enormous value.

In the world of successful architects, Kéré represents authentic values ​​and his work is full of truth and love for his fellow men. A work that does not speak of itself. She speaks of the need of those who receive her, and of the respect with which they should be treated, even if they are the poorest clients in the world, because her work is aimed at the compatriots of a country like Burkina Faso, one of the countries with the lowest income per capita even within Africa.

This award to Francis Kéré represents a continuation in the change of perspective on the architectural panorama that the Pritzker jury has maintained in recent years, in which it has awarded sustainable and supportive attitudes in the work of Shigeru Ban (2014), by Alejandro Aravena (2016), the Indian Balkrishna Doshi (2018), and the Anne Lacaton and Jean-Philippe Vassal team last year. In the organization's words: "Francis Kéré's work also reminds us of the struggle needed to change unsustainable patterns of production and consumption, as we strive to provide adequate buildings and infrastructure for billions of people in need." This does not even imply that the inequality gap has narrowed, nor that the practice of architecture distances itself from the interests of the real estate market, but it marks a path that must be traveled so that architecture reaches the most needy and that the construction practices are compatible with the future of the planet.