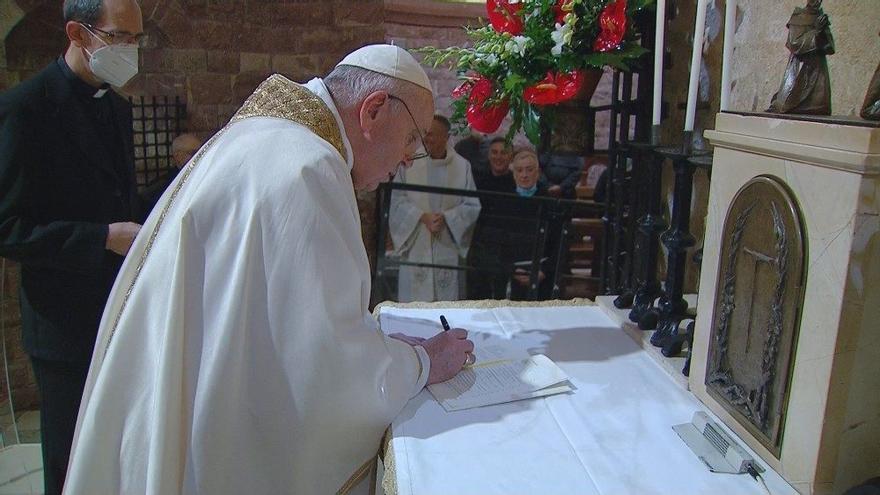 “The market alone does not solve everything, although again they want us to believe this dogma of neoliberal faith.” Pope Francis decrees, in his latest encyclical -Fratelli Tutti, on fraternity and social friendship, the third of his pontificate- the end of neoliberalism, which he labels as “poor, repetitive thinking, which always proposes the same recipes against any challenge that arises. ”

In a text that is very harsh for the theses of savage capitalism, Bergoglio attacks “the absolute and untouchable right to private property”, which “can only be considered as a secondary natural right and derived from the principle of the universal destiny of created goods” .

“Neoliberalism reproduces itself without further ado (…). Financial speculation with easy profit as its fundamental aim continues to wreak havoc,” Bergoglio attacks, in a deep and concrete text, which can be read in one go (despite of its 200 pages), and in which the Pope unravels the roots of a lost world society without goals, and claims “universal brotherhood” and care for one another, in the face of the culture of waste.

Evoking the crises of 2007 and the current pandemic, the Pope maintains that “the dogmatic recipes of the prevailing economic theory proved not to be infallible.” “The fragility of world systems in the face of pandemics has shown that not everything is resolved with market freedom”, he adds, lamenting that policy “towards the poor but never with the poor, never of the poor and much less inserted in a project that reunifies the towns “.

Faced with this, Francisco is committed to “the maturation of stronger and more efficiently organized international institutions, with equitably appointed authorities by agreement between national governments, and endowed with the power to sanction.” Along these lines, he adds, “a reform of both the United Nations Organization and the international economic and financial architecture is necessary,” with a redesign of the Security Council that avoids vetoes that “delegitimize” its work.

And with clear objectives, such as the end of hunger in the world, “a real scandal.” “Hunger is criminal (…), while we engage in semantic or ideological discussions, we allow that even today there are sisters and brothers who die of hunger or thirst, without a roof or without access to health care.” In fact, he proposes that “with the money that is used in arms and other military expenses, we constitute a world fund, to end hunger once and for the development of the poorest countries.

No to war, the death penalty or life imprisonment

Because the encyclical also supposes a delegitimization of the use of weapons, war or the death penalty. Also, life imprisonment, which he describes as “hidden death penalty”, and the position of some who call themselves Christians but accept and promote violence. In fact, the Pope even says that many atheists follow the Gospel of Jesus better than Christians.

“There are still those who seem to feel encouraged, or at least authorized by their faith to sustain various forms of closed and violent nationalism, xenophobic attitudes, contempt or even mistreatment towards those who are different,” laments the Pope, who also recalls the horrors experienced in the pandemic. “Let’s not forget the elderly who died from lack of respirators, partly as a result of health systems dismantled year after year,” he says, in a clear reference to Spain.

Francisco also reflects on the need to make a historical memory of dictatorships and horror, always from the perspective of the victims, in several passages that will stir some nostalgia (and the Benedictines of the Valley of the Fallen): “It’s easy today fall into the temptation of turning the page saying that it has happened a long time ago and that we must look forward. Not for God’s sake! You never advance without memory, you do not evolve without an integral and luminous memory “, Bergoglio maintains , which adds that “it is true to tell families torn by pain what has happened to their disappeared relatives,” and strongly condemns State terrorism.

“It is very healthy to remember the good,” he adds, pointing out that “forgiveness does not imply forgetting” but that “revenge does not solve anything.” Justice without impunity, and leaving things clear: “When there was mutual injustice, it should be clearly recognized that they may not have had the same seriousness or that they are not comparable. The violence exercised from the structures and the power of the State is not in the same level of violence of particular groups “, concludes Bergoglio.