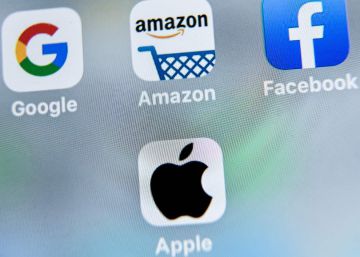 France considers "unacceptable" the threats of the United States to establish tariffs in retaliation for the French tax to the big Internet companies, French Economy Minister Bruno Le Maire said Tuesday. As he has advanced, the Government of Emmanuel Macron has already contacted Brussels and hopes that the European Union will respond "strongly" to this decision of the Donald Trump administration, which on Monday announced that it would tax 100% tariffs on French products for $ 2.4 billion worth, understanding that the Google rate french penalizes US companies. While, the OECD, responsible for developing a Google rate international which seeks precisely to end bilateral confrontations of this type, has expressed hope that the rebound of this dispute will serve as a "reminder" to the governments of all member countries of the need and urgency of having a common framework.

"The sanctions project is simply unacceptable," Le Maire said on Radio Classique on Tuesday. "It is not the behavior we expect from the United States against one of its main allies, France, and in general, Europe," he added.

As he explained later in a public statement, since Monday the imminence of the announcement of Washington was known, he was in charge of reiterating to his American colleagues – who have evidently turned a deaf ear – that the French tax is not discriminatory against the North American platforms. “The French national rate on digital giants seeks to restore social justice. It is not only against American companies but also against Chinese or European companies ” who do not pay the same taxes as companies with physical presence in the territory, he stressed.

At the same time, the French Government he contacted the new European Commission on Monday to talk about the reaction of Brussels to the threats of the Trump administration and to "make sure that in the case of new US sanctions there will be a European response, a strong response," said Le Maire.

The United States threatened Monday with tariffs of up to 100% on French goods for 2.4 billion dollars in retaliation at a rate for digital services that it considers discriminatory towards its companies. Sparkling wines and cheeses they are on the list of products that would be affected since mid-January, after a report by the United States Trade Representative (USTR) stated that the French rate of technology punishes US companies as Google, Apple, Facebook and Amazon. The USTR warned that Washington is considering extending its investigation to similar measures applied in Austria, Italy and Turkey.

The announcement was made after an investigation opened in July by the USTR, which concluded that French law known as Glasses (acronym for Google, Apple, Facebook and Amazon) hurts US companies. This regulation, promulgated this year, imposes a tax of about 3% on the turnover of technology companies in France, which usually comes from online advertising and the sale of data for advertising purposes. The tax affects companies that earn annual revenues of at least 750 million euros (about 830 million dollars) in their global digital activities.

For Le Maire, the decision released now is a breach of the pact that he negotiated separately during the G7 summit in Biarritz, in August, with US Treasury Secretary Steven Mnuchin, Commerce Secretary Robert Lighthizer, and the White House economic advisor, Larry Kudlow.

The bilateral agreement, which was approved by the presidents Donald Trump and Emmanuel Macron that today come back to coincide in London in the framework of the NATO summit, implies that France will reimburse affected companies for the difference between the gala rate, which is applied retroactively since the beginning of the year, and the new international appraisal system that the Organization for Economic Cooperation and Development (OECD) is preparing to tax These companies that make billionaires do business in countries where they are not physically present.

From Paris, the Secretary General of the OECD, Ángel Gurría, has tried to reduce the tensions generated by the announcement of Washington and has insisted that this constitutes further evidence of the need for an international regulatory framework.

“I hope it is a kind of reminder and at the same time that it helps us to hurry more, not to the OECD, but to the world, the rest of the countries to accelerate, because if we have a global scheme this will avoid other tensions like these ”, He told a group of journalists. According to Gurría, the existence of an international framework will also make unnecessary "national schemes" such as French that generate this type of tension.

The Mexican has assured that the experts continue to work “intensely” in the process of preparing a proposal. "We hope to have the elements in January and that in June we can have a greater clarity", so that "during the last months of the year we can assemble the whole package" and start, from there, to implement the measures, he said.