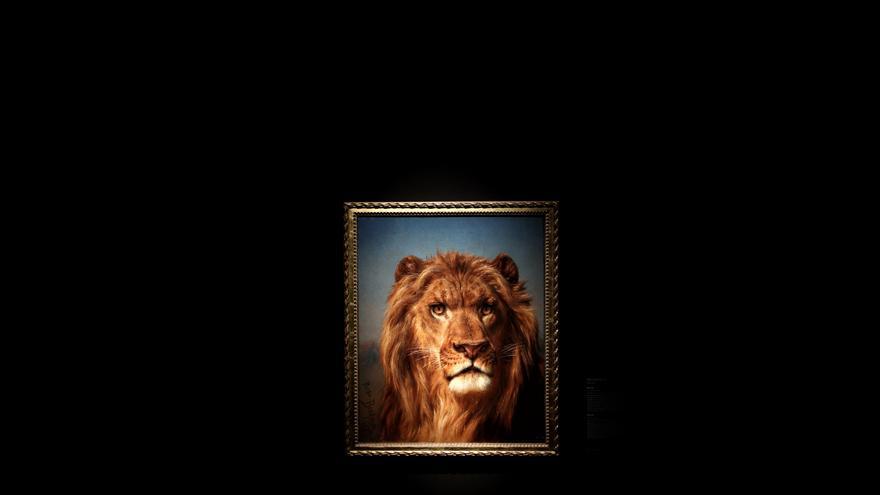 The French postal service, La Poste, has commissioned designer Valérie Besser to print a portrait of the lion Néro, everyone's favorite with whom the painter Rosa Bonheur (1822-1899) lived. It is the animal that she portrayed in 1879 in a painting that she titled El Cid. The same one that his dealer, representative and key figure in the projection and promotion of the artist, Ernest Gambart (1814-1902), gave as a gift to the Prado Museum that same year. It was the way to seal the bond that Empress Eugenia de Montijo (1826-1920) had created between the painter and Spain. The wife of Napoleon III had brought her the Cross of the French Legion of Honor for her artistic career. "Talent has no sex", recognized the Empress when decorating her. Now, when next March 16 marks the 200th anniversary of Rosa Bonheur's birth, a stamp with the imposing lion's head that has cost so much to accept the Prado will run through France celebrating one of her greatest artists. And then an international icon will be born.

Valérie Besser tells elDiario.es that it was not she who chose the topic. "I only did the design of the image that was commissioned to me. I also made models of two other different paintings. But the final choice was not mine," acknowledges the artist. Isabelle Lecomte, Le Poste product manager, tells this newspaper that the choice of paint was made by Katherine Brault, who has owned the Château de By (in Thomery) since 2017. In 1859 Bonheur acquired this castle, near the Fontainebleau forest, where he portrayed in the privacy of his home the wild nature that he tried to tame long before Claude Monet (1840-1926) did it in Giverny, with his water lilies.

The chronicles remember the painter surrounded by the same beings who later jumped onto her canvases. Rosa Bonheur made nature enter the cage of painting to observe on a whim. Her house was her studio and this was a farm where otters, deer, horses, goats, cows, pheasants, chickens, wild boars and two lions lived together. Nero was the name of the protagonist of the painting. The painter's castle today remains as Rosa Bonheur Museum, although the painter's workshop is barely shown. She achieved more fame in the United Kingdom than in her homeland and with the benefits of landing on the English market she bought her villa in By, which is a decisive place in the artist's career, where she lived with Nathalie Micas, first, and with Anna Elizabeth Klumpke, after.

In the poster that accompanies the painting in the gallery of the Spanish museum, it is made clear that the lion's head "evokes freedom, rebelliousness and courage, values ​​that the artist expresses in her own life and through the representation of animals, turned into the main reason for his work. The work was permanently exhibited on September 27, 2019, after a strong citizen demand that demanded that the museum remain in the room after being discovered in 2017, in the exhibition the gaze of the other, curated by Carlos G. Navarro. The museum had taken almost 140 years to remove the painting from the warehouses, located in Alcalá de Henares. With the reform of the narrative discourse of the 19th century rooms, the Prado has kept the lion in sight, but in a very questionable location: next to the fire extinguisher in the room dedicated to European cosmopolitan art (Baudry, Meissonier, Lenbach).

When the Musée d'Orsay opens a major retrospective in October - with a selection of 200 works, including painting, sculpture and photography - dedicated to celebrating the work of Rosa Bonheur, El Cid It will be included in the tour of the prestigious Parisian institution, as this newspaper has learned, which will serve to value this painting by the naturalist painter. "It will be an important national and international event, which will pay tribute to an exceptional, innovative and inspiring artist," they explain from the Musée d'Orsay. "The artist, known as an icon of the emancipation of women, placed the living world at the center of her work and her existence," they add.

That is the way La Poste celebrates International Women's Day, publishing the stamp dedicated to Bonheur the day before the celebration. "He wanted to put an end to the practice of relegating women to a lower rank than men for the mere fact of sex, in any domain where their intelligence or talent made them equal to them," wrote Anna Klumpke in the memoirs on the artist. And she left a rhetorical question about her partner's anti-system attitude: "Wasn't that the sign of a bold emancipation?"

Rosa Bonheur wanted to build her own life and reach the culmination of her rights and possibilities. She before she had to ask permission to be free. A century and a half ago, if women wanted to cross the city without vetoes, they had to go to the pants. The police authorized. The painter looks to the streets for inspiration: she visits slaughterhouses, farm fields, suburban roads... "My pants have been great protectors," she told Klumpke. "I had no choice but to realize that the clothes of my gender were a total nuisance. But the suit I wear is my work uniform, nothing more," claimed the artist who wanted to be everywhere except at home or in the church, accepting that the outside world was exclusively male.

The journalist Concepción Gimeno de Flaquer wrote about Bonheur on the day of his death. And he said of the painter that she abhorred and aborted the "feminine" plans planned for her, that no other brush was "more sincere and true" than hers, that she studied nature and was ahead of the Impressionists who, many years after her, they would abandon the interior of their studies to appropriate the street light. Gimeno acknowledges that she had to face a world made at their whim. "Man has constantly demonstrated a vile tendency: the petty desire to lower woman, turning her into a passive being, a mannequin, a null and blind creature, unable to walk by his side through the elevated worlds of enlightenment and intelligence" adds the Spanish journalist. Rosa Bonheur broke with the darkness to which she was condemned.