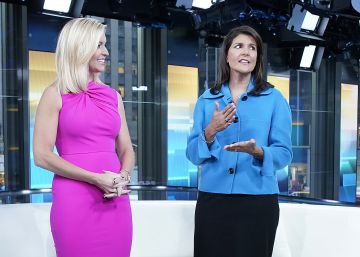 On November 13, the first day of the process of impeachment against Donald Trump, the program that ultraconservative commentator Sean Hannity has in the prime time Fox News gathered nearly four and a half million viewers. To get an idea of ​​the dimension of the figure, the six news channels that transmitted the same hearings in the Congress together added 13.1 million. It is not clear if the impeachment can hurt Trump, but what is no doubt is that Fox news It's just making it even more giant.

In October, this television jewel of the tycoon Rupert Murdoch It celebrated 17 years and eight months as the most watched news channel on cable television. But lately, given the strait link between Fox and President Donald Trump, there is an unusual affinity between its news and the White House, a dynamic action-reaction, television headlines and presidential tweets, which is taking the media group to a golden age. There are days, like last October 27, in which 17 of the 20 most watched programs on news channels are Fox.

In early 2018, for example, Donald Trump tweeted a negative message about the Foreign Intelligence Surveillance Act, which went against the official position of the White House, where it was intended to be renewed. “No one understood anything. Neither the chief of staff, nor Paul Ryan, who was then the Republican leader of the House of Representatives … but I knew what had happened, ”says Matthew Graz, who for two years has been following what Fox News says and How Trump responds on Twitter. “Minutes before that tweet, (the legal analyst of the gathering Fox & Friends) Andrew Napolitano looked directly at the camera and said ‘president, don't support this law.” This researcher from the progressive center Media Matters for America believes that the two are continually responding to what the other does, transforming it into a "snowball."

"Many blame Trump for media polarization, but it was they who created Trump and polarization," says Ken LaCorte, who was a Fox News official. “On the Internet, polarized news has more clicks. Ten years ago the media began to polarize because they seek to make money and see that the most profitable thing is to give the audience what they want to hear, ”says LaCorte, who directed the channel's website for a decade, until 2016.

In October, Hannity interviewed Trump for the thirteenth time. It was a symbolic figure: it equaled the total number of interviews granted by the president to the ABC, CBS, NBC, CNN and MSNBC networks since taking office. Hannity is the undisputed master of the night. And Trump knows that it's his bases that tune him. According The New York Magazine, The president regularly talks to the presenter on the phone when his program ends. Robert Faris, co-author of Propaganda on the web: manipulation, misinformation and radicalization in American politics (2018), explains that the president is as a prisoner of the television network like Trump's. "Fox reporters know that if they criticize the president they will have to look for work elsewhere," he says.

For Faris, Fox News has not changed but the political scenario has. “The biggest change is that Trump was elected. The chain, which has to support the views of the conservative leader, whatever it is, must now be missing the truth more than before, "he says. The Murdoch Channel, for example, was a speaker during the 2016 presidential campaign of the conspiracy theory that a pizzeria in Washington was the epicenter of an alleged network of pedophilia linked to the then candidate Hillary Clinton. A 28-year-old man came with a gun to the premises, opened fire, and was sentenced to four years in jail because of that lie spread in an informative.

“Fox News feeds the role of Trump's victim in conspiracy theories. Much of what we are seeing in the impeachment it is this. Fox News was the first to say that Ukraine intervened in the elections (of 2016, in favor of the Democrats) without having any evidence and Trump believed it, "says Graz. A few days ago, Russia’s top Security Council specialist The US national, Fiona Hill, criticized the Republicans for spreading "a fictional narrative" that supports that idea. "I refuse to take part in an effort to legitimize an alternative narrative that the Ukrainian government is the adversary of the United States and that Ukraine, and not Russia, attacked us in 2016. ” Just under 24 hours later, in the program Fox & Friends, Someone was on the phone to insist on the discredited theory. It was Donald Trump.

What is Marcelo Luján reading? | Babelia