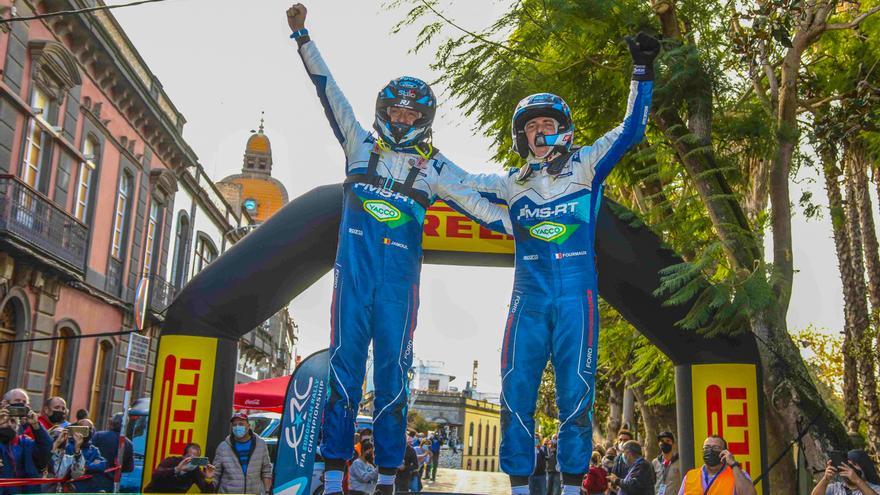 The French Adrien Fourmaux accompanied by the Belgian Renaud Jamoul, at the controls of a Ford Fiesta R5 of the M-Sport team, were the brilliant winners of the 44th edition of the Canary Islands Rally, a test in which the weather was the protagonist of the two stages competition in which the tire chapter brought the participating teams headfirst. The podium was completed by French rally champion Yoann Bonato-Benjamin Benjamin Boulloud (Ford Fiesta R5) at 25 seconds. The third place on the podium went to the Galician Iván Ares-David Vázquez with the Hyundai i20 R5, 55.6 seconds away.

The Russian Alexey Lukyanuk-Alexey Arnautov with Citroën C3 R5, who finished in seventh position at 2: 10.6, was proclaimed Champion of the European Rally Championship, a contest in which the Gran Canaria event closed the season. The ERC runner-up went to young Swede Oliver Solberg – Aaron Johnston with VW Polo GT R5, who finished fourth overall at 1: 17.4, insufficient to win the European title from Lukyanuk. The Russian adds his fourth absolute victory in the Canary Islands, having previously won in the years 2016, 17 and 18. Both the Russian and the Swede had separate road exits from which they were lucky to return to the road and continue the March.

Pepe López-Borja Rozada with Citroën C3 R5, were proclaimed double champions of the Spain Rally Championship by being the winners of the CERA (Spanish Asphalt Rally Championship) and the Spanish Super Championship of Rally S-CERA. The Madrilenian scored the scratchs in the TC + (Arucas-II), a few points of vital importance since, previously he gave everything for lost after he had a road exit in the first stage that he got off the competition. López had the CERA in dispute with José Antonio Suárez rocket with Skoda Fabia R5, which was damaged by a blow that damaged the rear axle and left the wheel open, with the difficulties that this entails for its competitive performance.

López snatched the S-CERA title from Nil Solans, who was seized by misfortune when he punctured two tires and had to drag himself through the last two sections on rim to the work park. Nil Solans- Javier Moreno, with Skoda Fabia R5, that culminated the rally in twelfth position at 2: 47.2, adding a one minute penalty, were disqualified for rolling on the rim on the link routes open to circulation. The Catalan intended to appeal. Even so, the S-CERA had already lost it in favor of Pepe López.

The Canaries Yeray Lemes-Rogelio Peñate with Hyundai i20 R5, are the new champions of the BP Las Palmas asphalt Rally competition. Lemes finished in 18th place at 3:56.2. The pilot from Lanzarote was affected by heavy rain and a slight knock on the passenger door.

The Canary Islands Rally completed one of the ‘wildest’ editions of its 44 years of sporting activity. Many vicissitudes and a lot of toughness for the island test. This edition will write a brilliant page as it is the year of the best participation with 45 cars of the top category R5 and the level of the teams. In addition, the weather was a determining factor for the final result in which the rain, fog and the mounting of tires, benefited some and harmed others. Some found their luck face to face, but most either got scared or hit their cars.

In just five months (6-8 May), the Rally Islas Canarias will once again be eligible for the ERC. This means that the countdown is already beginning to have this elite of international, national and Canary Island pilots among us again. Without time for rest, it is expected that in 2021, an event can already be enjoyed, which, although it was declared without an audience, did not lose its splendor.

The Gran Canaria Stadium hosted a spectacular trophy ceremony in which the Canary Islands podium was made up of Adrien Fourmaux-Renaud Jamoul, as winners, being accompanied by Yoann Bonato-Benjamín Benjamin Boulloud and the first classified Spaniard, Iván Ares-David Vázquez , who is resisted victory in an ERC test. In the Portuguese appointment of Fafe-Portugal, he was also on the verge of surpassing Lukyanuk. Now in the Canary Islands when he was going for the victory in the test, a puncture left him without savoring a success that resists him but that he caresses.

The intensity of the competition was reflected in the 8 scratchs, which were divided into 2 for Yoann Bonato, in a superb second day, another 2 for Andreas Mikkelsen. With a scratchs they went to Iván Ares, Lukyanuk, Solans and the TC + for Pepe López.

Cohete Suárez-Iglesias were fourth at 1: 39.1. The Asturian boar wins the love of the fans for his fierceness and dedication on the road. Satisfied with his performance, but disappointed that the CERA escaped him, José Antonio knows that it is time to successfully complete his outstanding work at the wheel.

World Cup winner Andreas Mikkelsen-Amland (Skoda Fabia R5), were sixth at 1: 48.8, making up ground after problems of making mistakes with the tire mounting in the first stage. Lukyanuk was seventh, the misfortunes were fattened with him. First the rain and then a highway exit. The eighth place went to Callum Devine-James Fulton (Ford Fiesta R5), at 2: 25.7.

Luis Monzón-José Carlos Déniz with Citroën C3 R5, they rode suffering from problems with the gearbox that ran out of fourth gear. Monzón finished in ninth position at 2: 32.4, the first classified Canarian team, winners in the Canary Islands and Provincial competition section. The satauteño has become over the years the reference of the Canary Islands in the ERC, his experience supports him.

Irishman Craig Breen-Paul Nagle (Hyundai i20 R5, closed the top ten places at 2: 39.9. Eleventh were Surhayén Pernía-Eduardo González (Hyundai i20 R5), at 2: 34.1, seconds behind S-CERA. Nil Solans-Javier Moreno with Skoda Fabia R5, they were the heroes of the rally as they were tireless fighters fighting against the adversities of having a wheel on the rim and doing two special stages and reaching the work park, where the problem was solved. But they had already lost a lot of time The Catalan finished at 2: 47.2.

A road exit almost ruined the good result of Enrique Cruz-Yeray Mujica, Ford Fiesta R5-DISA Copi Sport, in a water planing after crossing the finish line of the Gáldar section with huge puddles and almost pouring rain. The Tenerifean was fifteenth at 3: 38.8. The 2020 Canary Islands champion, finished second after Monzón in the regional and provincial Las Palmas.

Antonio Ponce-Dani Rosario with Hyundai i20 R5 were twenty-first at 5: 28.0. Efrén Llerena-Sara Fernández, Citroën C3 R5, made a rally to forget at the end of the twenty-fourth quarter at 6: 22.6, delayed by the rain and the poor choice of tires. The official Suzuki team, which returns to the Canary Islands, after two years absent, culminated with Joan Vinyes-Jordi Mercader, twenty-fifth who beat his teammate Javier Pardo-Adrián Pérez.

The ERC2 category was won by Tibor Erdi-Zoltan Csoco (EVO-X), the ERC2 and ERC2 junior and first in 2RM, it was first Pep Bassas-Axel Coronado (Peugeot 208 Rally4), champions of the category in the ERC. Llerena beat his rival Ken Torn-Kauri Pannas (Ford Fiesta Rally4), who endorsed a difference of 2: 18.1. Emma Falcón-Cándido Carrera (Citroën C3 R5), was the winner in the women’s section. His position was thirty-second.

The ERC says goodbye to the Canary Islands with a brilliant event and competition that will return in May 2021, with important changes in both the timed sections and possibly the operating location to return to the Santa Catalina park.