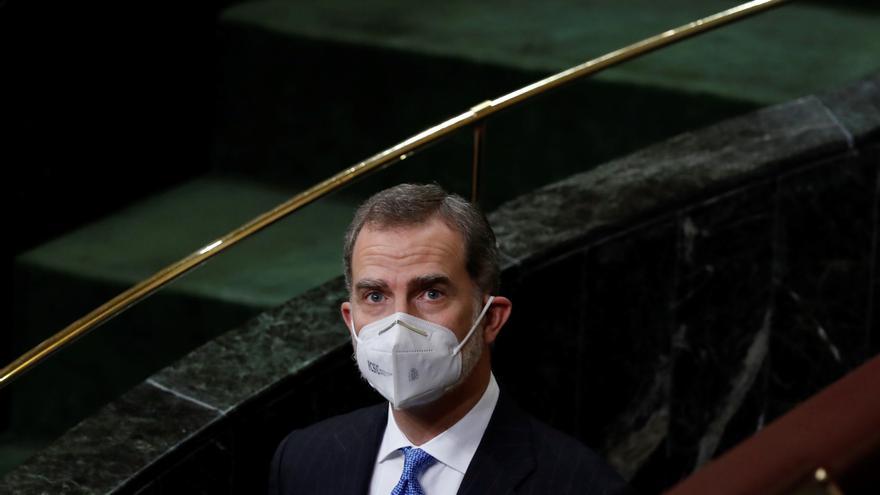 There are institutional acts mounted with all the pomp that is expected of them that have an expiration date as immediate as those messages from the new social networks that disappear after 24 hours, lest they be seen by the wrong people. Moncloa had the perfect setting – the Congress chamber – and the appropriate cast – all the main positions of the State – to launch a cable to the monarchy and the message that anyone who maintains that Spain is not a full and vigorous democracy is a uninformed dissident. The act to commemorate the 23F coup also included a recognition of the role of Juan Carlos I in 1981. Two days later, the ex-king spoiled everything. Like arriving late to a party a little touched, tripping over the table of the bottles and leaving the other guests without drinks.

On Thursday night, it was learned that Juan Carlos He has passed through the tax office again to regularize your illegal income. This time it was not 678,393 euros, which is not a small thing, but four million with which to regularize the money that had defrauded. In other words, he had not paid the public purse. That amount corresponds to all the flights obtained for free total for the benevolence of the foundation of a distant cousin, according to El País, and that represent a total amount of eight million. A donation in kind that would be a tax offense if the Treasury had found out and notified you.

Eight million in flights. You can tell that Juan Carlos is a big fan of public transport.

In his recently published book on Felipe VI, the journalist José Antonio Zarzalejos explains why “the worst adversary of King Felipe VI has been and continues to be his father”. It can be said that Juan Carlos I has confirmed this idea on several occasions and that he intends to continue doing so no matter how much the Casa del Rey and the Government do everything possible to prevent it.

There is an open investigation in the Supreme Court Prosecutor’s Office on the alleged crimes committed by the former monarch when he had already consumed his very profitable period of inviolability. The only thing we know from the investigations is that the subject under investigation continues to make extraordinary regularizations.

The solemn act of 23F on Tuesday was a clever political move. It allowed Felipe VI to connect in a symbolic way with the failure of the coup that tried to end democracy (some would say that to ‘redirect’ it, but the course of democracy is only changed at the polls). It is what the monarchy has. It is a dynastic continuity that allows the heirs to somehow receive the merits of the previous monarch in the past. Apparently not the discredit for tax crimes.

With Juan Carlos a refugee in the Arab Emirates by decision of the Royal Household, the ceremony had an obligatory absentee. What was there was his memory in the son’s mouth: “And before that unacceptable fracture of the legitimate and legal democratic order, King Juan Carlos I assumed as head of State his responsibility and his commitment to the Constitution so that they were taken, and I quote verbatim, ‘all the necessary measures to maintain the constitutional order within the current legislation’ “.

The Government thus managed to give the king an exceptional moment, well multiplied in the media on their covers, and the opportunity to have a detail with his father so that both he and his supporters do not believe that they have already decided to throw it into the garbage can to do not bother.

Moncloa also neutralized frequent criticism from the right for allegedly undermining the monarchy. How can this be true from now on when an unprecedented institutional act has been invented – it had never been done in forty years – in favor of the image of Felipe VI in these difficult times?

We are living for years in which the defenders of the monarchy and the PDP (Full Democracy Party) are going through a rough patch. They believed that Juan Carlos’ dark deals would be solved by putting the proper pressure on Corinna Larsen. The director of the CNI failed spectacularly. They believed that the worst had happened when the abdication took place, but it was a partial abdication, because the previous head of state stayed in the photograph, in a more delayed position, participating in public events on behalf of the Royal House and residing in the Zarzuela Palace. They believed that successive firebreaks to protect Felipe VI would protect him from the less glorious legacy of his father. And all were overwhelmed by the reality that Juan Carlos I is none other than the headlines of recent years. For them he will be remembered, much less for the exploits of the 70s and 80s.

Finally, they mounted an institutional act in the Congress of Deputies to get covers that would last a day and within 48 hours they received a blow in the form of four million that will remain in the memory of the people for months or years.

And now to wait for the next regularization. It will probably be faster than the Prosecutor’s Office.