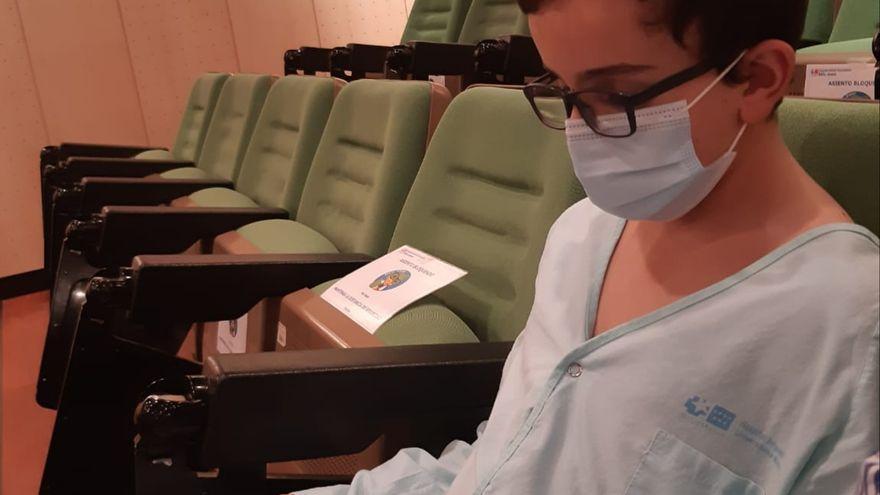 With Spain leading the way to put an end to all restrictions imposed by the pandemic, the thousand and one stories of a health crisis remain to be told that has turned our lives upside down. War scars. Nobody imagines that a child ends up in the ICU because of the coronavirus. But, in these two years, there have been several who have had to go through critical care units: a total of 52 by the Pediatric Intensive Care Unit of the Niño Jesús Hospital in Madrid since the pandemic broke out. Jorge, who turns 13 in no time, was one of them. They were four days of anguish for his family that, paradoxically, he does not remember as traumatic, says his mother, Laura Cazalis, to The Newspaper of Spain.

Jorge was discharged in June 2021. He was 12 days admitted to the hospital. Four in the ICU. Laura Cazalis reconstructs her story. The teenager spent covid asymptomatically in May 2021 (fourth wave). No one noticed. His family never knew what had happened. George introduced symptoms of a "very rare" gastroenteritis. In fact, no one associated these symptoms with pediatric multisystem inflammatory syndrome (MPIS), a rare systemic inflammatory syndrome associated with exposure to the SARS-CoV-2 virus in children and adolescents.

It is a condition in which different parts of the body may become inflamed, such as the heart, lungs, kidneys, brain, skin, eyes, or gastrointestinal organs. Many children with SIMP are known to have had the virus or have been around someone with covid-19. "It's the first thing he had. The problem is, since we didn't know that the infection had passed, it wasn't detected," says Laura. In fact, the past Christmasthe boy was re-infected with the omicron variant, again asymptomatically. The difference, adds her mother, is that this time she did not develop the aforementioned syndrome.

"It was very bad"

After that covid that was never known to have had, the teenager began to get worse every day. His mother was surprised. "He was premature, but he never got sick. The only thing, when he caught cold, laryngitis," she says. Laura took him to the doctor several times, they did antigen tests, but, since it was not positive, they sent him home. He then took him to the Niño Jesús Hospital. Everyone assumed that he continued to have gastroenteritis. But Laura did not give in. "I told them: 'I know my children (he has another older one) and they are both very hardit happens to them like me".

Most of the patients who have been admitted to the ICU for coronavirus have done so because of SIMP, which manifests itself four or six weeks after infection

Every day that passed the child was worse. She could neither open her eyes nor watch television. "It was terrible," Laura sums up. Most of the patients who have been admitted to the ICU for coronavirus have done so because of SIMP, which manifests itself four or six weeks after infection. The most frequent symptoms are fever, severe abdominal pain, and diarrhea. In Jorge's case, his very powerful immune system played against him, says Laura: "His system attacked the virus with great violence, he went crazy and attacked himself," summarizes the mother.

The truth is that the little one ended up admitted for 12 days in the hospital. Very bad, Laura insists. He was fighting his immune system so much against covid, that that battle defeated him. Her mother relates that she herself was in contact with the virus-"she has always been on top of me"-on numerous occasions. He never got infected. When her son ended up in the ICU, the doctors still didn't know what he had. They were looking for answers to that terrible state. Always sleepy. Until, after numerous tests, they asked: "Has this child passed the covid?". The mother replied that she did not know. With a test, they saw that she had many antibodies.

Laura looks back at the four days that Jorge spent in the ICU: "I don't remember it so badly because everything went well. I knew that I was in the best possible place and hands at that moment. Yes, she was very tired, physically and psychologically, because she didn't know what was happening to her." The first night in intensive care, her blood pressure dropped a lot and "she was very sick." Thanks to the medication, the situation was not complicated. Jorge reacted and the evolution was very fast. In fact, the specialists thought that he was going to spend more time in the unit. Same in room. Full speed ahead.

The boy was scared but he had a lot of strength and, finally, the memories he has of his stay in the hospital are good

But, Laura admits, no one imagines that covid will put a child in the ICU. "When, after a month, the cardiologist discharged him, he said that what he had was mitral aortic insufficiency. His heart was fine, but having multisystem failure, it did not work properly," he details. After a while, the mother started talking to the boy about how he had experienced it. When she started back to school in September, she tried it out. She wanted to know if he needed more psychological care than he had already been given at the hospital. But the doctors told him that it was not necessary. Jorge was scared, but he had a lot of strength and, finally, the memories he has of his stay in the hospital are good.

Jorge has not yet been able to get vaccinated. When he touched him, he reinfected himself with the omicron variant.

Jorge has not yet been able to get vaccinated. When he touched him, he got infected again. Doctors say that neither the cause(s) nor the pathogenic mechanisms involved in SIMP are known. Children with a history associated with SARS-CoV-2 have high levels of antibodies against the virus, but neither its duration nor the protection is clear. For this reason, the Vaccine Advisory Committee of the Spanish Pediatric Association (AEP) recommended last January for children and adolescents with recent SIMP, that the decision to vaccinate must be individualized and weigh, on the one hand, the risks of exposure to SARS -CoV-2, that of reinfection and that of severe disease and, on the other, that of the safety and effectiveness of vaccination.

A recent study carried out by the Hospital Niño Jesús concludes that fatigue is the main sequel presented by children admitted to the Pediatric Intensive Care Unit (PICU) due to covid-19. The research, led by Dr. Inés Leoz and whose results have been published in the journal 'Medicina Intensiva', has been carried out in the post-PICU consultation with more than 30 children who had been admitted to critical care units since the start of the pandemic until July 2021. The study compares those patients who were admitted for coronavirus and those who did so for other reasons.

As Dr. Leoz explains to The Newspaper of Spainin their research, the children with covid studied were previously healthy, so they were compared with others who were also healthy before entering the PICU and who were admitted for an acute illness (for example, an asthmatic attack, a traumatic brain injury, sepsis). , etc).

Jorge, during the summer, in a swimming pool.

According to the study carried out in the health center, explains the intensivist, in some patients, They saw sleep problems, difficulty joining school, anxiety, and symptoms of stress and trauma. without finding disparity between both groups of patients. The only two differences that were found is that children hospitalized for coronavirus could join school earlier but were more tired when doing activities that were normal for them, such as playing, running or walking. That tiredness was improving over time and, generally, in a second consultation, they no longer had it.

In Jorge's case, his mother did notice that last summer, after admission, he got more tired, for example, when he swam. But she has been regaining strength, although Laura is concerned about these consequences. Yes, she knows the case of another minor whose heart has been affected. As in the case of adults who were in the ICU for months due to covid, in the post-PICU consultation of Niño Jesús, the recovery of patients and their families is evaluated from both a physical and psychological point of view.

Since the pandemic began, 52 children have been admitted to the ICU of the Niño Jesús Hospital due to the coronavirus. Some, with other previous pathologies or immunosuppressed, clarifies the intensivist, those who have spent more time in the ICU. The mean age was 10 years. Most of them were not vaccinated against covid-19, because immunization in minors had not been approved at the time. With the start of the vaccination in children, the center has registered a notable decrease in the number of admissions for covid.