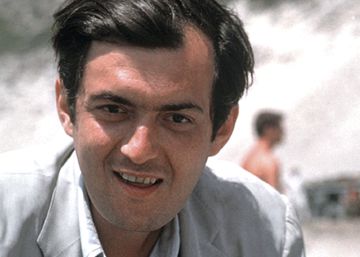 London, the city that the filmmaker Stanley Kubrick (New York, USA, 1928 – St Albans, United Kingdom, 1999) loved and incorporated into several of his films, is also the repository of new surprises about the mythical work of this genius . Three new scripts, in which he worked between 1954 and 1956, have surprisingly come to light among all the material contained in the Kubrick Archives, guarded at the University of the Arts of the British capital.

These are unfinished fragments that revolve around the same central themes: marriage, jealousy and adultery. And they coincide in time with the relationship that the director maintained during the fifties with the Austrian-born actress and dancer Ruth Sobotka, who became her second wife, although the marriage lasted only two years, from 1955 to 1957. more extensive of the three leads by title The Married Man (The married man): are 35 typed pages of a script along with many annotations and extra pages written by hand. The Perfect Marriage (The perfect marriage) and a third party called Jealousy (Jealousy) are just a few pages of sketches, projects that had just begun to stand up.

"Marriage is like a long meal whose dessert is served at the beginning," writes Kubrick at the start of The Married Man. "Can you imagine the horror of living with a woman who clings to you like a suction cup and whose whole life revolves around you, morning, afternoon and night? It's like drowning in a sea of ​​feathers. And sink deeper and deeper into the soft and suffocating depths of habit and familiarity. If only she decided to fight him. Getting angry, or getting jealous, if only for once, "adds the text found in the file of the London university.

"They are script treatments, ideas in development," Nathan Abrams clarifies by telephone. film professor at Bangor University (in Wales), author of several books about the director and protagonist of the previous discovery of unpublished Kubrick material. Just one year ago, the son of a former collaborator of the director gave the expert a lost script of more than 100 pages, in which Kubrick adapted the novel by the Austrian writer Stefan Zweig Burning secret. On the new discovery, he adds: "These three projects are united by reflections on the nature of marriage, jealousy, adultery and infidelity." Themes, after all, that soak up the entire Kubrick filmography. And that also appeared, precisely, in the script rescued from Burning secret.

"These discoveries tell us that Kubrick was working on more ideas than we knew. If they add to it Perfect heist (1956) or Burning secret, we realize that he was interested in making films about these matters even more than we thought ", continues the researcher. The writer Vicente Molina Foix, author of the book Kubrick at home (Anagrama), shares these reflections: "They are important themes for everyone, but especially for him. Talk about it also in The glow (1977), although above all he exhibited and expanded Eyes Wide Shut (1999), which can be considered as a summary of his work ".

Both scholars argue that Kubrick did not consider himself a great screenwriter and preferred to combine his creative effort with that of others, often novelists. "He was a very cultured, read and respectful director who judiciously thought that shooting a film and writing it are two very different things," says Molina Foix. The filmmaker himself refused to define himself as a "writer" and is the sole author of only the script of two of his films: The mechanical orange (1971) and Barry Lyndon (1975), both based, moreover, on novels.

Abrams adds that Kubrick used to work on many projects at the same time, but that it only ended the ones that really got him. "He was very thorough," adds Molina Foix. Hence, compared to just 13 films that rolled, has been on the way a myriad of ideas, treatments and scripts that never became films, as the famous Napoleon or Aryan Papers. "He also planned to make a film about the Spanish Civil War, although he finally dismissed it," explains Molina Foix. Something similar, according to Abrams, must have happened with the materials found now: "Probably, Kubrick did not find the appropriate point of view to develop them. It always had several fronts open at the same time and others would prevail, as Paths of Glory"

In any case, even if he only stood up to the end of 13 of the many projects he undertook, they were enough to make Kubrick one of the most important directors in the history of cinema. Among his works are classics such as Paths of Glory (1957), Spartacus (1960), 2001: A Space Odyssey (1968) The glow (1977) or his last work, the controversial and enigmatic, already mentioned, Eyes Wide Shut, who drinks from all those obsessions around the love relationships that have risen now in the new discovered scripts.

Stanley Kubrick only filmed 13 feature films and three documentary short films. First, because he never shot a story that he did not like. And second, because he needed several years to prepare meticulously his productions and a shooting time that far exceeded the usual standards. That's why he left up to 15 projects without filming, like a script that adapted the novel Burning secret, by Stefan Zweig; the movie version of the science fiction radio serial Shadow on the Sun, of the BBC; the development of a script, Lunatic at Large, about a treatment written by Jim Thompson; or your version of The Lord of the rings, offer made by The Beatles.

The 'biopic' of Napoleon. When I finish 2001: A Space Odyssey, in 1968, Kubrick faced a script that he was kneading since 1961: Napoleon, biopic about the French emperor since he was appointed general at age 25 until his death. Kubrick made locations in Romania and left mountains of material: from a definitive script to letters with the actors (Audrey Hepburn refused to be Josefina, David Hemmings accepted to play the protagonist), 17,000 images, photos and drawings … The budget skyrocketed and Metro Goldwyn Mayer canceled the project.

In 'Aryan Papers' Kubrick thought about reflecting in the nineties on his Judaism, inspired by the novel Lies in times of war, of Louise Begley, about a Polish fugitive in World War II, who would play Johanna ter Steege. But Spielberg premiered Schindler's list and Kubrick left.

'Artificial Intelligence (A. I.)'. The story The super-toys last all summer, of Brian Aldiss, about a robot abandoned by his mother, was once in the hands of Kubrick, until he felt that he surpassed it and passed it to Spielberg, who finally did direct it.