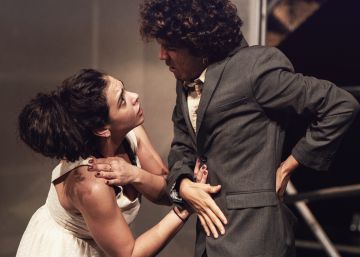 In droves, loaded with their notebooks and backpacks, a group of students in a subway car enters Madrid, worried about the agenda of the selectivity test that they have shortly. “So Galdós, does it come in or not in?” Asks one of them. "Do you have any summary? I have no idea of ​​any of his works," he adds worried. “I have one of Fortunata and Jacinta, if you want, I'll pass it on. ” The next station is announced by the megaphone and everyone, except Diana, gets off the car. Diana is left alone and for the duration of the journey from the Gran Vía station to Sol, just a few minutes, this young student dreams of Fortunata and Jacinta. When you arrive at your destination, you will appear in the subway car Benito, a tall, elegant and dressed-up boy with a hat and glasses, who will invite you to tour Madrid at the end of the 19th century and discover together the novel that the He would write years later about the moving story of these two women united in love and heartbreak for a man they called Juanito.

When 100 years have passed since the death of Benito Pérez Galdós, the LaJoven company, commissioned by the Community of Madrid, prepares a show to bring new generations to this author and journalist who knew how nobody portray the heartbeat of the city of Madrid at the time with fascinating stories. Fortunata and Benito, a musical and literary show that plays with a very current imaginary, is the title of this new montage of LaJoven, born in 2012 with the aim of bringing the classical and contemporary theater to students. The work, written and directed by Laila Ripoll, will premiere on February 7 in the Red Room of the Theaters of the Canal de Madrid, in evening and morning functions, these are aimed at institutes and schools. With the tickets almost sold out, Fortunata and Benito He will immediately start a tour throughout Spain, as part of the Galdós celebrations of the year.

In the rehearsal room of LaJoven, located in the warehouses of an old air conditioning company, in a popular neighborhood of Madrid, an overwhelming energy emerges, under the gaze of admiration of a profound knowledgeable playwright of classical theater such as Laia Ripoll (Madrid, 1964). “I have always taken into account the audience to which it is addressed. To me, who has been a sickly and obsessive reader in my adolescence, Galdós choked me until, many years later, it fell into my hands Trafalgar I read before Madame Bovary [Gustave Flaubert] what Fortunata and Jacinta And that is something that makes me reflect. In this sense, our educational system does not work well because I think there are Spanish authors who are taught badly and at the wrong ages, ”explains the playwright, who praises the figure of this writer as a great observer of life and the city, in addition to a“ passionate and progressive man, anticlerical and republican, respectful and educated, anti-bullfighting and animalist ”.

The starting point of Fortunata and Benito it is The novel on the tram, a story by Galdós, written in 1871, in which its protagonist falls asleep on the tram ride and dreams of a story of love and revenge. Here the action moves to the suburban area of ​​Madrid, and the one who dreams is a 17-year-old girl. In that dream, Galdós invites her to observe around her, to look at people and travel around the city, starting at the Cava de San Miguel, in the house of the beautiful Fortunata. Everything the author narrates and shows, the young woman imagines it with today's characters. "Galdós' novel is not only a great story of obsessions, love and heartbreak, but also a portrait of social inequalities, which takes place in a very urban environment," explains Ripoll, who has chosen a large scaffold, with a rope full of clothes lying on top, as a scenographic element for this assembly. Although focused on the history of Fortunata and Jacinta, the function includes some element of the National Episodes, in addition to reliving events of the time such as the murders of Prim in 1870 (the wedding of Juanito and Jacinta is celebrated shortly after) and Canovas, seventeen years later.

The musical numbers, eight in total, are a key element of the work. Under the musical direction of Alberto Granados, the songs and dances of the function combine the hip hop, rap or reggaeton with nineteenth-century zarzuelas or beautiful Canary Nanas.

The subway ride from Benito and Diana ends. The follow-up and the story they have made together for the lives of Fortunata and Jacinta ends when the arrival at the Tirso de Molina station is announced by the megaphones. In the darkness of the tunnel, the young woman looks for her already dear friend, but does not find him. Just keep in your hand the paper bow tie that Galdós has given you.