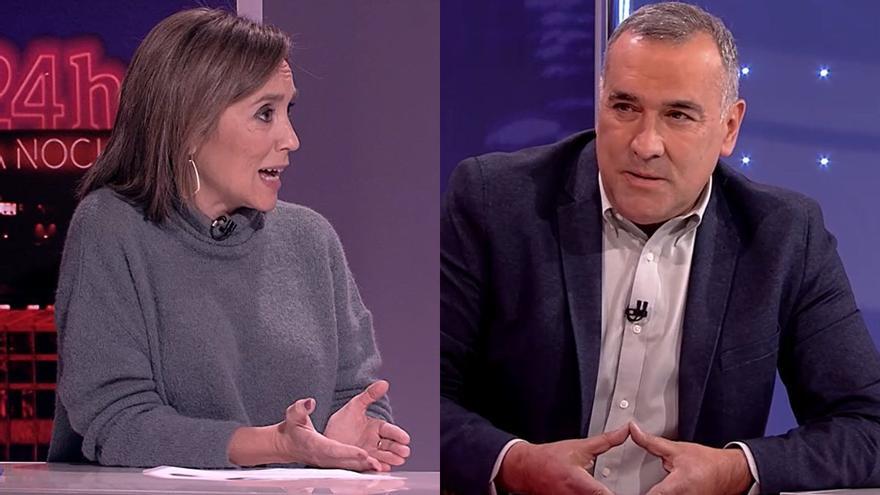 Viewers of ‘The night in 24 hours’ They witnessed this Tuesday one of the most tense interviews in the history of the program. Xabier Fortes had a run-in with Cuca Gamarra, spokesman for the PP in Congress, after this insinuated that he was whitewashing ETA During the Interview. An accusation that outraged the presenter, who later gave him the opportunity to recant.

The conversation began to go awry when Fortes recalled that, when Jose Maria Aznar was President of the Government, affirmed that it was necessary to be “generous with that world” if ETA stopped killing. “Why when you were in the Government had to explore that possibility and be generous, even though ETA exists, and now that the Government does not exist, it cannot do the same?”

“The PP has never had Bildu as a preferred partner,” Gamarra replied, stating that his party will not participate. “in this approach to whitening Bildu in the institutions”. “You are insinuating that when the PP had government responsibilities in different institutions, it gave Bildu the same prominence that it has today with Pedro Sanchez“He added later:” I do not consent to it, because it is not true. ”

“I understand that they are on a whitening task”, asserted popular politics, puzzling Fortes: “Who are you? What do you mean? Am I whitewashing ETA? “. “You are wanting to justify what Pedro Sánchez is doing by saying that we did the same. The PP has not negotiated or governed with the support of Bildu,” she replied.

Gamarra: “Maybe I have exceeded myself”

“It is clear that you think that I am whitewashing ETA, I will not go into that any more. Just understand that it doesn’t seem like a receipt “Fortes settled before moving on to other business. However, he later took up this issue so that Gamarra would have the opportunity to recant.

“I have been in this profession for 33 years. I started with 22, I am 55 and they have called me everything. This statement that I launder ETA is the most unworthy thing that they have told me live or delayed. I give you the opportunity to reflect if you want, “he said before a Gamarra who, finally, withdrew his words:” Maybe I have exceeded that statement. ”