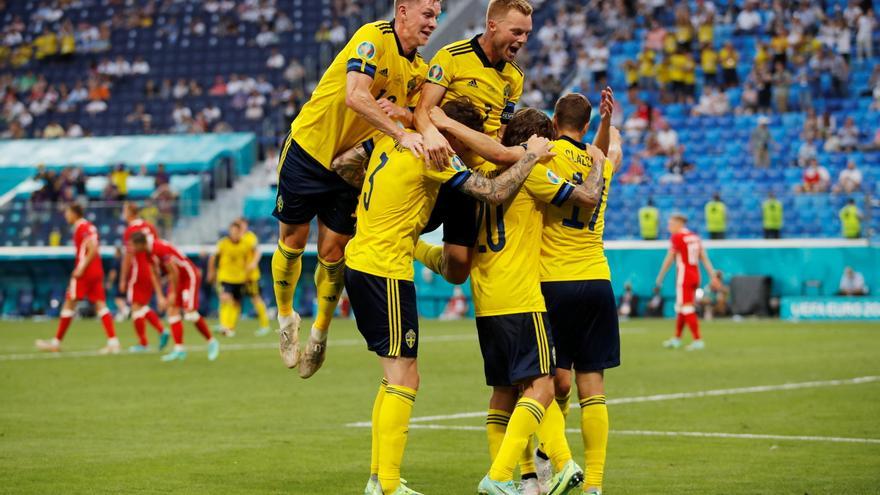 The Swede Emil Forsberg and the Polish Robert Lewandowski, who scored two goals each, staged a great duel that fell on the Scandinavian side (3-2), as Poland was taken off the Eurocup. Besides the victory, Sweden brilliantly ranked 1st of the Group E with seven points, ahead of Spain, who beat Slovakia (5-0), also removed.

The Scandinavians scored at the minute of the game, which forced the Slavs to play uphill the rest of the match. They had plenty of chances to tie, but it was Forsberg who scored again on a great play by Kulusevski.

Lewandowski, who became the Polish top scorer in the history of the European Championships, reduced distances with a house brand missile and then tied with a handful of minutes to go. The Bayern forward never stopped believing in the miracle until the final whistle. He goes home with three goals to his credit.

The match was marked by the high temperatures for the second Russian city - more than 30 degrees - and the high humidity levels. The unchanging Swedish coach grew tired of Marcus Berg and replaced him with Quaison, who forms a much more dynamic pair with Isak. Paulo Sousa recovered the former Sevilla player Krychowiak, sent off against the Slovaks. He said that he was not going to crucify him for that sin and he kept his word.

All the Polish preparation went to hell after a minute and a half of play. Isak lowered his chest a pass to the edge of the box, Forsberg took the ball as the Polish defenders were unable to clear the ball and his low and crossed left-footed shot overtook Szszesny. The game was where the Swedes wanted it. Ahead on the scoreboard and classified for the eighth as first group.

Poland was knocked out for several minutes, but eventually he caught his breath. Lewandowski was unwilling to hang up his gloves. At the exit of a corner Lewandowski finished off the crossbar. The rejection was again headed by the Bayern attacker with the bad luck that he was again spat on by the wood. The play did not end there.

Faced with Scandinavian passivity, the ball fell back to the same player, but a few inches from the goal line he was unable to get the ball into the nets. Incredible but true. From there, the Poles locked up the Swedes in their camp. The missing Zielinski forced Olsen to work hard to clear a shot from outside the box over the crossbar. Sousa's pupils were awarded the draw, but they went to rest with half foot out of the tournament.

In need of two goals, the poles went out for all of the changing rooms. As soon as he started, Zielinski again put Olsen's gloves to the test, who also saved his team a few minutes later from Krychowiak's shot. Quaison also forced the Polish goalkeeper to stretch after a defensive failure. The Swedes needed more from Isak, but the Real forward was not involved in the game.

Then, Anderson got the changes right. He introduced Kulusevski, the young Juventus star, who changed the game. He only stole the ball in the midfield, ran like a gazelle the 40 meters to the large area and there he yielded the ball for Forsberg to score the second with a shot placed at the left post defended by Szczesni. (min.59)

Poland was dead. Lewandowski did not accept the death certificate. Two minutes later, he received a long ball, faked the defender and a shell was taken out of the hat that was placed by the left squad defended by Olsen. (min.61) There was still time for a miracle. He never stopped believing Lewandowski, who scored an opportunistic goal with six minutes remaining in regulation. (min.84)

Poland tried, but the Swedish defense resisted the onslaught. Let your next opponent take note in the round of 16. Beating Sweden costs sweat and tears. When it seemed that the tables were immovable, Claesson scored the winning goal in discount and guaranteed the first place in the group to his team. Spain, second.

Incidents: Match corresponding to the third day of Group E played at the Krestovski stadium in Saint Petersburg.