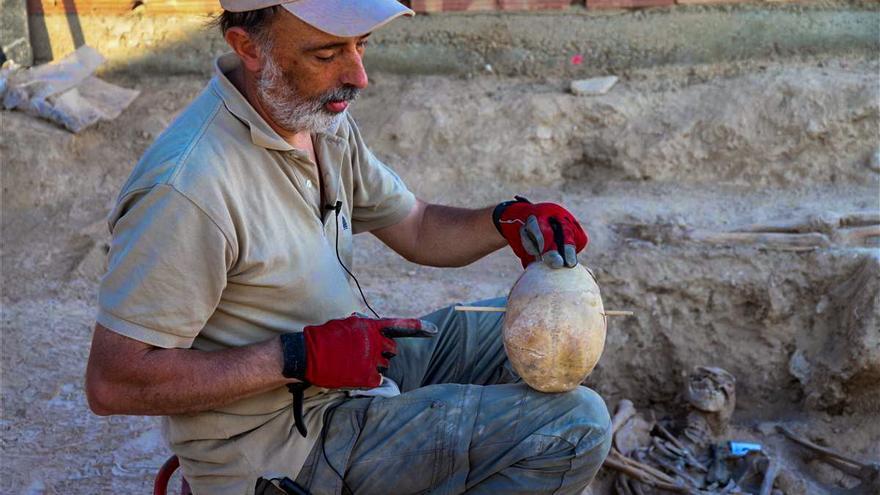 The Government’s Democratic Memory team was clear that not a single scaffolding should be placed in the basilica of the Valley of the Fallen until it was formed a commission of forensic experts to monitor and advise on each movement of bones that could be made in the eight crypts under intervention.

Thus, the Ministry of the Presidency has just appointed the seven experts for this commission. The working group for forensic advice for exhumations and the identification of the remains has the presence of two of the greatest experts in exhumations of mass graves: the forensic scientist of the Aranzadi Science Society. Francisco Etxebarria and the anthropologist from the CSIC Francisco Ferrándiz. Etxebarria and Ferrándiz form part of the commission as members (Ferrándiz is also secretary) by the Secretary of State for Democratic Memory, for which they currently work as advisers. Etxebarria had already participated in preliminary inspections of the crypts and has collaborated with the memorial movement in dozens of exhumations of graves from the Civil War. For his part, Ferrándiz is a great connoisseur of the Valley of the Fallen and had been part of the Committee of Experts that the Government of José Luis Rodríguez Zapatero created and that thought, for the first time, how the future of the monument should be tackled.

They are joined by experts who come from different forensic institutes. On the part of the Legal Medicine of Granada, Elisa Cabrerizo, a forensic doctor who is also councilor for Podemos at the Granada City Council.

Three experts come from the Institute of Legal Medicine of Madrid. Enrique Dorado, who participated in the analysis of General Prim’s body to determine the cause of his death, or of the 17th century mummy Úrsula Micaela. José Luis Prieto, doctor and specialist in forensic anthropology who is also a collaborator of the laboratory that the Association for the Recovery of Historical Memory has in Ponferrada. And Elisa Ruiz-Tagle, forensic expert in criminology, archeology, pathology and anthropology.

At the proposal of the Forensic Medical Council, dependent on the Ministry of Justice, the president of the Scientific-Technical Committee of said Council, the doctor and surgeon Rafael Bañón González, who has directed the institutes of legal medicine of Alicante and Murcia, arrives. Both Bañón and Prieto were two of the experts who evaluated in situ the state of the crypts in September 2018, so they are among the few who have close and first-hand knowledge, albeit approximate, of the terrain in which the technicians are going to move.

On behalf of the National Institute of Toxicology and Forensic Sciences, joins its director Antonio Alonso, who is a doctor in biochemistry and molecular biology, being an expert in forensic genetics; he has worked as an expert in the International Criminal Tribunal for the former Yugoslavia.

Finally, Vidal Santos Yusta, director of the Institute of Legal Medicine and Forensic Sciences of Organs with State Jurisdiction, was the forensic adviser to the Government and was present during the exhumation of the remains of dictator Francisco Franco from the Valley of the Fallen itself and its transfer to the Mingorrubio cemetery.

The Secretary of State for Democratic Memory, Fernando Martínez, signed the appointment of the members of this commission on July 12, but no action has yet been taken in the Valley.

The next step is the entry of the public company Tragsa to begin the work on the settlement of structures that will be carried out prior to the opening of the crypts and access to the different columbariums. But this phase is still “under study,” according to sources from the Ministry of the Presidency. A decision is expected to be made soon on the date on which the proceedings will begin.

With an official confirmation close to 70 requests for exhumation but which could probably be raised to one hundred, the State Secretariat for Democratic Memory works on the different files, whose bulk comes from Gogora, the memory institute of the Basque Country, which is doing an important job of centralizing and representing the requests of Basque families.

If there is no last minute change, the planned plan for the intervention would begin with the chapels located on both sides of the main altar: first the one on the right, called the Holy Sepulcher and then the other one, that of the Blessed Sacrament. In a third phase the lateral ones would be undertaken: six chapels located on both sides of the nave. The chambers of the ossuaries are hidden behind the back in the case of the two main chapels and behind a partition on which a tapestry is placed in the case of those in the nave. The remains of more than 30,000 people are stacked in boxes, some identified and others not, along different levels, some more accessible than others.

The state of these skeletal remains is unknown and the forensics will decide whether or not each of the exhumations can be carried out. And, later, if an identification can be ruled. In any case, the Government’s plan for the Valley contemplates the dignity of these crypts as a cemetery.