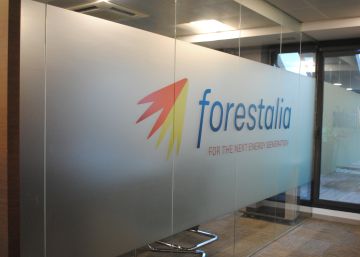 Teruel, one of the paradigms of emptied Spain, will receive a mana in the form of kilowatts. The Forestalia group will build 66 wind and photovoltaic parks in 50 municipalities in the province of Teruel in the next four years. The megaproject, which reaches 3,000 megawatts (MW) of power, represents an investment of 2,400 million euros and the creation of 12,000 jobs during construction and more than 450 million in operation, as the president of the company, Fernando Samper has advanced , in the presentation at the headquarters of the Government of Aragon de Teruel before the president of the community, Javier Lambán.

Specifically, Forestalia will develop 34 photovoltaic and 32 wind farms, which total 1,640 and 1,300 megawatts respectively. The forecast of income in the territory of more than 408 million in 30 years, through municipal taxes and land rental.

In addition to these plants, the company will promote a production facility for pellets in the municipality of Andorra, which will be the largest in Spain with a production capacity of 200,000 tons. This plant will create 60 direct jobs and more than 350 in forestry, stockpiling and logistics. Forestalia already has two plants of pellets, located in Erla (Zaragoza) and Huerta del Rey (Burgos).

According to Samper, who highlighted the government support: "This investment demonstrates Forestalia's commitment to the Spain emptied, the rural environment that most suffers from depopulation." He added: "We want to value natural, renewable and inexhaustible resources such as the sun and the wind, to give energy and prosperity to the territory against depopulation, generate wealth and employment with innovation and advanced technology." "We have a great tool to prevent people from leaving this land," he stressed.

Lambán, on the other hand, has reported that "it would have been unforgivable" not to have supported renewable energies, "which were blocked." Above all, once Forestalia "destroyed the auctions" carried out by the Government. "It is an activity full of future," he added paraphrasing the poet Gabriel Celaya. On the megaproject presented today has influenced the convergence of the three main bases: the entrepreneurial company, the commitment and commitment of the Government of Aragon and the presence of municipalities to highlight that "Teruel not only exists, but works and is an example of good work in Aragon and in Spain ".

Forestalia is currently developing projects for about 2,000 MW, mostly derived from renewable energy auctions in recent years. The main ones are the so-called Goya (300 MW wind), in Zaragoza, and Phoenix (342 MW). Goya is made up of nine parks that generate energy equivalent to that of the population of Zaragoza and will allow emissions of 314,000 tons of CO2 to be avoided each year.

This project, for 310 million, is shared with Mirova, Engie and General Electric Energy. Engie guarantees the purchase of a large part of the electricity. Engie and Mirova also participate in the Phoenix.

On the other hand, Forestalia is building a biomass plant in Cubillos del Sol (León), in the region of Bierzo, which suffers the impact of decarbonization due to thermal shutdowns. The estimated investment, when the construction is finished, rises to 100 million and another 50 of operation. It also plans to create 300 jobs.