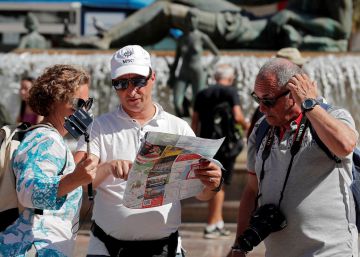 In September, 8.9 million foreign tourists traveled to Spain, which is 0.2% less than in the same month of the previous year, according to the INE published on Monday. The number of visitors is thus reduced for the third consecutive month, closing a high summer season of declines compared to last year's figures. Competition from other Mediterranean destinations, such as Turkey, Greece, Tunisia or Egypt, has already been noticed last summer, that closed without a record for the first time in seven years. However, in the accumulated of the year the number of tourists continues to rise, as well as the expense, which grows compared to last year although there are fewer visitors.

The instability of the eastern Mediterranean countries lent tourists to Spain in recent years, which favored the Spanish tourist boom. The recovery of these destinations, whose tourism figures have been galloping for a couple of seasons, is especially noticeable in the sun and beach holiday segment, in which they compete with Spain with very competitive prices. In addition, other factors, such as the economic slowdown (Germany, the second Spanish market, are technically in recession) or Brexit (United Kingdom is the first) or weather factors also weigh in the tourist slowdown in Spain.

In summer this competition is even more noticeable and proof of this is the data for the three months of the high season. The fall of September in the number of tourists, 0.2%, up to 8.9 million, adds to those of August (-0.5%) and July (-1.3%) compared to the same months of the last summer. In total, 28.9 million foreigners visited Spain in the three months, 0.7% less than the previous summer, more than 200,000 fewer tourists. On the other hand, in the accumulated year, the numbers are still positive: 67.1 million foreign tourists have come to Spain, 1.25% more than in the same months last year.

The declines in these two markets are especially noticeable in the Balearic and Canary Islands, the two destinations most appreciated by these markets and those most affected by the bankruptcy of tour operator Thomas Cook. The number of tourists fell 1.2% in the Balearic Islands and 8.4% in the Canary Islands. Madrid also registered a decrease of 4%.

Despite the decrease in the number of tourists, spending continues to rise, the equation sought by the sector and the authorities: containment at arrivals and increased profitability. Thus, in September, tourists who visited Spain spent 9,705.7 million euros, 1.68% more than a year earlier, with which the accumulated of the year already exceeds 73,830 million euros, 3% above the last year. With regard to the average expenditure per person and day, a more revealing data of what remains at the destination – the general data includes transport, which remains in the country of origin -, amounted to 151 euros, a 2 , 75% more. So far this year, this figure amounts to an average of 153 euros, 5.69% more.

What follows the downside is the average duration of travel, which stays at 7.23 days, 0.85% less compared to September 7.29 last year. They are 18 consecutive months of reduction of the duration of the stays.