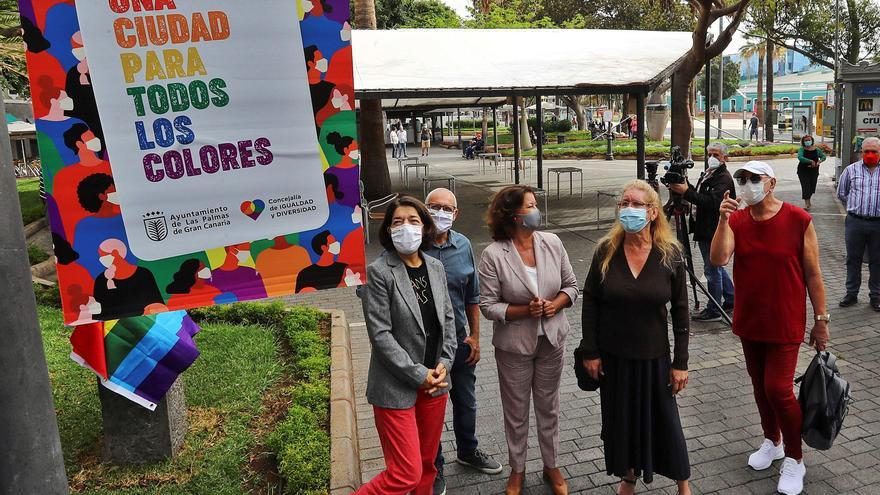 For the freedom to be and to love

This is revealed by the latest report of the Ministry of the Interior, which figures that crimes related to sexual orientation and gender identity have increased by 8.6% compared to 2018, which translates into the third cause of all crimes. hate crimes in Spain. And the fact is that social advances in matters of equality constitute a terrain as valuable as it is fragile, and the journey towards the horizon that challenges us requires memory, commitment and a loud voice.

For the freedom to be and to love

These three vertices met yesterday in Parque Santa Catalina, a reference space for the LGTBIQ + collective in the Canary Islands that, as Ramírez recalled, stands both as a meeting place and protection as well as in the scene of the greatest virulence and police repression of the State . Within the framework of an act led by the Councilor for Equality and Diversity, Mari Carmen Reyes; the councilor for Public Services, Inma Medina; and the general director of Diversity of the Government of the Canary Islands, Víctor M. Ramírez, as well as by various representatives of the LGTBIQ + movement in the Canary Islands, the Santa Catalina Park yesterday unveiled a plaque commemorating the historical value of the struggle for the rights of the LGTBIQ + community. In addition, the plaque includes a QR code that links to the Canary Islands Government’s historical memory website, in which the reasons that justify this historical relevance are detailed.

This initiative, promoted and financed by the Department of Equality and Diversity, is part of the Strategy for the Historical Memory of sexual and gender dissidence in the Canary Islands of the General Directorate of Diversity of the regional Executive, which promotes the significance of places and monuments in various emblematic places of the Archipelago, as well as their willingness to “repair” in some way the bill that the group paid for their visibility.

This first tribute to the shelter of the world anniversary coincided yesterday with the support of the Parliament of the Canary Islands to the proposal of the Law of Social Equality and non-discrimination based on gender identity, gender expression and sexual characteristics, which has been ruled for its final approval in the next plenary session. This new law has been in Parliament for more than a year and was promoted jointly by all groups although, in the process in presentation and commission, the Popular Party (PP) has been unmarked and has finally opted for abstention because In his opinion, the final wording hides “the queer doctrine.”

This new law establishes the free self-determination of gender identity and expression, without medical conditions or of any other type, and protects the health, labor, family, educational and administrative rights of trans and bisexual people, according to the speakers, which emphasized the innovative nature of this standard in Spain and Europe. The rest of the parties regretted that the PP excluded itself from the consensus and trust that in the plenary session of Parliament the final vote will be unanimous.

In this regard, the president of the Gamá LGTBI Collective, Montserrat González Montenegro, welcomed this news, but emphasized the importance of this regulation prospering and being consolidated at the national level. “What does not make sense, and that everyone knows, is that some autonomous communities have more rights than others in this country. Real equality will only come with the state LGTBI Law “, stated the president in the framework of the presentation of the Let’s Walk the Road campaign, an informative video promoted together with the bus company Global, which reconstructs the most significant legal milestones in the trajectory of the achievement of rights and freedoms of LGTBIQ + people in the last 50 years, in the Canary Islands and in the rest of the country.

This video, which will be projected on about twenty vehicles with Global screens, recalls that, on May 17, 1990, the World Health Organization (WHO) depathologized homosexuality and removed it from its list of mental illnesses, and that It was not until 2018 that transsexuality was also eliminated from this relationship. In addition, in 2014, the first Law that protects the rights of trans people was approved in the Canary Islands and that regulates two protocols, health and education, pioneers in Spain; Since, since 2020, the LGTBI Equality Law and the Law for the Equality of Trans Persons are still pending debate and approval. «The buses have changed. Society too. Let’s walk the road ”, reads the slogan.

The Congress of Deputies will vote today if the trans law proposal registered by ERC, JxCat, Más País, Compromís, the CUP and Nueva Canarias will be processed, a text similar to the draft prepared by the Ministry of Equality, which is blocked by differences within the Government. The position of the PSOE will be precisely the key to tip the balance and that the Lower House begins to study a text -designed by the Federation Platform Trans- that depathologizes transsexuality and regulates gender self-determination, allowing the change of registered sex without the need for report or medical treatment. In an institutional statement on the occasion of the International Day against LGTBIphobia, yesterday, the Government promised last week to promote a “legislative package” that will recognize that trans people do not suffer from any pathology, as the World Health Organization has already done ( WHO). |

On the left, and in the first image above, the inauguration ceremony of the commemorative plaque in homage to the struggle of the LGTBI community promoted by the Government of the Canary Islands and the City Council of Las Palmas de Gran Canaria in Parque Santa Catalina. Above these lines, the presentation of the informative campaign “Let’s walk the road”, by the Gamá y guaguas Global Collective,