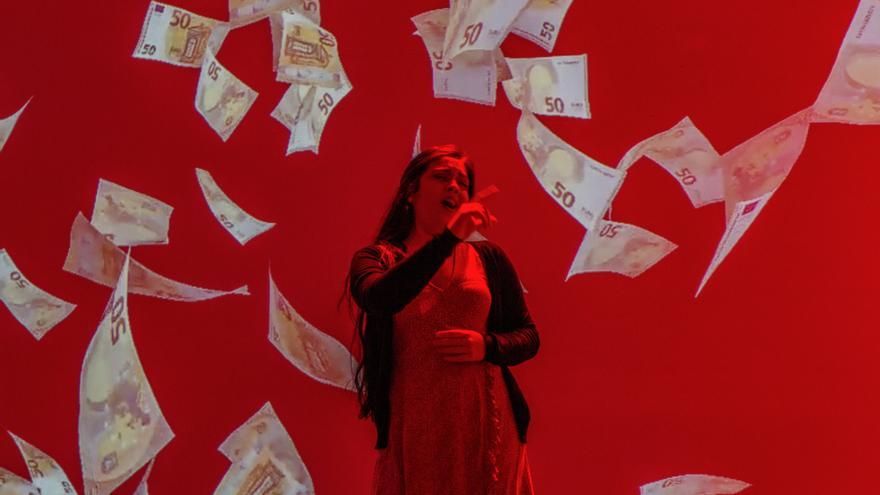 Madrid, May 5 (EFE) .- “For sale”, an attempt to bring zarzuela to the 21st century, is “a miracle” that sees the light this week with almost everything against it: first because of its gender, reviled as “casposo” , but, above all, due to the unexpected abandonment in the middle of the project of its main sponsor, RTVE, claiming that it “squeaked.”

“It casts shadows that are those of disease, corruption, nationalism, social networks and censorship as a reflection of what is happening in Spain today, but with images of governments since 1980,” he explains to Efe the author of the libretto, JM Fernández Shaw, one day after its premiere.

This will not be in the Monumental Theater of Madrid, headquarters of the RTVE Orchestra, as initially planned, but in the humble space that its promoters have in the capital, the also humble El Instante Fundación, with only two screenings that will be held this Thursday and Friday.

Its genesis dates back to a previous collaboration for the Prado Museum, when together with the public entity the possibility of “placing the zarzuela in the 21st century due to its music, libretto, scenography and its spatial conception” was raised. However, in May 2020, “with the project quite advanced”, RTVE communicated by letter that it was withdrawing under COVID-19 protection.

“But before that, the reasons were that the libretto and the music ‘squeaked’, why did we put ‘To the thief, to the thief’ and ‘Let’s save corruption’, what was that. That’s why we decided to do it here, in a space freedom, not subject to censorship, “says Shaw.

His impression is that until then “no one had read anything.”

“And when they read it – he adds – someone found it inappropriate”, including the contributions of the intellectuals Ignacio Gómez de Liaño and Antoni Muntadas, among whose “political sayings” appears one of the most famous glosses of the former secretary general of the PP María Dolores de Cospedal: “Whoever does it pays and everyone holds his candle.”

Even without his “great partner”, El Instante decided to move on. For this, it connected living arts professionals with young people from the Madrid Festival Orchestra (its resident orchestra), the Young Philharmonic Choir, the Reina Sofía School and the Aula de las Artes at the Carlos III University of Madrid, offering a tailor-made result. of these times.

“Young people do not go horseback riding, but chat. Society has evolved and what this zarzuela offers is current, with some protagonists who are women of the 21st century, warriors with a lot of character who know how to sing, dance and sell themselves without needing anyone, “says mezzo-soprano Sandra Pastrana.

She is one of the “celebrities”, along with the sopranos Soledad Cardoso and Maylín Cruz, who participates in an auction of speeches and supposed truths directed by the baritone Xavier Mendoza, under the watchful eye of a group of girls and boys who chat while they consume images from day to day.

The stage director José María Sicilia has sought precisely that between the music, the text and the images that are projected, a conversation of mistrust is established, at a time when the most eroticized sense is the view through advertising, which is He has eaten it all. ”

In this game of mirrors, of reality and fiction in which it is not known who is a member of the public and who is in the play, the cast is completed by the actors Miguel Marinas, Ignacio Vicens, Paula Calvo, Guillermo Ruiz, Sara Alonso, Judit Mentado , Jordi Moya and Cristina Feito.

“It is a work that has this idea of ​​calling to use the conscience. Each phrase makes us think about where our society is going and what we want to do with our time,” says the musical director, Albert Skuratov, who also highlights the quality of the score .

Composers Jesús Rueda, David del Puerto and Javier Arias, three lovers of zarzuela who had not been born when it was already “something that had disappeared” and who for a long time had fantasized about the idea of ​​”unearthing it and resuscitating it, have been in charge of the music. “.

“There is a certain aversion of the intelligentsia towards it for considering it a crude, old-fashioned product, but in the 19th century it was totally political, like Barbieri’s. Many were censored for purely ideological reasons, so it has been a much more combative genre than the opera on the Spanish stages “, defends Del Puerto.

Among salsa, chotis, pasodobles and rock and roll, they have included “popular music in an update with intelligence, as Joaquín Sabina did with ‘Y nos gave las ten’, which is sung by everyone without knowing that it is a waltz”, or how ” if you go to the Plaza de Lavapiés, you’ll hear reggae mixed with a Cuban son “.

“If you take all those popular elements typical of the traditional, mixed with the other, this comes out”, they conclude about a work that plays to maintain the purity of the zarzuela and to break it and that has not stopped mutating from its birth to its premiere in the morning.

It is not a saying. As Shaw warns, at the time of writing these words, those responsible are waiting on the phone in case the artists who appear in one of the videos “self-censor”: “And if it happens, we will incorporate it into the work and explain it.”