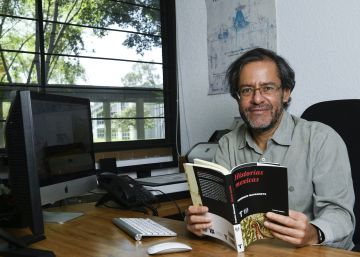 When he was a boy, the history student Federico Navarrete wondered the three souls of the Mexica (head, heart and entrails). Of all the pre-Columbian past of Mesoamerica, it was the spirituality of its peoples that most struck him. "What would it be like to think with your heart?" He asked himself. "Although I am an atheist, I was struck by the fact that there were other cultures in which the idea of ​​the soul was so different from the Christian," recalls the 55-year-old Mexican historian.

The contrast between cultures, the present perception of past times, the Western explanation of peripheral worlds would eventually integrate the core of his work. Or at least an important part. If the conception of Mesoamerican space-time of the 15th century is essential in its work, lin a way to tell and explain the conquest it is not less. Navarrete, member of the prestigious Institute of Historical Research of the UNAM, presents novelties in both fields.

The Turner publishing house has just published its latest book, Mexican Stories, an essay that uses old legends Aztecs to explain that his conception of space and time – cronotopo, he says, taking the concept of Albert Einstein – is very different from ours. Surprisingly, he explains, "in the imperial chronotope Mexica -in the first two decades of the sixteenth century, shortly before the arrival of Hernán Cortés in Veracruz-" his era would conclude by a force that would come from outside. That is not different from how we live in the present, with environmental catastrophes, with this apocalyptic fear, fundamental in contemporary culture. "

Question: Why talk about past temporalities?

Answer: It is the exit that I have found to solve the problem between myth and history. Traditionally, history is understood in a linear, unique and universal time. It is the time used by archaeologists and most historians. I am interested in explaining other forms of temporality without falling into the dichotomy between real time and mythical time. In these last 20 years, faith in progress, linear time, has entered into crisis. That is why I wanted to revalue other forms of temporality.

In April, he and other historians set out Noticonquista, a Twitter account with thousands of followers that counts the events of the conquest in real time. As if today was a day of July 1519.

Interpreter born from the microscopic plane of history, Navarrete likes to imagine exchanges 500 years ago. He has written novels in which he gets into the skin of inhabitants of Tenochtitlan, the imperial capital of the Mexica.

P: How do you imagine that first interaction, the first group of Spaniards with the Tainos of the Caribbean islands?

R: They must have been very complicated negotiations. I imagine experiments from both sides. For the Indians, the first question was probably something like what body do they have? What kind of body, human, divine, animal? And that could determine the food, exchanges of food. If they eat like us, they are men, but what kind of beings are they, gods, animals?

"The theme of the conquest has always been fundamental," says Navarrete. "First, because I think that in Mexico it is perceived as a gigantic and ominous, terrible, brutal event, and at the same time a founding event of what we are, people always use feelings to talk about conquest. He says that he is afraid of conquest, that he is anguished, that he is sad, angry, and indignant.There is a very emotional question: on the one hand, we are convinced that he determines us, defines us as Mexicans, on the other hand we see it as something terrible, a defeat, a catastrophe, an injustice, it's a myth of a very dark birth, a damn inheritance. "

Just for the above, Navarrete and other colleagues launched Noticonquista. And in addition, they opened an account to one of the most outstanding Indian chroniclers, the soldier courtesan Bernal Díaz del Castillo. "We Mexicans need to recount that story, I have realized, now that the commemoration of the fifth centenary of the arrival of the Spaniards begins, that for the Mexicans the conquest is not past." People talk about the people of the conquest, Cuauhtémoc , Moctezuma or Cortés, as people you know, people in the family, people hate them, admire them, but when you talk to them about Villa or Zapata, they are heroes of a remote past that has nothing to do with them. "

Internet the most dangerous place for female journalists, according to an RSF report

Internet, the most dangerous place for journalists, according to RSF report