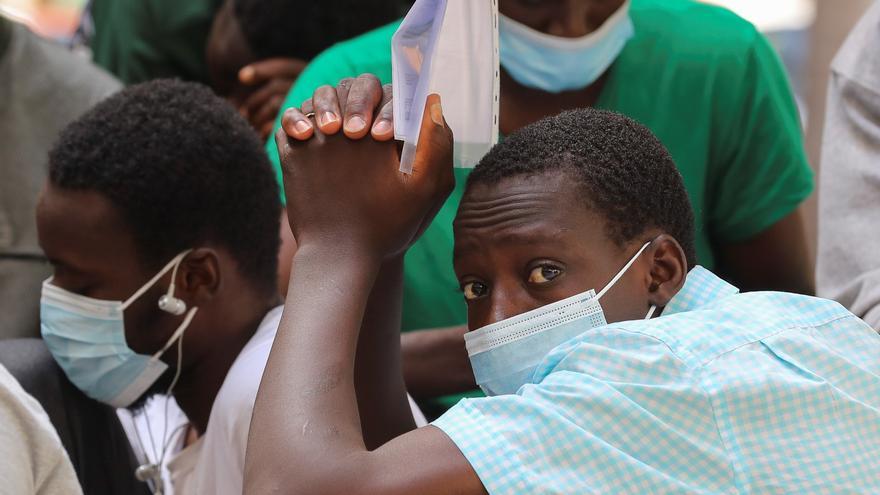 On September 20, the European Commission’s New Migration and Asylum Pact was published. There were many of us who were waiting for these new general lines and who had placed our hopes in a common migration policy that would change the focus of security for a more based on Human Rights.

Far from basing migration policy on the reception of migrants and refugees, the new Pact crystallizes border control policies and broadens them in terms of reinforcing Frontex and externalizing borders. As if that were not enough, the new document includes a kind of “à la carte solidarity” in which the member states can decide whether to welcome or “sponsor the return” of said people through financing to the countries that suffer the most migratory pressure. .

This is the case of Spain, a border country that has had to manage migratory pressure practically alone in Ceuta, Melilla, Algeciras and now, mainly, in the Canary Islands. This is also the case in Greece, Italy and Malta. Countries, where the right and the extreme right have taken advantage of the accumulation of migrants and refugees in camps or in the CIEs to make the policies of hatred and rejection grow and thereby win a handful of votes.

Undoubtedly, this new Pact is a victory for the northern countries and especially where the extreme right governs, which has conditioned the solidarity of the different peoples of Europe. A solidarity that is constantly expressed through a society focused on humanitarian aid and that ranges from the Autonomous Communities, Town Halls, local entities and professionalized NGOs to the neighborhood associations of the smallest towns in the European geography. Unfortunately, the different European societies have shown and are proving to be more at the level of their governments in terms of humanity.

Faced with this situation, the Government of Spain has an important challenge. We understand the difficulty of negotiating policies at European level different from those that the European Union has been applying up to now, but we have a moral duty, and not only moral, but also from the point of view of International Law, to be up to date. the height of a migratory and refugee challenge that UNHCR considers unprecedented worldwide.

Motivated by ignorance of the position that our Government wants to take in Europe, last week we questioned Foreign Minister González Laya. It should be said that the minister’s response pleased us, on the one hand, but made us uneasy on the other.

González Laya first announced six positions to defend before the rest of the member states that we want to analyze. First, the Government believes that reception capacities and facilities must be expanded and increased, especially for women and children. It is undoubtedly good news if we talk about welcoming and especially focusing on the most vulnerable, now, if what we are talking about is expanding the capacities of the Foreign Internment Centers (CIE) or the Reception Centers Temporal de Extranjeros (CATE), means that we are going to delve even more into the problem that these centers are generating regarding the violation of Human Rights. The CIE and CATE continue to deprive of liberty people who have not committed any crime but a simple administrative offense and who should be able to enjoy their liberty.

The following measure announced by the minister seems to us entirely correct. It is about the request by the Government for access to all basic public services for all people, regardless of their immigration status, that is, without making a distinction between economic migrants or refugees. In this sense, it is urgent that Spain set an example with the hundred minors of compulsory school age who have lived in Melilla for years, some born in the Autonomous Community itself and who continue to go out of school despite the ruling of the International Committee of the Rights of the Child of the United Nations that obliges Spain to school them and the pronouncement of the Ombudsman himself.

Third, the minister spoke of a new agile and supportive system that allows the rescue and responsible disembarkation of boats intercepted in the high seas. This is also a very important issue and it should be noted that the new Migration and Asylum Pact includes it adequately thanks to a resolution of the European Parliament that finally stops criminalizing NGOs or fishing boats that rescue people in danger of shipwreck in high seas, thus preventing human beings from dying trying to cross the sea without conditions to do so and in compliance with international law.

Fourth, the Government is going to rely on fast and safe procedures to determine if the people who arrive are refugees, that is, possible asylum seekers or economic migrants. The truth is that it is hard to believe that you can be quick and guarantee the human rights of these people at the same time. To ensure this question, we cannot rely on the nationality or origin of said people since there are countries that are not necessarily in conflict where people’s human rights are also violated by reason of ethnicity, gender, gender identity, religion or tendency. sexual and that at the moment the EU and Spain consider them “safe countries”. This is the case of Morocco, Algeria or Turkey.

The fifth measure that the Spanish Executive wants to promote is the return of all migrants who have entered irregularly and who do not have the right to international protection, according to the EU. As we said in the previous point, if the criterion is origin or nationality, people who have suffered human rights violations at origin and in transit can be considered as potential irregular migrants to return to their countries of origin, thus committing an injustice.

Sixth, the minister wants to bet on regular migration routes to fight the mafias, although she is also of the opinion, which we do not share and that it would fall within the framework of the criminalization of NGOs, that there are “well-intentioned” people or organizations. that promote the mafias trying to help irregular people to cross the border. It is vitally important that the Government is committed to legal and safe ways to fight the mafias and to be able to guarantee a true compliance with human rights. Only by obtaining visas at origin or in transit can we guarantee that these people arrive in Europe without being exploited or mistreated by criminal organizations and without the need to reinforce police controls at our borders with huge amounts of money. It is better that we allocate this funding to the reception and insertion of these people who, after all, are only looking for their survival or a better life for themselves and their families.

We disagree with the Government that the agreements that Spain has with Morocco on migration policy are an example to follow for the rest of the European Union, since they are a clear model of externalization of borders and of delegation of our duty of reception and respect for international law, to third countries where the rights of these people are systematically violated.

On the other hand, we see with very good eyes that the Government wants to promote humanitarian diplomacy, a public diplomacy that civil and Spanish actors have always exercised at the service of cooperation and solidarity and that without a doubt are always our best letter of introduction international and help us in good relations with third countries.

Finally, the minister announced that these measures will be discussed on November 26 at the South Neighborhood meeting in Barcelona, ​​we hope that with the motion that will soon be debated in the Senate we will have time to clarify some of these measures and take a position agreed through a process of participation with the different Autonomous Communities, City Councils, NGOs and other civil actors as requested by the motion itself.