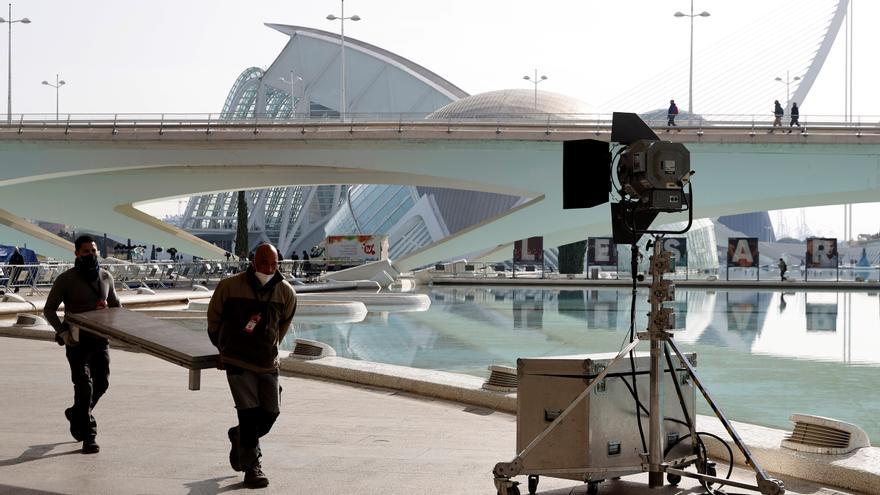 The Goya Awards 2022 are celebrated this Saturday in the Palace of the Arts of Valencia within the 'new normality' and with novelties such as the absence of presenters or the return of the public to the stalls. The event starts at 8:00 p.m. with the celebration of the traditional red carpetin which we will see all the nominees for the Goya 2022 parade, companions and deliverers.

This year's gala, which starts at 10:00 p.m., pays tribute to the filmmaker Luis García Berlanga, and as announced by the president of the Film Academy, Mariano Barroso, the references to the Valencian director are going to be continuous. "There will be a lot of presence of images of his films, of him and of references to Berlanga from the start of the ceremony until the end," said Barroso.

Inma Cuesta, Juan Diego Botto, Belén Cuesta, Bárbara Lennie, Carmen Machi, Antonio Banderas, Ángela Molina, Nora Navas or Paco León are some of the figures that will participate in the great festival of Spanish cinema, which this year commitment to a "new model" formed by several presenters instead of the classic master of ceremonies or couple of presenters.

The gala of the Goya 2022 will feature a performance by C. Tangana, one of the musical stars of the moment, who will sing live alongside the young artist Rita Payes. Joaquín Sabina will also perform, who will reappear on stage after a time of absence. For its part, Baby Y Christina Castano will open the ceremony and the humorous part will come from the hand of Full pantomime.

'The Good Boss' by Fernando León de Aranoa, with a record of twenty nominations, starts as the favorite in the 36th edition of the Goya Awards. León de Aranoa's labor satire will compete for the award for best film with 'Maixabel'a film about ETA terrorism by Icíar Bollaín with fourteen nominations.

Welcome to the live broadcast of the Goya Awards 2022, the great annual event of Spanish cinema. The Palau de Les Arts in Valencia will be the setting for a gala that will begin at 10 p.m.. Previously, at 7:30 p.m., the protagonists will begin to walk the red carpet.

In the award ceremony of the 36th edition of the Goya, they will also participate by handing out prizes, Goya winners of the last edition, which could not physically attend Malaga due to the health situation due to covid-19.

C. Tangana, author of the best-selling album in Spain in 2021"El Madrileño", will be the highlight of the musical performances at the Goya 2022. The singer, producer and composer from Madrid, winner of three Latin Grammys and nominated for a Grammy, will sing live together with the young artist Rita Payés.

Their names are added to those announced a few days ago Luz Casal and Joaquin Sabina who, accompanied by Leiva, will go on stage for the first time since his eventful performance at the Wizink Center in Madrid on February 12, 2020.

The gala will start with a musical number starring the actresses and singers Bebe –Goya for Best Original Song for 'Little Time' from the film "The Education of Fairies"–, Jedet –Ondas Award for her role in the series "Veneno"– and Cristina Castaño, who He has participated in musicals such as "Fama" and "Cabaret".

The favorites of the Goya 2022

In the awards section, a film starts with the favorite poster and, in addition, in a very prominent way: 'The good boss', the film by Fernando León de Aranoa starring Javier Bardem.

The film swept the candidacy announcements opting for 20 statuettes in different categories, being the most nominated in the history of these awards --The previous record was held by 'Días contados', by Imanol Uribe, with 19 candidates--.

The Academy has also confirmed the attendance at the ceremony of the four Spanish Oscar nominees this year: Penelope Cruz, Javier Bardemthe composer Alberto Iglesias and the short filmmaker Alberto Mielgo.