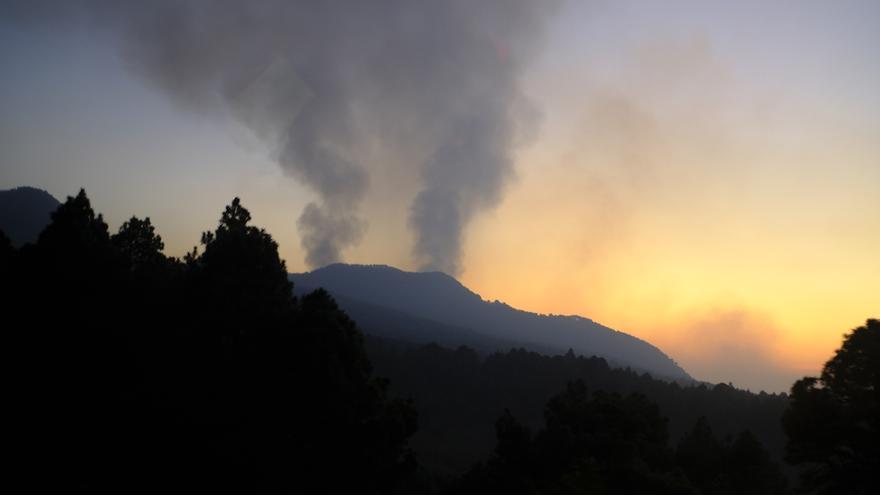 After a month since the beginning of the eruption of the Cumbre Vieja volcano on the island of La Palma, the area affected by the lava has already reached 763 hectares and 1,956 buildings destroyed, according to the latest report from the Department of Homeland Security (DSN) issued early this Tuesday.

National Security has also reported that the eruption continues and the main flow of the lava flows runs along the north flank, descending the northern part of the previous flows, following trajectories towards the west and northwest, and within the current exclusion zone.

As for the laundry that could reach the sea again, located southwest of the La Laguna mountain, it is located about 160 meters from the coast, although in recent hours it has slowed its progress to two meters per hour.

Air traffic at La Palma airport remains operational this Tuesday, but with delays in inter-island flights caused by the volcanic ash cloud, which already forms a column 4,200 meters high; Tenerife airport also operates normally, although yesterday Monday there were flight cancellations and diversions.

The direction of PEVOLCA, Special Plan for Civil Protection and Attention to Emergencies due to Volcanic Risk, has recommended to the population of El Paso that, between 2:00 p.m. and 9:00 p.m., stay indoors in view of unfavorable weather conditions for air quality that announce the intrusion of haze and wind from the sea.

Meanwhile, the DSN has communicated that today the face-to-face classes have been suspended in the two educational centers of Tazacorte due to the possibility that the lava reaches the coast and after yesterday, Monday, more than 4,500 students and almost 600 Aridane Valley teachers will resume classes after one month.

From the National Geographic Institute (IGN) the data indicate that since last midnight the seismic activity on the island of La Palma has decreased slightly in relation to previous days, with 14 movements registered in the first hours of this Tuesday, most of they in Fuencaliente and only three in Mazo.

In the last hours, the earthquake with the greatest intensity, of 3.9, has taken place in the municipality of Fuencaliente, 37 kilometers deep, according to IGN measurements.

The Vice President of the Government and Minister of Economic Affairs and Digital Transformation, Nadia Calviño, has advanced this Monday that the Executive is recalculating the impact of the eruption on the island’s technological ring and is preparing some 40 million euros to enhance the optical connectivity of the Canary Islands Institute of Astrophysics (IAC) in La Palma.

Calviño hopes that the investment can begin to be deployed this year 2021 so that the island, and also the entire Canary Islands, is configured as a ‘hub’ of connectivity between continents, improving the connection with the submarine and terrestrial cable.

The minister stressed that the Executive is involved “100%” in addressing the “cataclysm” that the volcanic eruption on the island has entailed. with “hard times”, but at the same time working, hand in hand with the Government of the Canary Islands and the Cabildo, in taking measures for “there is a future.”

For this reason, he commented that the three administrations are working to “identify emblematic projects” on the island that help to achieve the diversification of the economy through the investment of European funds, and in that sense, he has also highlighted the interest in the archipelago becomes a audiovisual hub.

Calviño, who this afternoon meets with a representation of businessmen affected by the eruption, has also detailed whatAt the end of the week the Insurance Consortium will pay 6.5 million to the victims, with a total of 611 indemnities, 500 of them corresponding to dwellings.

He has also commented that 152 companies on the island have accepted the ERTE specific elaborated by the Government, with 758 workers.

The minister has taken advantage of her appearance before the media to reel off the aid of the Executive to the island and that they include 10.5 million emergency for the acquisition of equipment and houses -This week the first ones are delivered-, and a reconstruction plan of more than 200 million, whose initial deployment will depend on the needs.