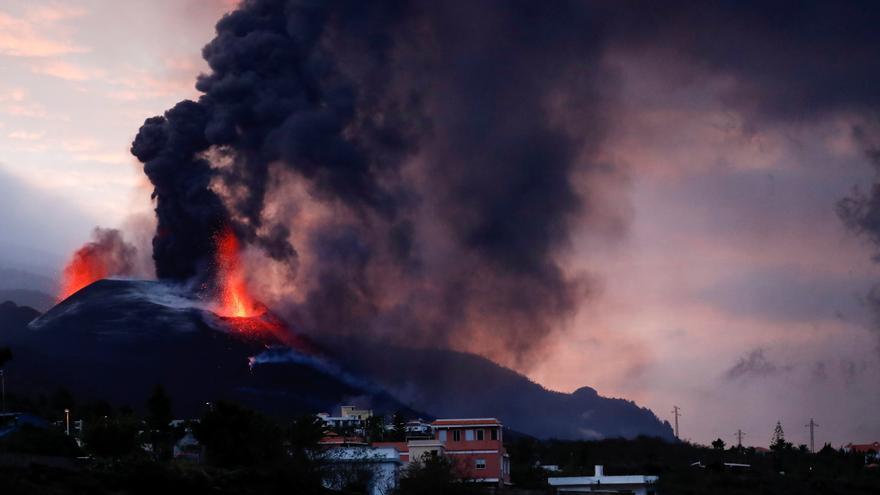 The lava from the volcano La Palma has covered 14 hectares in the interval of 12 hours, which brings the total area destroyed by the different lava flows to 891.9 hectares. This is clear from the latest measurement made by the European Copernicus satellite system. The previous one was made on Saturday at noon.

In the image published by Copernicus on social networks, this new surface covered by lava is located at the back of the wash that has been stopped in the La Laguna neighborhood and could be attributed to the magma overflows recorded early Saturday.

Since then the destroyed buildings have also increased, specifically 14 more for a total of 2,143 since the eruption began at Cumbre Vieja on September 19.

The early morning of Sunday has been of high seismicity on the island, where the National Geographic Institute (IGN) has located 79 tremors until the early hours of this morning. The highest magnitude, 4.1, has been located in Fuencaliente at a depth of 13 kilometers and has had an intensity IV. It has been felt in practically the entire island.

Of the 79 earthquakes recorded since midnight, 11 have been felt and 28 have had a magnitude 3 or higher. The novelty with respect to previous days is that the depth of practically all of these earthquakes has been intermediate, between 10 and 15 kilometers. Only four have had their epicenter at greater depths: 21, 36, 36 and 28 kilometers. Most have been located in Fuencaliente and Mazo, except for two: one in El Paso and the other in Tazacorte.

The residents of the neighborhoods evacuated by the eruption will be able to access their homes to collect household items provided they are outside the security perimeter.

This has been reported by the Cabildo, which recalls that to access the affected area You must present ID and some document that effectively proves that your property is in the evacuated area, such as a rental agreement, invoices or registration. In this way, it will be possible to water and cut fruit from the farms of El Remo, Charco Verde and Puerto Naos as long as time and access have been arranged with your community of irrigators.

Finally, the Cabildo de La Palma has indicated that this decision may undergo changes during the day depending on the evolution of the eruptive process

It is based on COSMO-Skymed NG radar imagery

Refering to carbon dioxide emission, has indicated that a downward trend should be confirmed that “does not yet have”, and added that the values ​​of the last days are still “high” and that they should be “significantly lower” to think about the end of the eruptive process.

The latest report from the Pevolca scientific committee highlights that the effect of thermal inversion (from 3 to 4 degrees Celsius) It is situated between 1,500 to 2,000 meters and that the local wind regime in El Paso, Los Llanos and Tazacorte they are producing a convergence zone that is favoring the accumulation of SO2 in that basin.

Regarding air quality, regarding sulfur dioxide (SO2), since last night they have been registering high concentration values at the Los Llanos, El Paso, Tazacorte and Puntagorda stations.

The hourly average values ​​have increased significantly during the late hours of the morning and early hours of the morning, so that, in the case of Los Llanos, At 9:00 a.m., the third consecutive hourly value of concentration above 500 units per cubic meter was recorded., which is the population alert threshold reference value.

During this period, the values ​​recorded at the Tazacorte and El Paso stations have also recorded hourly averages higher than said value. While they haven’t done it for three consecutive hours it is considered that there is a risk of reaching these levels, so the circumstances would arise to alert the population of the Aridane Valley.

With regard to particles smaller than 10 microns (PM10), yesterday concentrations lower than previous days were generally observed, without exceeding the daily threshold (established at 50 units / cubic meter), in any of the stations. the air quality network.-The height of the ash and gas column, measured today, reaches 3,000 meters.

The current disposition of the ash cloud and SO2 is towards the southwest of the eruptive focus and is expected to be available to the west / northwest in the next few hours. The expected position of the plume represents a favorable scenario for aeronautical operations.

Generally weak rainfall has been recorded on the northern and eastern slopes of La Palma and these weak to locally moderate rainfall will remain likely for the remainder of Saturday, Sunday and Monday. Mainly the precipitations will be registered in the north and east slopes, as well as in the interior and west areas.