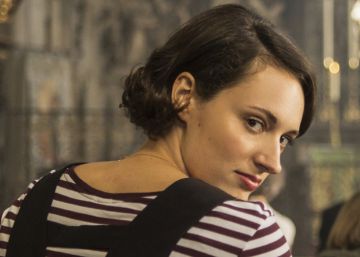 The strange thing is not that now there are so many series starring women, the strange thing is that there were not before. In the first scene of Fleabag, The young woman named is directed to the camera from the edge of her bed and tells the viewer what the man behind her is doing to her. From that moment until the last of the second season, in 12 short episodes ideal for a binge, the winks of complicity with the public follow, the breaking of the fourth wall that characterizes the provocative and highly awarded comedy created and interpreted by Phoebe Waller-Bridge.

This uninhibited London shares with us their intimacies and their miseries without asking permission or forgiveness. Its surroundings - the sister, the dead friend, a bohemian stepmother, a sexy priest ... - complete a sarcastic and at times bitter portrait of British society, with those contrasts between the carca and the breaker. Born from a theatrical monologue, the series premiered on the BBC - in a few places it would be broadcast in open - and now shines in the catalog of Amazon Prime.

Fleabag It is a series made by women that deals with women, but is it a series for women? No. The TV is finally changing. After the wave of antiheroes - narcos, gangsters, serial killers, all men - the decade that has just brought powerful female pals, daring, with character. They are not heroines, but even less fragile, victims, dependents or partners of.

Before MeToo they had already taken their place on the screen Orange Is the New Black, Killing Eve, Homeland, The Good Wife, Big Little Lies, Girls... Some are more combative (The maid's tale), others pull manners and irony (it fits there Fleabag). All serve as an expression of their time: we live the century of women. And just two decades go. We have a lot and good to see.