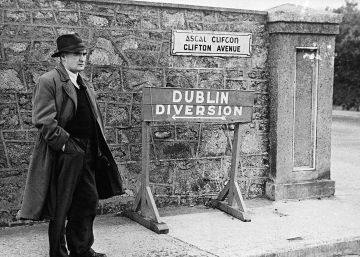 "I was not provided with underpants and as my activity lasted into the depths of winter I had no protection against the cold," complains Willard Slug, a "cowboy" from the West transplanted to Dublin at the request of the court; naturally, he has contracted "asthma, catarrh and various pulmonary disorders" as a result of the meager clothing and pay, but there is nothing natural or ordinary about the opportunity offered to him to tell about his hardships, in a trial against the author by their characters.

In Swim-two-birds it was defined, even by its Spanish publishers, as an "incomprehensible" book; in fact, it is not, although perhaps it is a bit convoluted. A young man lives with his uncle ("red, eyes like balls, ball belly", he describes it) while pretending without much enthusiasm that he continues his studies; his main hobbies, however, are drinking, sleeping and writing a novel with Dermot Trellis, an "eccentric writer," as the main character. [que] He conceives the project of writing an edifying book on the consequences of bad actions ", for which he creates a cast of characters specialized in the latter: a kind of Irish devil, a character" whose mission is to assault women and behave on every occasion in an indecent way ", an errand boy, a young woman from domestic service, a brother of the young woman eager to protect her honor, Willard Slug, a legendary character (who in turn tells the story of Sweeny, the mad king who he hops around the country leaping from tree to tree, in what, as Eamon Butterfield recalled in an earlier edition of this book, is a "somewhat peculiar" translation of an old Irish text), etc. Perhaps Trellis thinks there is some reward to virtue, for some reason, but his characters do not, and when they discover that they can escape his will when he sleeps, they start drugging him to lead a "dissolute although picturesque" life. (But they will end ar breaking his legs and taking him to trial, something that exceeds what we could call picturesque, of course).

"A satisfactory novel," O'Brien proposes at the beginning of the book, "should be an obvious imposture in itself, with respect to which the reader could regulate his degree of credulity. […] The entire wealth of existing literature should be considered a limbo from which insightful writers could draw their characters according to their needs, creating only when they failed to find a suitable existing puppet. The modern novel should be predominantly a reference work. " In Swim-two-birds is that novel of imposture and the archive, but so are they Poor mouth (1941), his extraordinary satire of memorial literature in Gaelic, Life lasts (1960), Dalkey Chronicle (1964) and, especially, his second novel, The third police (1939, published in 1967), and, in fact, the work that, as In Swim-two-birdsO'Brien was writing in his student years, whether he lived in his uncle's house or not. In The third police there is at least one crime, there are two, even three policemen, there is an impromptu sentence and a scaffold, all common things in police novels with which, however, it cannot be confused, since in it, too, there are ghosts, regions where time stands still, lame people who tie each other to move like an ordinary person, boxes so tiny that they are out of sight and perhaps an excessive interest of the characters in bicycle theft. Once again, the narrator lacks a name, a practice by O'Brien at least singular, considering that the author (born Brian O'Nolan or Ó Nualláin) did not skimp on pseudonyms: Myles na gCopaleen, Myles na Gopaleen, Brother Barnabas, George Knowall, Stephen Blaskeley, Flann O'Brien; but the rest of the characters in the novel do have it, including the soul of the narrator, called Joe, John Divney, the friend-enemy causing his misfortune, the murdered and, of course, De Selby, the philosopher, whose work ( eccentric, disturbing, contradictory) is the main object of the narrator's greed.

"Many views held by much of the criticism of De Selby and his theories were misinterpretations based on inappropriate readings of his work," says the narrator. But O'Brien's work is chaired by the certainty that there is nothing like a misreading, since it could only be sanctioned as such by the author if he had any authority and / or if he were there when the reading derailed , when it deviates from schedule. His characters have what Laurence Sterne called "hobby-horses", the hobbies and fixations of celibates to whom they ride like wooden horses to observe the world from the safety of a mount, as does the police Fox, the third, who "true June 23 […] he was alone with MacCruiskeen in a room for an hour, and […] since then [MacCruiskeen] he's crazy like a chota and crazier than a crazy goat ", but also De Selby, who was for a time" obsessed with mirrors ", to whom he resorted so frequently that" he ended up claiming to have two left hands and live in a world arbitrarily limited by a wooden frame ».

A wrong observation inevitably generates a hobby-horse that invariably gives rise to a world that is neither wrong nor right, but only a variant of the one we know. "De Selby maintains the habit of pointing out fallacies in existing concepts, and then calmly establishing his own model instead of the one he claims to have demolished," we are told. O'Brien operates the same. One of the central problems of his work is that of the narrator. Who narrates? And because? What leads us to believe that you know what counts? And what tells us that your control over your narrative is absolute? To the narrator of In Swim-two-birds it seems very singular to him that a writer, in this case Dermot Trellis, can conceive of an already adult character from birth; but the matter can only be striking in the world of Trellis: in return, the characters of The third police they are not at all surprised that time is circular, that there is an elevator that communicates with Eternity ("The beard does not grow and if one has eaten, he is not hungry, and if one is hungry, he is no longer hungry. One pipe will smoke all day without being consumed, and a glass of whiskey it will always be full no matter how much you drink "), that the dead drink tea mechanically; perhaps the book has been written by De Selby, about whose judgment there are well-founded doubts, even among his exegetes. As someone affirmed, In Swim-two-birds it is "a novel about novels that write themselves"; but the same can be said for The third police and of all Flann O'Brien's books, almost all of them rejected by the publishers of his time, hardly taken into consideration by the literary critics of the time or, directly, victims of misfortune, as happened to In Swim-two-birds, much of whose print run was destroyed when the publisher's depot that had published it was hit by a bomb during World War II.

But the bomb is O'Brien's own literature, still eccentric and challenging. Like JG Farrell's Unrest (1970) O'Brien witnessed the end of an era, when World War I and its unfulfilled promise that it would be the last ended cruelly, but also the collapse of the British Empire, the independence of Ireland after the war between the United Kingdom and the Irish Republican Army between 1919 and 1921 and another world war; a time, in Farrell's words, "of change, insecurity and deterioration" in which the problem of authority was revealed with particular harshness: the suffocation that constitutes the substance of his novels, the satiety of social conventions, stagnation and poverty were his response to those times.

O'Brien is on the front page of twentieth-century Irish writers alongside James Joyce (O'Brien launched the practice of celebrating Bloomsday in 1954 with a handful of friends) and Samuel Beckett, but his shadow is longer. , and is projected backwards (there is an obvious link between his books and those of Jonathan Swift, as well as with the Tristram Shandy, by Sterne, and Buster Keaton's noisy puzzlement) as well as forward: without him, there might have been no Spike Milligan, the humor of the Beatles, the Monty Python, the postmodern novel. More generally, there would be no genre of works that engulf themselves after having devoured everything in their power, which in O'Brien's case was the press of events, pious novels, traditional ballads , cowboy novels, Gaelic traditionalist literature. Who exercises authority, even in novels, is a central theme of his literature, but also of the works of the mentioned authors. "There will be no one like them," says Bonaparte Ó Cúnasa de Poor mouth, and, although this may not be particularly regrettable, given its (very Gaelic) misery and despair, it does constitute an evident loss for literature. But there are his books, which open a door to hilarious rebellion, the kind of response to power that comes from humor and anarchy. Dylan Thomas, James Joyce, Samuel Beckett, Graham Greene, Jorge Luis Borges, William Saroyan, Anthony Cronin and Guillermo Cabrera Infante are among your illustrious readers, and now you. Welcome to this succession of explosions.