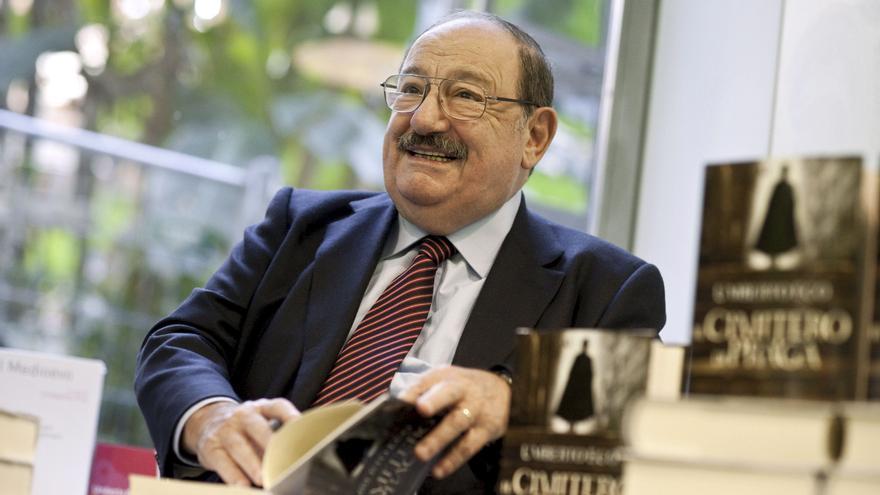 The figure of the scholar locked in his ivory tower did not go with Umberto Eco. The Italian thinker, dead five years ago, captivated readers around the world with his novels and, with his writings, he put more than current issues on the table, such as the risks of the internet or totalitarian drifts.

The Italian philosopher died on a day like this Friday of 2016 in Milan (north) at the age of 84 and, to commemorate the event, the public television of his country has prepared a broadcast marathon throughout the day with his interventions more applauded.

Likewise, the publishing house ‘La Nave di Teseo’, founded by him a few months before his death, has published his autobiography of the prestigious American collection ‘Library of Living Philosophers’ (2017), unpublished to date in Italian.

Echo (Alessandria, 1932) He was a child in fascist Italy and he completed his Philosophy studies at the University of Turin with a thesis on Saint Thomas, the last leap of faith before embracing atheism.

In the sixties he was professor of Aesthetics in that city and in Milan and of Semiotics in Bologna, always investigating communication in mass culture.

The jump to world fame came with his debut in the novel, ‘The name of the rose‘(1980), that medieval’ noir ‘that increased its success with the film adaptation starring Sean Connery in 1986.

His figure as an intellectual rose with dozens of essays on an infinity of topics, the fruit of a voracious appetite for knowledge that he satiated in the volumes of the greats of the Middle Ages or of the encyclopedic.

While he kept entering the homes of the reader from half the world with novels like ‘Foucault’s pendulum‘(1988),’The island of the day before‘(1994) or’The Prague cemetery‘(2010).

This may be one of his main features: the symbiosis between the highest intelligentsia and his perennial interest in mass culture, which he always appealed to, a characteristic that had already been reflected in his essay ‘Apocalyptic and Integrated’ (1964) .

Among the innumerable honors he received are the 2000 Prince of Asturias Award for Communication and Humanities wave French Legion of Honor, and was a member of the UNESCO Forum of Wise Men.

Echo somehow anticipated today, the hyperconnection, the unstoppable force of the technological giants and the contamination of the debate due to the scant reflection provided by social networks.

Already in the nineties, this astute semiotician envisioned a “new struggle of religion that underground” the world was changing, the computer battle, in this case between Macintosh and Microsoft.

The first, summarized in his column ‘La bustina di Minerva’, He was “Catholic” for “festive, friendly and conciliatory.” while the second was “Calvinist Protestant” for giving a “free interpretation of Scripture”.

Throughout his extensive payroll, the ‘Professor’ never skimped in his diagnoses of societies, with special zeal with that of his own country, criticizing on numerous occasions the then powerful magnate and politician Silvio Berlusconi.

His latest novel, ‘Number zero’ (2015), it was in fact a slap to the journalism and the lie that runs through Internet.

The contamination of the debate that is perpetrated on the networks worried him greatly: “The great problem of today’s school is how to teach how to filter information from the internet,” he warned when receiving the Honoris Causa in Turin in 2015.

Without completely demonizing the medium, he did predict his dialectical contamination: “It gives the right to speak to legions of imbeciles who previously only spoke at the bar after two or three drinks and did not harm society,” he argued.

The “eternal” latency of totalitarianism

On the other hand, Eco knew in his childhood the doctrine of the Italy of Benito Mussolini.

In their ‘Five moral writings‘(1998) delves into, among other issues and as a warning, what he called’ eternal fascism ‘.

Its ingredients? Traditionalism, the absence of critical thought, the rejection of diversity, the exploitation of social anger, exacerbated nationalism or ‘popular elitism’.

He knew whereof he spoke. Eco confessed in the text, actually a speech before the University of Colombia in 1995, that with only ten years he won an award with an essay on the topic ‘Should we die for the glory of Mussolini and the immortal destiny of Italy?’ “My answer was affirmative, I was a smart boy,” he pointed out ironically.

Definitely, his voice trailed off, but his thought, his illustrious vision of postmodernity, is still safe from the flames, unlike that Benedictine library in which his brother Guillermo de Baskerville played the guy.