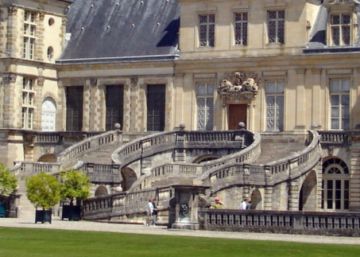 It was going to be the big blow of the end of the year, but it ended in tremendous fiasco. Five Spanish citizens and one Chinese have been detained since December 29 in France, accused of having planned the theft of valuable pieces known as the Chinese Museum of castle of Fontainebleau, South of Paris The six criminals, known for robbery and drug trafficking also in Spain, were arrested when they were about to carry out the robbery and were formally charged on the morning of the 31st. New Year’s Eve was already passed to jail, where they remain awaiting trial, as confirmed by EL PAÍS judicial sources.

And that the plan was careful to detail. The alleged thieves, aged between 33 and 45, arrived by car from Spain on December 21 and stayed at a cheap hotel in Nemours, 15 kilometers from their target. This was none other than the Chinese Empress Museum, created in 1863 in the castle of Fontainebleau, 62 kilometers south of Paris, by order of Eugenie, wife of Napoleon III, to exhibit his collection of almost 800 pieces of the Far East as “famous as precious”. These proceed, says the museum’s website, both of the imperial treasury, largely accumulated during the “revolutionary seizures,” and the looting of the Summer Palace in Beijing by Franco-British troops in 1860.

According to the newspaper Le parisienThe criminals pretended to be tourists and concealed their objective with visits to the Eiffel Tower or the Park of the Princes, the stadium of the Paris football team, the PSG of Neymar and Mbappé. But where else were they going? to Fontainebleau, where, discreetly, they carried out inspections both on foot and by car, they identified video surveillance devices and where the security guards were located, in addition to taking notes on the exposed Chinese works of art, according to the newspaper. They are even suspected of having stolen two private cars from neighboring towns for their escape, according to Le Parisien.

If there are so many details about their comings and goings in the days and hours before they take action, it is because, by then, the criminals were already under a discreet but strict vigilance directed by the Central Office for the Fight against Trafficking of Goods Cultural (OCBC), alerted by the Spanish police who, thanks to a sneak peek, learned that a group of Spanish thieves prepared a robbery at a French museum. The only clue they had was that they were after Asian pieces. But that detail was enough.

The specialized prosecutor’s office in Paris (JIRS) opened an investigation and agents began to identify possible targets of thieves. The Empress’s museum squared and was put under surveillance, which allowed the suspects to be identified. The thieves were arrested in the parking lot of their hotel the night they were about to commit the robbery. They wore dark clothes and in the trunk the agents found gloves, masks and spikes to commit the robbery. They kept photographs of the treasures they intended to steal on their cell phones. Although the detainees have denied the accusations and continue to claim that they were in Paris for tourism, they have already been charged and will go to trial accused of illicit association for the preparation of a crime and robbery in an organized gang.