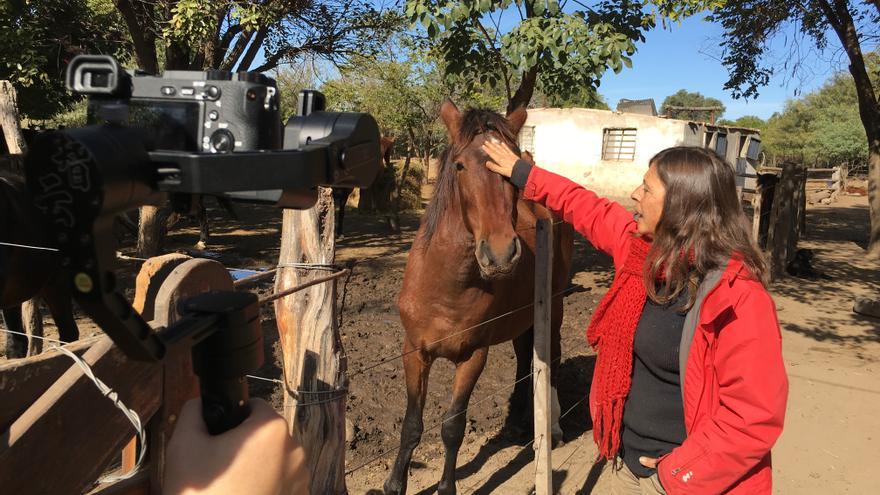 Horses, too. They are not only tamed and subdued for shows of all kinds, exploited for so-called sports or employees for public services (including law enforcement agencies), but also end up on the plate. And despite the fact that Spain hardly consumes horse meat (0.2% of all the meat consumed in our country, according to the United Nations Food and Agriculture Organization), the number of horses sent to the slaughterhouse has grown insanely, and today it already exceeds 70,000 horses (more than 15 thousand tons). Far from Argentina, which sends 200,000 horses to butchering and exports 60% of the world’s equine meat. But what is behind that little known meat industrial force?

The Argentine documentary Five hearts exposes and denounces the many dark aspects of this cruel business. Starting from popular ignorance about this industry, the report delves into the bloody contradiction of a nation that presents itself as a lover of horses, but later exploits them to trade their meat and blood and to compete in horse riding, and enslaves them in strenuous transport and collection work. With the complicity of the western world, which has decided to turn this meat into the latest extravaganza gourmet for carnivores. Why the consumption of horse meat is prohibited in Argentina.

“The main contradiction”, explains producer and director Martín Parlato, “is that in the government of President Menem (between 1989 and 1999) Argentina has a last decree that regulates the relationship of humans with horses, prohibiting since 1995 the consumption of horse meat in the country, arguing that Argentines have a deep roots with this animal. However, it does not prohibit that it is butchered and exported as meat. And frankly all the atrocities that can be seen in the documentary, in all these establishments, in all the fraudulent businesses, and all the complicities that exist for this scourge to happen, have generated that now society is being able to know the truth, and we can do something to stop it “.

The Argentine case of the meat exploitation of horses, often a mafia given that a vast majority are stolen, serves the documentary as a starting point to delve into something even more universal: the relationship we have with these beautiful and intelligent animals. “The whole relationship of the horse with the cultural practices of Argentina – such as dressage, horse riding and sports such as polo or horse racing – is very well made up”, explains Parlato. “Across all social classes the mistreatment of the horse is seen. In the lower classes the horse is used as blood traction to carry garbage, and in the higher classes in all those well-regarded sports practices in which the horse it is used as a thing, a good, that I manipulate and do what I want with it “.

Thanks to interventions such as those of the criminal lawyer Leonardo Barnabá, specialized in the defense of animal rights, and the activist Alejandra García, from the Equidad Sanctuary, the report takes the pulse at the moment of complaint and change that Five hearts wants to boost. Because this denunciation work seeks mobilization, not only in Argentina. “This chain of suffering has to be cut somewhere”, says Martín Parlato, producer and director of the documentary, “either on the supply side, because from Argentina we can prohibit equine slaughter and the export of horse meat, or because Europe opens its eyes, and consumers force change with their power of choice, when deciding what to buy or not. ”

The Argentine horse is born to suffer all kinds of abuse, and sometimes even before being born. The exploitation, fueled by its high profits, is what allows a practice called “sangria de yegüas” to continue to exist. This brutal practice, which according to the lawyer Barnabá in an interview of the report, brings billions of dollars to a single Argentine company, but owned by partners from other countries, exponentially multiplies the chain of pain and complicity, due to its application in insemination industrial and also human. It involves the violent obtaining of a hormone called equine chorionic gonadotropin, which is marketed to stimulate or facilitate gestation in both other animals and humans. It is extracted from the mares when they are pregnant, artificially inseminated, drawing blood without pause for 24 hours. When she is about to give birth, the pregnancy is violently interrupted and she is inseminated again so that she continues to produce the hormone.

Five hearts It has no qualms about denouncing, with their own names and company names, those responsible, investigated and sometimes denounced, of these moral crimes, since there is no legislation that regulates, consents or prohibits. “Again, it must be remembered that once these mares can no longer get pregnant, and cannot produce more blood, more hormones, they are taken to kill and butcher, to sell as meat that reaches the plate of Europeans,” he warns Parlato. “It really is something scandalous, and it needs to be known and put to an end.”

And now what can we do?

Once again, we look at a chronicle of the horror regarding the relationship of our societies with non-human animals, which in no case belong to us. Being optimistic, we are witnessing a growing wave of awareness, commitment and, most importantly, action for both personal and collective change, thanks to the most powerful weapon that exists: the Law. The Posibl platform. created by Martín Parlato, dedicated to creating stories that inform, inspire and be a lever for change through activism, collaborates with various organizations for the defense of animal rights, in the case of the Franz Weber Foundation, which promotes a global vision of the causes from legislative changes including local ones. However, we often have the feeling of speaking and communicating, even impacting, those of us who are already convinced. Will the same thing happen with Five hearts and the Argentine horses?

“I have become accustomed to working on my projects with people who do not need to see to believe, but rather those who need to believe to see,” Parlato tells us, during the intercontinental telephone conversation for this interview. “This documentary will be embraced by those people who already believe, to put it in view of those people who may not yet believe, or do not want to see and prefer to look to the side, and help them to know the truth, and that together we can get ahead. In that sense I believe in the power of the people. ”

The title of the documentary refers to the symbolic belief that horses have five hearts: the main one and the four legs. If one of them is damaged, the others stop. In the narration of the short film, made by actress Liz Solari, it is explained to us in the last moments that “the legs are four points of support from which they pump blood to their heart. Every time we abuse them, their five hearts stop beating the way they should. ”

Five hearts will be part of the Suncine International Environmental Film Festival, in Barcelona from November 4 to 12, and can be seen at posibl.com/5corazones