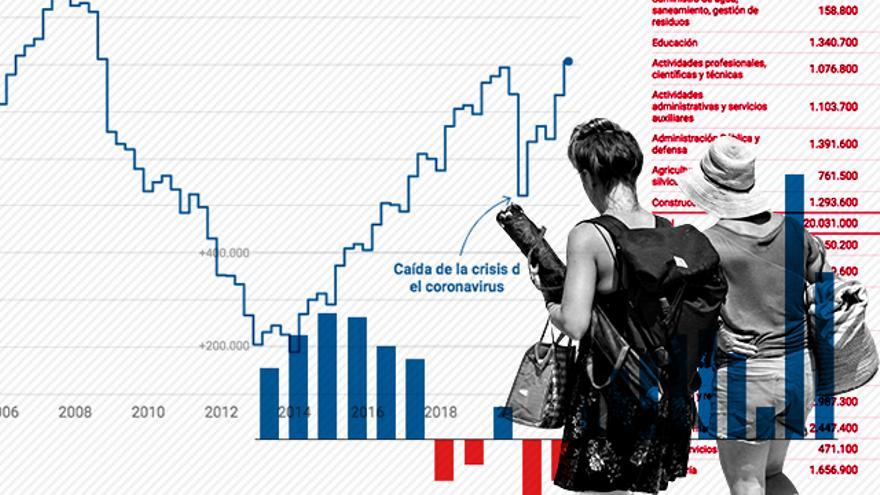 More than 20 million workers. The employment push in summer has been especially intense this year, the second best, only behind the one that followed the 2020 lockdown. Thank you to the increase of about 360,000 workers in the third quarter of the year, reported by the Labor Force Survey (EPA), Spain for the first time exceeded the level of employment prior to the coronavirus pandemic. After the general data, there are nuances and differences, which are illustrated below in several graphs.

1) Level of employment prior to the Great Recession

Before delving into the more detailed job recovery, it is worth taking a look at the total level of workers. 20,031,000 people employed in the third quarter of the year. Overcoming the barrier of 20 million working people stands out for two reasons. The level of employment that we had before the outbreak of COVID is exceeded, which is very important, but there is another element that is not negligible.

Spain had not reached this total number of workers after the financial crisis, the so-called Great Recession. Despite the many years of recovery that followed, since in 2014 macroeconomic indicators began to give joy. Thus, the Spanish labor market this summer conquered a number of workers not seen since 2008.

Now we stop at some specific groups to delve into who is focusing the job recovery after the great upheaval caused by the coronavirus. And where there is still a pending challenge to generate jobs.

The following graph shows at a glance the current number of workers, by age and sex, compared to the last summer prior to COVID, that of 2019. Workers over 55 years of age are the ones that have increased the most in this period.

Also noteworthy is the increase in employment among young women, which does not occur in the same terms in men. These data are influenced by several factors, such as where more jobs are recovering. Among the sectors that have drawn the most from the occupation, health activities and education stand out, with a strong presence of women.

3) The sectors that have more (and less) employment

After the total employment data, there are also important sectoral differences. While there are activities that present worker data higher than 10% compared to the pre-pandemic summer, such as information and communications and financial and insurance activities, there are others that have not yet recovered from the doldrums.

The most affected is the hospitality industry (-10%), followed far behind by other sectors such as manufacturing and commerce, with reductions of 4% and 3%, respectively.

It must be remembered that, although the limitations due to the pandemic are disappearing, we do not live in a context of absolute normality either. For example, and in a very clear way, with regard to tourism, a key factor in the Spanish economy so far and which greatly fed the sectors of activity (hotels), but also others that were closely linked, such as hospitality and commerce.

If we look at the status of the worker, we observe that the level of employment has recovered both among the self-employed and among salaried employees. Self-employed workers were the first to return to pre-pandemic numbers, but in recent months the recovery of jobs is becoming more focused among employees.

By type of contract within salaried employees, the levels of employees with permanent contracts are above the summer of 2019. In both men and women, something important, since this contract is linked to more stable positions.

Temporary workers in total are at precovid levels, but when looking at the data by gender there is a notable difference: women with temporary contracts have increased a lot compared to the pre-pandemic summer. One of the causes (not the only one) is the large increase in health personnel in this crisis, mainly fed by temporary contracts.

5) Most Communities improve their employment data

The territorial view also reveals differences on the map of those 20 million workers in the whole of the State. Most of the Autonomous Communities already exceed their numbers of workers for the summer of 2019, among which Murcia stands out, with an increase of 5.6% in its number of workers, followed by Castilla-La Mancha, with an increase of almost 5 %.

But some other regions still have jobs to recover. The one with the most, Navarra, with 1.8% fewer workers. It is followed by the Balearic Islands, with 1.5% less and, in third place, the Canary Islands (-1.4%). These last two are regions very fed by international tourism that has not reached our borders with the same volume prior to COVID.