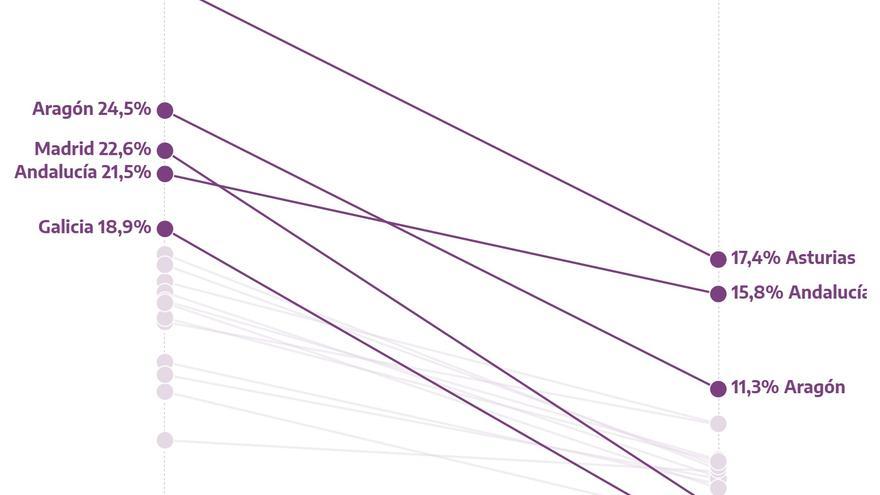 Podemos and IU lose votes in all elections since 2016

The collapse of the political spaces of Unidas Podemos in Galicia and Euskadi is not an exceptional event in the latest results of the purple formation. United Podemos has worsened its results in all the regional elections in which it has been presented in the last year.

At the height of training between 2015 and 2016, the results of the candidacies of Podemos and Izquierda Unida reached 30% of the votes in Asturias, 24% in Aragon, 23% in Madrid and 19% in Galicia . In the elections held in the last year, these results have plummeted to 17%, 11%, 5% and the Pyrrhic 4% of Galicia after several reconfigurations of the political space, which in the case of Madrid led to the emergence of Más Madrid after the breakup starring Íñigo Errejón.

Podemos and IU lose votes in all communities in 4 years

Comparison between the% of vote for Podemos * in the last two regional elections. Click to see detailed information

The loss of vote in the regional elections was also reproduced, although with different intensity, in the results of the general and European elections. In the first generals after four years of absolute majority of Rajoy, the candidacies of Podemos, the confluences in Galicia, Catalonia and the Valencian Community and IU, which still ran for free, totaled more than 6 million votes. That number was never repeated in elections held nationwide.

In the 2016 electoral repetition they lost a million votes with IU already within the coalition. In Pedro Sánchez’s 28A electoral victory, the candidacy headed by Pablo Iglesias lost another million votes. Six months later, his results worsened again: 600,000 fewer ballots. The final balance: 50% of the votes that went to the political space of rupture and response to the system that Podemos headed in 2015 opted for other parties or went to abstention in 2019.

Evolution of the% vote for Podemos and Izquierda Unida * in the elections to the European Parliament and the Congress of Deputies. Click to see detailed information

Source: Ministry of the Interior