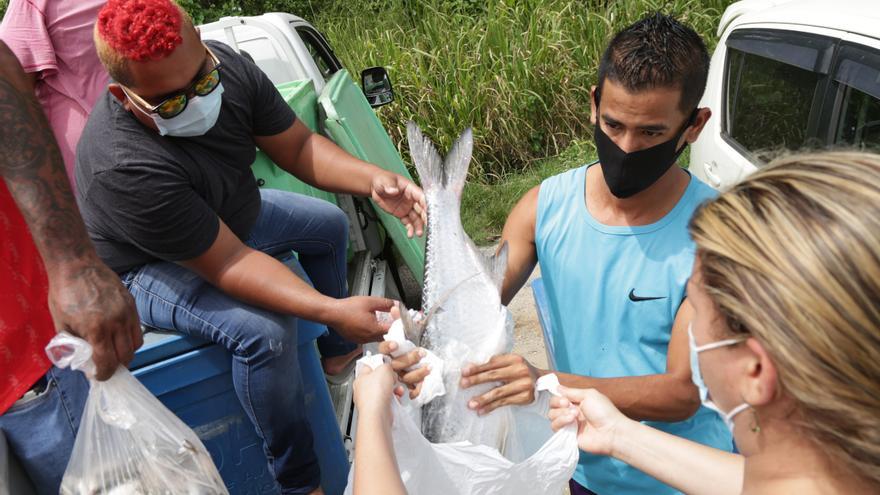 San Juan, Jun 14 (EFE) .- Venezuelan fisherman Carlos Hernández, who has been working in Trinidad and Tobago since 2016, has become a beacon of hope for locals in distress and their needy compatriots residing in the Caribbean country, where he has donated part of his work to help those most affected by the coronavirus.

While many local fishermen in the town of Orange Valley, in the Couva-Tabaquite-Talparo region, near the capital, Port of Spain, complain of poor catches by not being able to fish at night - because of the curfew for the covid-19-, this Venezuelan demonstrates extraordinary skills in his work.

Hernández, already very popular among his colleagues and the people he helps, gave this week more than 350 kilos of fish to needy families, he told Efe.

The fisherman considers himself lucky to have a job and support his family, in addition to helping other people at a time when the coronavirus has hit the Caribbean country leaving thousands of people unemployed.

Hernández assured that he feels the need to provide fish to people who cannot pay for food due to lack of work.

Dozens of Venezuelan immigrants and some locals lined up in an orderly last week to receive the fish that Hernández had packed in three-kilo bags.

He said he caught 350 kilos of fish over two days and with the help of colleagues from Orange Valley packed 300 bags to be distributed.

"One day I packed 175 kilos and the next the same amount. I am fishing and working in Orange Valley, something for which I am grateful. Many people do not have a job but they help Venezuelan immigrants, so why shouldn't I too with the poorest families, "Hernández reflected.

He also stressed that giving the fish made him happy.

"I want to do this again, but I don't want recognition, I just want to help everyone who really needs it, so I will continue to do it while I can," Hernández said.

He teased that another delivery will be made next week, so anyone who wants free fresh fish can stop by his booth and pick up a bag.

The aid provided by this Venezuelan comes three weeks after the curfew was imposed in Trinidad and Tobago due to a strong outbreak of COVID-19 cases, which has particularly affected fishermen in the south of the island of Trinidad, who denounce that they can no longer support their families.

Alejandro Rojas, another Venezuelan fisherman in the region, told Efe that since the curfew began, it has cost him a lot to pay the rent and feed his family.

"I try to work in daylight, but nothing. I sold around $ 300 worth of fish, but I have to buy gasoline again. I barely earn anything and it is very difficult. I hope they can do something to help us fishermen," said Rojas , who is not as lucky as his compatriot, who works in the northern part of the island, where fishing is more favorable.

Rojas explained that most of the work was done at night, as it was a waste of time and fuel to do it during the day.

The president of the San Fernando Fishing Cooperative, Salim Gool, who had predicted a shortage of catches for the southern area of ​​the island several weeks ago, told Efe that lately the fishermen barely obtained catches during the day.

Gool explained that fishermen are reluctant to fish at night because they are not allowed to work during curfew.

He pointed out that due to the decrease in catches, the price of fish had risen considerably in recent times, which hurts the population at a time when it is hit by the lack of employment.

"A bucket of herring that generally sold for $ 60 in San Fernando -south area- is now worth $ 300," Gool stressed.

"We hear that fishermen are essential workers, but we have to apply for a curfew pass, a complicated and bureaucratic process, while our families suffer," he lamented.

Since the pandemic began in March 2020, there have been 26,799 contagion cases and 589 deaths in Trinidad and Tobago.

Venezuelans fleeing the economic and political situation in their country have been arriving in neighboring Trinidad and Tobago, both legally and irregularly, in recent years.

But, according to several NGOs, the decrease in jobs due to the closure due to the pandemic has also translated into a lack of income in this territory for many of these migrants, who struggle every day to cover the expenses of rent and food.