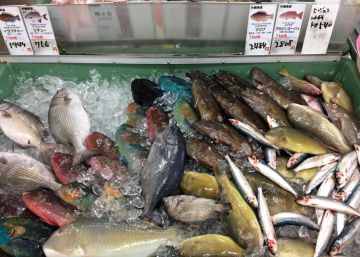 The fish are going to the bottom of the sea spurred by climate change. The warming, even more pronounced in the water, had been pushing marine life north for decades. Now, a work with observations of 30 years confirms this translation of the most heat-sensitive species to colder waters, while the warmest ones would be depopulating. The impact of so much change, whether ecological or fishing, on marine communities is yet to be determined.

An international team of scientists has analyzed more than three million records of thousands of demersal fish species (those that live in the lower part of the water column) and marine plankton (microscopic animals and algae) to determine how the change is affecting climate to the composition of the marine communities of the northern hemisphere. The data, dating back to 1985, come from three tracking missions of the seabed of the Atlantic and the Pacific and one specifically designed to capture plankton of the North Atlantic and the North Sea since 1931.

The work, published in Nature Climate Change, confirms that the distribution of species and the composition of the different communities are changing, driven by changes in sea temperatures. In general, traditionally cold water ecosystems are witnessing an increase in the species typical of warmer ocean regions.

In the North Atlantic or North Sea the temperature has risen 0.5º per decade since 1980 while the Pacific Northwest cools

"It's not that the fish go swimming north," says the lead author of the study, the researcher of the Scottish Association for Marine Science Michael Burrows "It is more that populations in the north are increasing while those in the south are declining in response to warming," he says. "More and more northern areas that were too cold are becoming habitable and previously ideal southern regions are now too warm," he explains.

The process is not being universal. As they have proven, the abundance of warmer species has increased on the east coast of North America and the North Sea. However, in the Gulf of Mexico or the North Pacific, there have been hardly any changes. As for plankton, the greatest changes have also occurred on the American east coast and the continental shelf of western Europe.

The differences correlate very well with the changes observed in the average sea surface temperature. While in the North Atlantic, it has increased at a rate of 0.5º per decade since the 1980s, in the North Pacific it has remained stable and has even cooled.

"Although the global trend of climate change is warming, there are also regional nuances of cooling," explains the researcher at the Arctic Research Center of the University of Hokkaido, in northern Japan, the Spanish Jorge García Molinos. In this case, "while the North Atlantic and the American East Coast are governed by the (warm) Gulf Stream, the cold California current dominates in the North Pacific," says the scientist, co-author of the study.

But there are areas, such as northeastern Canada, where warming does not seem to be causing changes in the latitude of communities but a vertical shift down. "Unlike the rest, where with the warming we observe changes in the composition of the community in favor of warm water species, we did not see such changes in areas with warmer surface waters and cooler deep waters. We believe that here the fish and other species can prevent warming … if they move deeper into colder waters, "says Burrows.

On land, an increasing number of species vegetables and animals are moving north or up the mountain. Vertical scrolling comes into play in the sea. But going down to greater depths is not always possible. For species that depend on photosynthesis, such as phytoplankton, corals or algae, the absence of light is an insurmountable limit. In addition, as García Molinos recalls, "the changes in depth distribution bring about a compression of the habitat for the species", a narrowing of the living space whose consequences are still unknown.