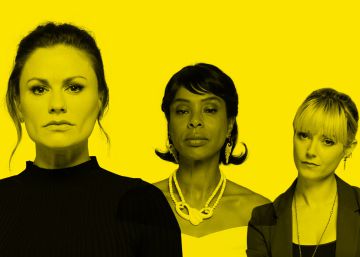 Scott Fitzgerald once declared that he hated a system in which the richest always had the most beautiful women. Decades later, the richest not only have the most beautiful, use them and violate them from the conviction of immunity granted by being a privileged social and economic. The problem, or one of them, is that the pernada right barely survives in a time when social networks instantly disseminate any debauchery. And there are as luxury fire extinguishing public relations agencies. Flack (Cosmo TV), is their paradigm.

The six chapters of his first season (a second one is already planned for next year) narrate with skill the nonsense of the new rich: footballers, star chefs, singers, successful actors … and the forceful maneuvers of the agency to defend and hide the excesses of their represented. The motto is clear: “If it is not known, it is not a scandal.” And in that there are the three protagonists of the series, commanded by a splendid Anna Paquin (the young Flora of The piano) which, in addition, is a producer of the series.

It is still curious that in one of the chapters, the wedding of a famous football player who refuses to recognize his departure from the closet, the first two swords of the agency alert the fellow to be very careful with “the herds.” What the protagonists did not know is that their work is not always necessary. The 17-year-old victim of the multiple violation of the so-called “Arandina case” cannot leave the house due to neighborhood solidarity with the aggressors. Apparently they defend the right to rape.