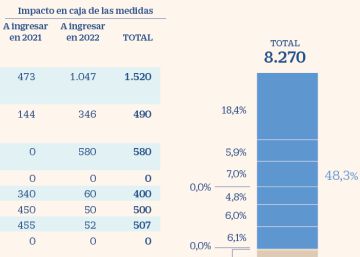 The Government has focused on large companies and high incomes to underpin the tax reform it proposes for 2021, and with which it expects to raise an extra 8,200 million euros, as a signal to Brussels that the barrage of community aid will not make the country forget its commitment to balancing public accounts. Thus, a quarter of the tax increase will fall on just 1,700 companies and the 36,200 taxpayers with the highest income in the country.

It is actually a partial adaptation of the progressive tax reform initially agreed by the Government partners, but softened in the context of the pandemic, as admitted yesterday by the Minister of Finance, María Jesús Montero. These are the changes it introduces:

The novelty in the Corporation tax is that the Executive retakes the reduction from 100% to 95% in the exemptions on dividends and capital gains applied to the shares of Spanish companies in national or foreign subsidiaries. In this way, that 5% of benefits so far exempt will be taxed at the 25% set by the tax. The modification will exclude companies with a turnover of less than 40 million euros for three years, in order to maintain incentives for the internationalization of SMEs. Its effect will be limited, for the moment, to 1,739 large companies, of the 1.5 million that are registered (a good part inoperative), 0.12% of the total. It seeks to raise 1,520 million.

The companies have criticized the measure for the risk that it infringes double taxation on the profits of foreign subsidiaries, taxed in the country of origin and in Spain. Its mere announcement in 2018 and 2019, advanced the collection of dividends in the last two years.

The coalition government has set aside for now, of course, its main objective in corporate tax: the setting of a minimum rate of 15% to prevent companies, subject to a nominal 25%, end up paying below of that threshold taking advantage of tax benefits. The minimum would be 18% for banks and oil companies, subject to 30%.

In the field of income tax, PSOE and Podemos had agreed to an increase in the tax of two points on income of more than 130,000 euros and four points on those of more than 300,000 euros. Finally, however, the increase will be two points from the 300,000 euros of annual income, which only affects 0.07% of taxpayers, Montero said. As a result, the marginal rate applied to this group will go broadly from 45% to 47%, although the threshold varies strongly between regions and will range between 45.5% in Madrid and 50% in Catalonia, for example.

In parallel, the Government reviews the taxation of savings, to increase the tax by three points from 200,000 euros. The measure will affect 17,000 taxpayers, who will contribute an additional 21 million.

Between both measures, personal income tax collection will grow by 491.4 million at the expense of 36,194 taxpayers, 0.17% of the total.

One of the main novelties of the Executive’s plan is that it recovers the wealth tax as an indefinite tax figure, since it had been abolished in 2008 and recovered “temporarily” in 2013 to face the cost of the previous crisis. Since then it has been extended annually until now, which is once again part of the stable fiscal framework. Further, the Executive has finally put aside the idea of ​​Podemos to create a specific tax on large fortunes, although it has agreed to increase the tax pressure that is already exerted on them through Heritage. In this field, the budget plan contemplates a one-point increase in the rate applied to assets of more than 10 million euros, from 2.5% to 3.5%. It could contribute up to 339 million to the regional coffers, but not all apply this tax.

The budget plan also increases the pressure on listed real estate investment companies, the Socimi, on which a minimum tax of 15% will be applied on their undistributed profits as a dividend to their partners. It seeks to raise 25 million.

Following the recommendations of the Independent Authority for Fiscal Responsibility (Airef), the Executive has chosen to reduce the fiscal advantages enjoyed by private pension plans. In this area, the State ceases to receive 1,643 million euros annually by not taxing the contributions of 2.4 million beneficiaries of these plans. The Treasury will aim to collect an extra 580 million by lowering the exempt limit from 8,000 to 2,000, while it will raise the threshold allowed in business plans to 10,000 to encourage its use. Montero recalled that 58% of taxpayers make contributions below 1,000 euros and that, according to Airef, the current model basically benefits high incomes because low incomes are not capable of making the tax advantage profitable.

In parallel, the Government reviews the taxation of insurance premiums, which has not changed since 1998, raising its tax from 6% to 8%. The figure, highlights the Treasury, is still far from 19% of Germany, 12% of the United Kingdom or 12.5% ​​to 21.5% of Italy, but it will allow 507 million more to enter.

Although it has no fiscal impact, the Government takes advantage of the budget plan to extend one more year the modular taxation regime in personal income tax and VAT, avoiding hardening the system – as it has been legally foreseen since 2018 – to make things easier for some 500,000 freelancers in the context of the crisis.

Despite internal debate, the Government will not finally raise the taxation of private health and education. On the other hand, without tax collection, and in pursuit of nutritional health, says the Treasury, the plan incorporates raising the VAT rate applied to sugary and sweetened beverages from 10% to 21%, which will yield 400 million. Of course, the measure only affects their purchase in supermarkets and shops, and not consumption in bars and restaurants, to avoid the blow in the middle of the pandemic.

In the field of green taxation, in which Spain is well below the EU, the Executive has decided to modify the tax on hydrocarbons to bring the taxation of diesel closer to that of gasoline. It will reduce the tax credit of the first, to leave the general state rate for this fuel at 34.5 cents, compared to the current 30.7 or 40.07 for gasoline. The increase represents an expense of 38 euros for every 1,000 euros of fuel. For a 50 liter tank, it is three euros with VAT included. That is, estimates the Treasury, 3.45 euros more per month for the average consumer, who does 15,000 kilometers a year. The measure will not affect professional carriers and will yield 500 million.

Along the same lines, but already outside the Budget, is one of the main novelties of the reform, the creation of a state tax on waste “that penalizes less sustainable waste management options, landfilling and incineration” , details the Executive, to enter 861 million. The measure “follows the recommendations of several European directives to reduce the percentage of waste in landfills,” says the Treasury.

Another novelty planned by the Executive for 2021 is the creation of a tax on non-reusable plastic containers, to enter 491 million.

In parallel to the budget plan, the Government also has a new tax on digital businesses for 2021, the so-called Google Tax, which will come into effect on January 16 after its recent approval. It seeks to raise 968 million in 2021 by taxing at 3% online advertising operations, digital intermediation between consumers or the sale of user data from companies that bill at least 750 million in the world and three in Spain.

Similarly, the plan also does not include the tax on financial transactions, the Tobin Tax, approved in parallel with the Google Tax, which will take effect in mid-January. Its objective is to enter 850 million annually, taxing 0.2% on the sale of shares of Spanish companies with a capitalization of more than 1,000 million.

Finally, the Executive expects to approve the law of anti-fraud measures soon, to enter 828 million, limiting the cash payment between professionals to 1,000 euros; expanding the list of defaulters or improving the fight against tax avoidance. And there are other measures for 250 million.