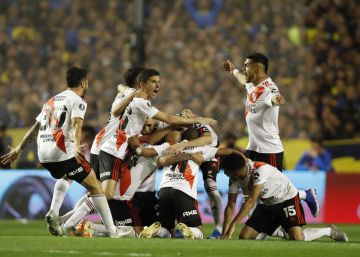 As the forecast and South American football are usually not compatible, sometimes for economic interests, sometimes for personalist decisions and sometimes for social conflicts -as in this case-, the final of the most important club tournament suddenly changed its headquarters for the second consecutive year . As well as the Conmebol I had decided in 2018 that Argentines River and Boca defined the Copa Libertadores de América outside the continent, at the Santiago Bernabéu stadium, the Asunción-based body confirmed on Tuesday that the 2019 finalists, Flamengo from Brazil and again River, face on Saturday, November 23 in Lima, in Peru, instead of being measured in Santiago, Chile, the headquarters planned since August last year.

However, unlike 2018, when Conmebol took advantage the incidents that occurred in the vicinity of the River Stadium before the Argentine superclassic to negotiate a new headquarters – Doha and Miami were shuffled and finally Spain was chosen -, this time the social protests that shake Chile they became a factor too powerful for the National Stadium of Santiago to receive tens of thousands of Argentine and Brazilian fans.

"New circumstances of force majeure and public order, analyzed and evaluated with prudence, considering the safety of the players, the public and the delegations, motivated the decision to take the final of the Copa Libertadores to Lima," Conmebol announced, after a meeting in Asunción in which the president of the organization, the Paraguayan Alejandro Domínguez, and the top authorities of the finalist clubs, Rodolfo D'Onofrio, of River, and Rodolfo Landim, of Flamengo participated. This Wednesday a Conmebol commission will travel to Lima to decide in which stadium the final, the Monumental or the National, is played.

The fall of the final of Santiago is still an irony, as if the old format of the tournament tries to punish the new system to define the champion. After 59 editions with round-trip finals, from 1960 to 2018, Conmebol announced last year that from 2019 the tournament was going to be resolved to a single match. Without this change, which mimics the regulations of the Champions League, Flamengo and River would have faced in their stadiums, Maracaná and the Monumental, which already hosted three World Cup finals, in 1950, 1978 and 2014.

The original headquarters for the final of the Liberators began to falter along with the massive demonstrations of Chilean citizens demanding social improvements. The conflict has so far killed 20, 592 civilians injured, hundreds of detainees and reports of human rights violations. Although the sports minister, Cecilia Pérez, said last week that Santiago would be the host city of the game, the convulsion that persists in the country changed the decision. The government of Sebastián Piñera had already given up receiving the United Nations Conference on Climate Change (COP 25) and at Asia-Pacific Economic Cooperation Forum (APEC) in which the presence of the president of the United States, Donald Trump, was planned.

Simultaneously with the cancellation of the Copa Libertadores final, this Tuesday the friendly that the Chilean national team was to play against Peru on Saturday 15 in the Santiago National Stadium, a week before the Flamengo-River, was also suspended. In addition, the Chilean professional footballers union (Sifup) announced that this Sunday, for the third consecutive weekend, the league will remain paralyzed. “We adhere to social mobilizations from day one. We cannot be oblivious to the pain and suffering of many compatriots, ”Sifup said.

“Conmebol strongly thanks the government of Chile for the active collaboration provided by the various public distributions for the correct organization of the final of the Liberators. We wish the Chilean people and their authorities, peace and goodwill, ”added the statement of the highest body of South American football.

River is the current champion of the Copa Libertadores, after beating Boca 3-1 in the final last year in Madrid, while Flamengo will try to repeat his only title so far, won in 1981.