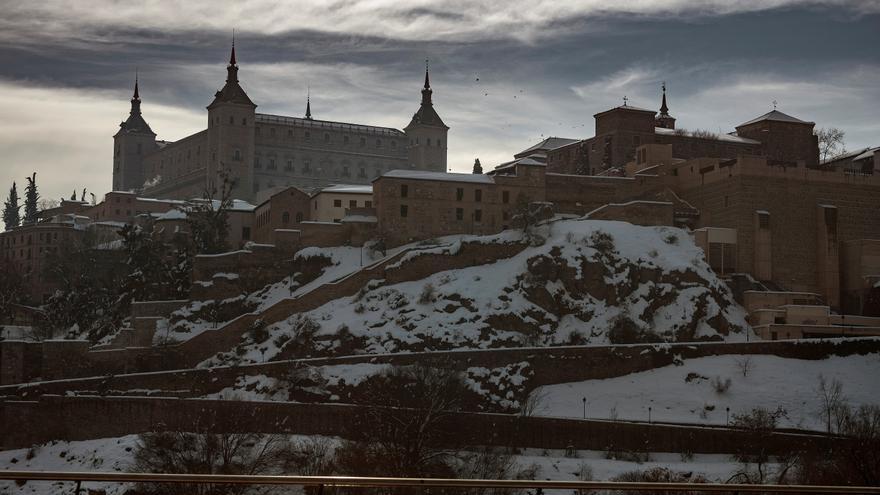 Toledo, Jan 17 (EFE) .- The unusual storm that has hit the city of Toledo with force can also damage its splendid monumental heritage, especially because the ice, when melting, penetrates the stone and the structures of the buildings , and when it solidifies again due to the intense cold of these days, it causes cracks that may not be seen now but can be seen with time.

After the first emergencies and the most pressing situations, it is necessary to review the state of the buildings in this World Heritage city where the consequences of the storm are still visible.

The director of the Royal Academy of Fine Arts and Historical Sciences of Toledo, Jesús Carrobles; the dean of the Cathedral of Toledo, Juan Miguel Ferrer, and the professor of Art History at the Humanities Faculty of Toledo Palma Martinez-Burgos have spoken with Efe about how Filomena can affect heritage.

Carrobles is clear that an "unusual" storm like this "can seriously affect" many buildings and other assets in Toledo such as its historic gardens, many of which have been "largely destroyed" and will take years to recover. their appearance.

With regard to buildings, the consequences will be seen in the short and medium term. At first, the snowfalls suppose a "brutal" load, of even tons of weight in the roofs, that "aggravates the situation of many, especially those that are in worse conditions of conservation".

If intense frosts are added to the snowfall, the result is that the ice will remain in downspouts, gutters and the drainage system, and that 'freeze-thaw' rhythm will affect the roof, the coffered ceilings and the walls, because the water always tends to look for a way out.

In the longer term, this 'freeze-thaw' causes the water to penetrate the stone and when the cold arrives it re-solidifies and explodes, so that in structures such as sculptures, cornices or stone blocks, small cracks will occur which in case failure to seal will cause damage. It may not happen now, but it can happen in a couple of years.

It happened in the tower of the Cathedral in 2018, when a piece of the cornice fell to the street one day when there was a small storm of air and rain: "it did not fall because of that rain but because of snow, ice and similar things. to what we are living now, which later, when there is a climatic incidence, causes the other ", Carrobles explained.

Within the Historic Center of Toledo there are properties that are "magnificently" preserved and if there is a problem it will be easily solved, but there are others that require more attention, especially convents, whose religious communities take care of them "exquisitely" but do not have the sufficient means.

"This type of property is the ones that can suffer the most from situations as complex as the ones we are experiencing," warned the director of the Royal Academy, who pointed out that it is "very difficult" to perceive these damages: you can see if a roof gives way , but in the case of alterations inside the stones, they are not detected with the naked eye and the technicians need to be pending to come up with solutions.

Professor Palma Martínez-Burgos has also stressed that low temperatures and ice can cause cracks "that end up breaking and destabilizing" some part of the building and hopes that a "close monitoring" will be carried out, especially in those buildings that were already with "red signage" due to its status.

In addition, many buildings in Toledo are built with masonry, brick, wood and other materials that are not the usual stone of the north, where there are usually lower temperatures than those registered in Toledo this week.

For Martínez-Burgos, once this first phase has passed, a second surveillance of the buildings, inspection and maintenance reinforcement must be passed.

In the Cathedral of Toledo they are considering inspecting the roofs with a drone because going up to check their condition after Filomena's passage is "risking your life", said the dean, Juan Miguel Ferrer.

Religious worship has not been suspended on any day in the temple and worshipers have come every day, although sometimes they have had it very complicated by the ice, according to the dean who has explained as an incident that one of the two connections of water from the Cathedral, probably due to the fact that some section of the pipe has frozen.

As for the building, Ferrer explained that the roofs are in good condition, and the one that can give more problems is that of Transparente but due to its inclination it has retained little snow and no problems are expected, and no leaks are seen in the vaults, although they foresee that when the thaw begins there will be some situation to correct.

The most delicate area is that of the apse, in the Chapel of the Kings, on which he has stated that "obviously when it begins to thaw we will be very attentive so that no problem occurs".

The humidity that may arise is also worrying, since to release snow from the streets, large amounts have been piled up against the walls of the Cathedral, and in fact outside the Mozarabic Chapel and the Chapel of San Blas there is a lot of snow piled up that it can be a source of moisture in the future. "We will be attentive," said the dean.

An example of a historic garden damaged by Filomena is the Toledo school park, located in the Roman Circus. This garden was planted in 1905 when Councilor Luis de Hoyos, father of anthropology, took the children there to celebrate one of the first Arbor Day to be commemorated in Spain.

"They are those great pines that there were until now and that were the originals of that Arbor Day," Carrobles lamented, who stressed that they are elements that take a century to achieve the size they had.

SALT IS NOT A FRIEND OF THE HERITAGE

If snow and ice are not friends of heritage, the salt that is used as flux in the streets is not either, since it is diluted with water, passes into buildings, rises by capillarity and when drying produces the same effect as ice, that is, increases in size and the stone explodes.

In cities like Toledo, snowfalls were common thirty or fifty years ago and the fluxes used were ashes from chimneys, straw or even manure, which fermented, produced heat and dissolved ice.

It is not a question now of throwing manure on the streets, but it was the traditional way because at that time what there were not were trucks of salt to dump on the city.

"We have preserved the properties we have because we have not added salt every time we have had snowfall," said Jesús Carrobles, who recalled that salt is prohibited as a flux in many countries.

However, he understands that "in a situation like the one we live in, you have to add salt and whatever it takes to be able to have a somewhat logical life and not kill yourself in the streets" but knowing that "salt is an element that also affects very negatively to the conservation of the stone ".