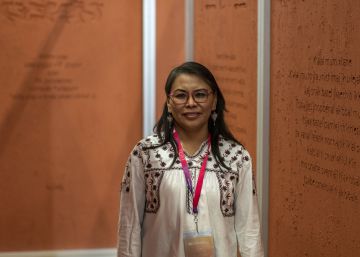 Great-grandmother Juana spoke Nahuatl, grandparents stopped speaking and parents marched to the city. Alejandra Arellano is the fourth generation of that ranchería in San Diego Cuentla, in the State of Mexico. When he graduated he felt the need to return to the origins through language and began to study it. Today she is the director of Linguistic Policies of the National Institute of Indigenous Languages ​​(INALI) and her family tree illustrates the path towards insignificance that the 68 languages ​​of Mexico are dangerously traversing, some so weakened that their speakers are known by name, like Mrs. Leonor, the lady who speaks kiliwa in Baja California; or the Veracruz oluteco with whom Don Diocese Priscillian addresses his wife, Juanita, to see if she ends up learning it.

In 33 years, it is the first time the Guadalajara International Book Fair It has its own pavilion dedicated to indigenous languages. His various rooms (the design he won is the Plastic Poems project) are closed with panels of false scratched clay to write verses or creative texts in pre-Hispanic languages. Running your hand through these rough walls brings you together with the past, although the pavilion aims to do the opposite: bring to the present the enormous heritage with which the original peoples have communicated, provide visibility, take away from shame or disuse, return the Life to a dying animal.

One in five Mexicans calls themselves indigenous and six out of 10 know how to speak in one of these pre-Hispanic languages, another thing is to practice it. The ones that enjoy the greatest health, following the INALI data, are Nahuatl, Mayan, Tzeltal, Mixtec and Tsotsil. In intensive care are, for example, the awakateko, the ayapaneco, the teko or the popoluca of Oluta. In some cases the speakers are only a couple of tens. But also the majority lose vigor displaced by Spanish and English in the north of the country. Official statistics indicate that 7.6% who communicated in some indigenous language in 1990 decreased to 6.5% in 2015. Yucatecan Maya speaks commonly of 860,000 people in 2015 empties at times: between 3 and 17 years barely know 13% in the area. This week came a news that momentarily covered the wound: the Mayan language will be mandatory in the basic teachings in Yucatan. This was approved by the State Congress alerted by the decline in its use. The budget, local media said, was only planned for 2021.

On paper, the protection achieved by these languages ​​(nobody wants to hear the word dialect) is complete, as are the rights of its speakers. But the practice is very different. “The spaces of use have been lost (markets, businesses), the young people only speak them in their communities, in the city they stop doing it. We need to put them at the same level as English or Spanish, which acquire presence. 60% of people know Mayan in Mérida, but it is hardly used, ”says Fidencio Briceño Chel, who gave a lecture at the FIL entitled“ Between reality and justice ”. Reality draws centuries of discrimination and stigma to which migration is now added, which has been turning off the light in the original communities. "No one speaks Nahuatl in San Diego Cuentla anymore," Alejandra Arellano laments.

The arrival of schools in these ranches, paradoxically, has opened the most dangerous crack: the students are trained only in Spanish. So serious is the situation in some territories that the recovery of these languages ​​seems already impossible. Fidencio Briceño, doctor in linguistics, academic, researcher, activist, proposes at least to act diligently with the most minority to leave this documented legacy. "In some cases, these are very small tribal groups that only use this language in ritual contexts, not even daily," he says.

And although the decline seems inevitable, in the absence of data, Briceño says that a renewed interest in learning these languages ​​is appreciated; That this year, 2019, dedicated to the native languages, have not given up in their offer of teaching workshops: “Before this was only a matter of anthropologists and linguists, now there is an approach from the letters, the arts, the cultural. There is even a rock group that sings in seri. ”

Wayuu writer Vicenta Siosi, also a guest at the FIL, lives in a Colombian ranchería bordering Venezuela, in La Guajira. His stories participate in this "worldview" that the indigenous people usually speak to explain a way of understanding the world that shows some angles that are hardly compatible with the 21st century. It is not the case of language. The author of Mrs. iguana He explains that the old oral transmission can now be written because they transcribe the sounds of the Wayuu words with the Spanish alphabet. But the world was very small in those centuries and these languages ​​have not been renewed with the times. To mention an elephant, for example, they must describe it (large animal, with trunk and ears, etc.). That is the reason that The little Prince, translated into Wayuu have 200 pages (is there any language in the world that has not yet translated the famous work of Saint-Exupéry?).

At what price should a dying tongue be rescued? In his talk at the FIL, Briceño cited five times the word identity associated with the language and warned of the danger that a city like Mérida is, which receives thousands and thousands of people among tourists and new neighbors, who are not Maya. Should we close the city gates? "Well, I think the change must be in the users, that they are not ashamed to speak it in all the spaces, that they put it at the same level as the others", he claims. One solution would be for the law to pass from paper to reality and "there are professors, officials" who use these languages. There are incarcerated people who did not find out about their process because neither translator had. Poverty is the other great ally of idiomatic bleeding.

Alejandra Arellano, the director of Linguistic Policies of INALI remembers her thesis, which aroused her taste for speaking the language of great-grandmother Juana. She was in Tetelcingo (Morelos), a Nahuatl community studying the language as an identity feature. “I noticed that only parents and grandparents spoke Nahuatl. I asked the children why they don't: "We'll talk when we get older," they replied.