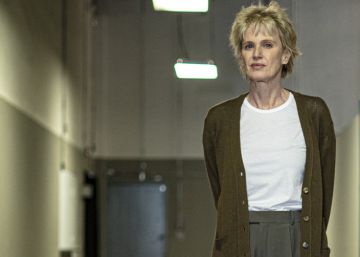 A head sticks out in the middle of the sea of ​​naves gathered in the lobby of the Guadalajara Hilton hotel. The skull of Siri Hustvedt (Minnesota, 1955) looks like a sunflower among a group of women that surrounds her and talks to her looking up. The 182 centimeters long of the American writer, prize Princess of Asturias of the Letters 2019They are a good way to break the ice. In 1986, during a trip with his sister Liv to China, someone took a picture of them. When he saw the image of that figure that could have been painted by Giacometti among the Peking people, he understood the looks he received. “Only when you see yourself from outside is it that you understand,” says the writer, who wears flat shoes similar to those of a dancer and who wears a baggy pants above the waist, which makes her look even taller.

This is Hustvedt's first time in Guadalajara, but not his first trip to Mexico. He does not remember exactly when he first visited the country that is hosting it today. She thinks it could have been in the mid-90s, when she accompanied her husband, also writer Paul Auster, to promote Leviathan (Anagram, 1993). He also received images of a stay at a ghostly hotel in Taxco (Guerrero), which he visited with his daughter Sophie. He confesses that the memories of his travels get blurred and the memories overlap. “We remember in the present and the present affects the past. There is no original fact that you can remember, ”he says. In spite of this, she assures that that first trip left her "stained by colors and marked by experience". The phrase comes out when you see the brightly embroidered cushions in the waiting room for writers visiting the international Book Fair.

It is curious that everyday dates and moments blur in the mind of a brilliant writer. His novels and essays are full of meticulous data. Like your conversation. Minutes before heading to a press conference, where he will talk about his new novel, Memories of the future (Seix Barral, 2019), Hustvedt says that Auster always gets sick from the stomach when visiting Mexico. The last occasion was in 2017. And to make a truly memorable trivial fact, the writer cites an experiment from the 70s. A group of scientists fed mice with drugs or sugar in one of the first investigations into the placebo effect. The death of mice that had only taken sweetened water allowed us to conclude that the nervous and immune systems were more connected than previously thought. "Things don't just happen in our mind," explains the author of Everything I loved (Seix Barral, 2018). The anecdote about her husband's weak digestive system allows her to theorize about the relationship between body and mind, an intensified obsession within her work since 2006, when suffered a strange attack that made her convulse violently while reading an elegy in honor of her father, who died two years ago.

To talk about the accidental findings that usually brighten scientists' lives, Hustvedt would cite minutes later another study of Italians who headed for the discovery of mirror neurons in the mid-90s when they saw a monkey imitating another while eating. To continue in force in the obsessions of prolific author of disclosure, the writer maintains a strict discipline. When he is at his home in Park Slope, in Brooklyn, he spends four hours reading every morning. The menu includes numerous scientific articles to which you have access as part of the Faculty of Medicine of Weill Cornell, In New York, and to his numerous publications in journals specialized in psychiatry and neurosciences, in addition to their obligation to give a monthly conference on a scientific topic.

Hustvedt walks his short straw mane through the FIL. It is one of the most characteristic features of the author with her deep blue eyes, both inheritances of her Norwegian lineage. A couple of years ago, Hustvedt wrote a text for the book Me, My Hair and I: Twenty-seven Woman Untangle an Obsession where he addresses the social weight of hair. "The childish and silly connotations of being blonde can explain why I have dreamed several times with a monkfish cut," he wrote. In the text, before basting Freud with Rapunsel, the author talks about Iris, the protagonist of her first novel, Blindfold (1992). The heroine cuts her hair in a transformative period. Iris happens to be a male Klaus who wanders through Manhattan dressed in a suit. The process casts doubt on the notion that appearances are purely superficial.

Hustvedt has visited Guadalajara with the intention of erasing borders. In the morning, in front of journalists, he talked about literature, feminism and his work. He also answered the questions that least interested him: those that had to do with his marriage. “What kills friendships and romances is boredom. We have never been bored of each other, ”he told a reporter who wanted to know what life is like with another writer.

The literary figure yielded to the giant of off-road thinking in the afternoon. The conference Stories of an intellectual tramp Juan Rulfo captivated the audience with a theme that immediately catches the attention of every Mexican: the borders. “What are those words and images that are inside our head and how do we draw the boundaries or boundaries between things? Are they within the person who perceives them or outside in the real world? What is the relationship between internal and external borders? ”He asked attendees.

Hustvedt read a text for about an hour. His left hand, stored inside the pocket of his pants. The soft voice of academic tone led a journey that began at age 14 in the four corners of his country, the division between Arizona, Colorado, New Mexico and Utah. The journey started in childhood became a destination that questions any limit. Not only geographies among nations. It also blurs – with the help of philosophy, biology and neuroscience – the boundaries between body and mind; and the supposed differences created thanks to an authoritarian narrative between the masculine and the feminine. "The desire to point everything out on an anatomical map, to establish precise boundaries between one thing and another has become a resistance to tolerate ill-defined boundaries," the author explained. Siri Hustvedt is a bridge that helps explore these unknown territories of imposed limits.

“They didn’t take us seriously until Madison Square Garden”