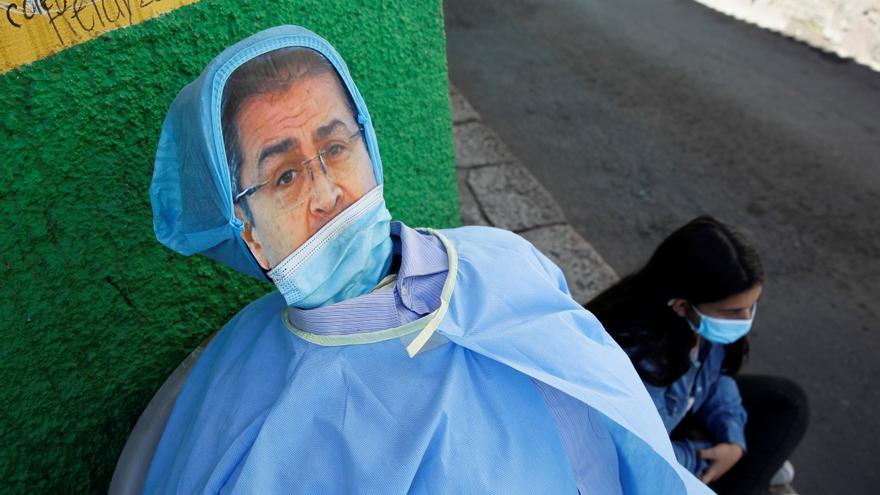 Tegucigalpa, Dec 30 (EFE) .- The figures of the presidents of Honduras, Juan Orlando Hernández, and the United States, Donald Trump, will be burned in Tegucigalpa on the last night of 2020, the first, due to the lack of control of corruption and, the second, for its rejection of the thousands of Central American immigrants, mostly Hondurans.

Represented in a stick figure, Trump is the main image that Honduran Julio César Colindres chose this year to set fire to it on the last night of 2020 and receive 2021, as part of a popular tradition in the country.

“Trump has just lost the elections in the United States, Latinos do not want him,” Colindres, a humble man who, for two years, has been making puppets in the central La Leona neighborhood told Efe to be burned at the end of the year.

By head and so that there is no doubt who his “Old Year” is, he placed an enlarged photograph of Trump on the puppet and took off a mask that he had put on him, he explained, because the US president had questioned his effectiveness since the start of the coronavirus pandemic, a disease that affected him and the first lady, Melania Trump, last October.

The United States is the worst-hit country in the world by the pandemic with more than 19.2 million confirmed cases and 334,000 deaths, according to an independent tally from Johns Hopkins University.

CORRUPTION WILL ALSO BE BURNED

Corruption will not escape from the “bonfire”, which Colindres has represented in a puppet with the figure of the Honduran ruler, whose Government and others have been peppered with reports of crimes of corruption.

The image of President Hernández, dressed in a disposable gown, hat and mask, will be burned because “there are people who do not want him and people who love him, he has done good things, for other bad things, he has been in government for almost 8 years. which is more popular, “explained Colindres.

He noted that Hernández’s second term, which began on January 27, 2018, has been “bad”, although he stressed that the Government has supported many affected by the covid-19 pandemic and the effects of tropical storms Eta and Iota .

The representations of characters, filled with mortars and firecrackers, made this year by artisans in different cities, will be burned on the last night of the year as a traditional popular expression against characters that, in the opinion of their creatives, do the most harm. to the country.

Colindres hopes to receive 2021 with the hope that the new year will bring “peace, everything changes” and that the deputies and public officials “soften up (so that), there are more opportunities for people.”

He also said that the puppets that are burned every year represent public figures in power because they have not done things for the people, but for them.

JUAN PUEBLO, PROBLEMS OF THE HONDURAN

At the other extreme, always in Tegucigalpa, the employees of a tapestry workshop made a puppet representing the Honduran people and the economic situation that affects the population due to the effects of the pandemic and tropical storms.

The puppet represents “the wounded people, hit by all the things that have happened, the (natural) phenomena, the covid-19, a lot of people asking in the streets, it has been a very hard year for most of the people,” Alexander explained Lagos, who with his brother Luis have spent several years doing Old Years in the extreme south of the capital.

He pointed out that in the elaboration of the puppet – a man dressed in old clothes and shoes and a hat alluding to Christmas – all the workshop employees have participated.

The traditional end-of-the-year puppets in Honduras are made in the open air so that people appreciate them and, incidentally, if you have the will, contribute some economic contribution towards the purchase of the rockets, mortars and firecrackers with which they will be filled, including to take photos.

Lagos, like many Hondurans, is confident that in 2021 “a new Honduras will flourish and that so much trouble, so much death for our country will end.”

For many years the tradition was to burn stick figures filled with rockets, representing the Old Year, but in recent decades in various cities of the country images have been made in the likeness of other characters, mostly political figures, starting with the current ruler.

Hondurans close 2020 hit by a difficult economic situation in the country derived from the covid-19 pandemic it has suffered since March, which leaves more than 120,000 people infected in the country, and the severe damage to infrastructure left by Eta and Iota.