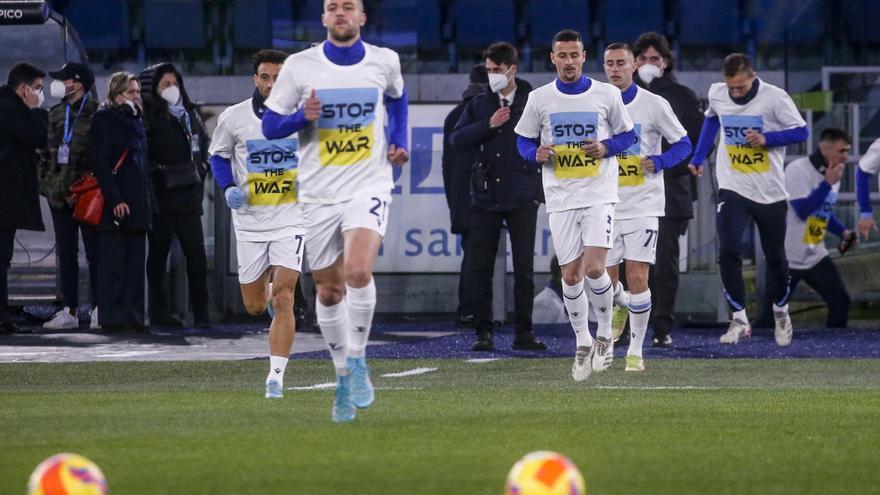 The FIFA opened his mouth this Sunday to ask for peace and censor the Russian military intervention in Ukraine. But it has not been a forceful cry and has left the soccer team of the country of Vladimir Putin with the ball at his feet, allowing him to continue playing while his soldiers invade and fight in foreign territory. He has not responded to the requests of Poland, Sweden and the Czech Republic who refuse to play against Russia for the playoff spot for the Qatar World Cupwhich will be disputed next winter, with the intention of negotiating and finding a way to resolve this conflict, which at this time seems very complicated.

From now on the russian soccer team He will be able to continue competing internationally officially, but he will have to do so without being able to display the name of Russia, without listening to the country's anthem and without playing home games, which he must play on a neutral field and without an audience in the stands. FIFA communicated its new decision in an official note that came after a day of the League lived in all European countries between Saturday and Sunday with constant displays of footballers and clubs, and also fans, of support for Ukraine, of requests for peace and rejection of the war started by Putin.

The international soccer federation has requested this Sunday the immediate restoration of peace. "FIFA would like to reiterate its condemnation of the use of force by Russia in its invasion of Ukraine. Violence is never a solution Therefore, this federation expresses its deepest solidarity with all the people affected by what is happening in Ukraine."

In this way, FIFA tried to find a sporting solution that, without a doubt, will cause a lot of debate in the coming days by allowing Russia keep playing. The reaction of the highest soccer body occurred five days before the start of the Paralympic Games in Beijing where, for now, Russian representatives will be able to participate, although with the typical measures of not being able to use the country's name or flag. In this case for the sins of the past with doping. Now comes a new sanction to Russia, and not for the use of prohibited substances but for the use of weapons.

Despite everything, they will be able to continue competing in Europe. Another thing is that rival teams want to face Russia. And the same thing happens with the teams in competitions of the UEFA. In this case there is only one club affected, the Leipzigwhich receives the Moscow Spartak, in the Europa League, on March 10. "No international competition will be played on Russian territory and home games will be played on neutral territory and without spectators. Also, Russia must participate in any competition under the name of Russian Football Union (RFU)", adds the same note from FIFA.

The body, finally, opens the way for negotiation, together with the UEFAto find a viable solution that will allow the repechage playoff between Russians, Poles, Swedes and Czechs to take place outside the boycott announced by the three teams that must face the Russian team to get a passport to Qatar.