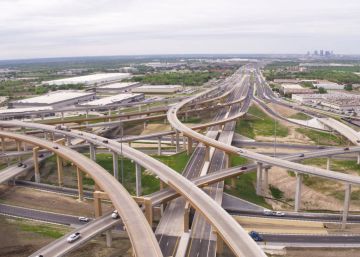 Ferrovial’s interest in growing in the US is multiplying. The one that is one of the largest highway operators in the country seeks a quantitative leap in the medium term in the construction and management of tolls and also in water concessions and even railways.

The CEO of the group, Ignacio Madridejos, took advantage of the recent meeting with analysts, within the framework of the presentation of results, to praise his company as the “largest developer, constructor and operator of dynamic lanes”. Ferrovial comes from losing in Maryland the final of a contest valued at 4,000 million dollars (3,360 million euros). It is that of the installation of dynamic tolls on I495 and I270, but right there expectations are reopened as there are an appeal against the award to Transurban.

More active than ever, Ferrovial It has identified other opportunities for 8,000 million dollars, some of which have been presented by the company itself to the Transportation departments. With these unsolicited proposals, the Spanish seeks competitive advantage in possible contests if it succeeds in convincing the states.

It anticipates the opening of the extension of the NTE 35 West, in Texas, and the I66, in Virginia, for 2023

In the heat of the change of government in the US, it will also try to develop its water subsidiary Pepper Lawson and he will go for railroad work based on his experience in California. The condition to enter into water contracts is double-digit performance, and to participate in the modernization of the railroad, plans will be established where it has construction capacity.

In other geographies, the Colombian Cocoa Route it is 68% complete; the projects of Slovakia (D4 and R7 in Bratislava) reach 86%, and the program DARE, in Melbourne (Australia), has carried out 97% of the work. These three are partially open to traffic.

The American Highway Contest Capital Beltway (I495) and I270, promoted by the Maryland Department of Transportation, is still alive and controversial. The award of February 18 to the Australian consortium of Transurban and Macquarie has been appealed by one of the finalists, without revealing his identity. In addition to the tandem formed by Ferrovial and Britain’s John Laing, there was also a team led by Itinera.

CEO Ignacio Madridejos expressed surprise at the differences in the score of the I495 contest, in Maryland

The contract grants the successful bidder the design of the toll system in the area of ​​the city of Washington and, subsequently, a preferential position for its execution and management for 50 years. The first phase of the project, valued between $ 3.5 billion and $ 4 billion, includes the construction of a new American Legion bridge on I-495, where four lanes will also be added, and the extension of I-270. The winner would have access to a second phase with investments for another 4,000 million.

The Administration wants to have the award approved before the summer. But the specifications contemplate that the allegations go through a process that can end in ordinary justice.

The Spanish ACS, FCC, Acciona, Globalvia and Roadis They showed interest in starting the tender. In fact, ACS reached the doors of the short list.

The Washington Post has published in recent days that the governor of Maryland, Larry hogan, and the person in charge of the Transportation Authority, James, F. Ports, contacted Transurban in 2019 during a business trip to Australia. And the Department of Transportation has come to the step arguing that the governor’s office does not intervene in contests.

Ferrovial CEO Ignacio Madridejos acknowledged to analysts that the Maryland project was “very relevant” for the company and that he had appreciated a “significant difference”In the financial offer score, which is where Transurban stood out. “We are analyzing the result and all the information related to the tender,” said Madridejos. The executive alluded to the confidentiality clause and avoided revealing whether Ferrovial intended to appeal.

Ferrovial’s concession asset par excellence, the 407 highway in Toronto (Canada), awaits a resolution in April on the possible payment to the Administration for the breach of the minimum traffic thresholds in 2020.

The concessionaire hopes to settle the process without any impact in view of the fact that the collapse is due to the pandemic and mobility restrictions, and the force majeure clause of the contract may be applied. 407 already had a penalty of CAD 3 million in 2019, when non-compliance was related to the degree of congestion of the alternatives, especially 401. Ferrovial has decided not to provision in the confidence that there will be no penalty.

The Spanish woman expects a higher vaccination rate in the coming weeks for the progressive return of mobility in Toronto. The payment of dividends of 407 depends on this reactivation, from which Ferrovial received 160 million euros last year, compared to 309 million in 2019. The current situation, and its impact on the financial ratios of 407, makes it foreseeable that remuneration does not surface until the last part of this year.

The reform of the Eurozone