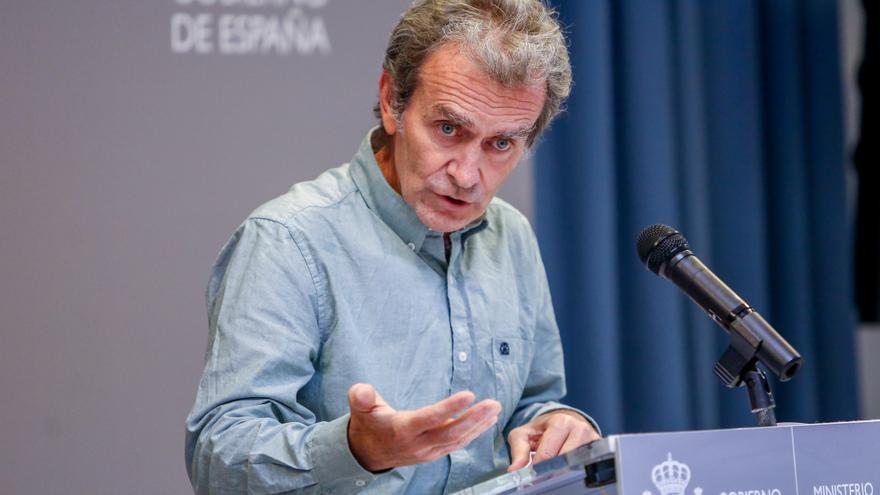 He has avoided “giving specific dates”, but the director of the Alerts and Emergencies Coordination Center of the Ministry of Health, Fernando Simón, said this Monday that “soon” they will be able to take “concrete steps” that can go “relatively quickly” in order to relax the use of masks outdoors. “We already have 7.2 million people vaccinated with the complete schedule and at least 15 million with at least one dose. It is very possible that outdoors, in not many days, the use of the mask can be reduced,” he explained to the be asked directly about this matter, on which they have already spoken in recent days different political leaders inside and outside of Spain.

However, the Health spokesman recalled that the rapid response document to the pandemic that the ministry approved last summer with the autonomous communities does not consider the factor of vaccination as a palliative to the crisis, so the beginning of relaxation in the use of the masks in open spaces it would require their modification. In the same vein, he recalled that “giving specific dates” can “give the idea that at a given moment we have finished with COVID-19”, and it will also be necessary to assess whether measures of this type can be applied to the whole of Spain or only in some communities. Simón has also pointed out that “we cannot suggest that stopping using masks” allows “stopping maintaining physical distance” in spaces. In Spain, the President of Galicia, Alberto Núñez Feijóo, came forward last week to say that his intention is that in July it is no longer necessary to wear masks on the street. Informs Bethlehem Rivet.

The Ministry of Health has registered this Monday a cumulative incidence of 151.86 cases per 100,000 inhabitants in the last 14 days. This indicator continues to decline and stands on this day, with which they are already 22 down, 10 points lower than on Friday, when the last report was published.

The health authorities have also notified 11,061 new cases of coronavirus since Friday, although without data from Castilla-La Mancha. It represents a decrease compared to the 13,984 new infections last Monday, the most recent day with which it can be compared, since it includes the data for the entire weekend. In total, since the pandemic began, 3,615,860 people have been infected in Spain.

In the death box of the balance sheet provided by Health, with data from the autonomous communities, a total of 79,432 people appear, of which 171 have died in the last seven days. 93 more people died than on Friday.

In the vaccination section, in Spain 7,213,716 people already have the complete schedule that guarantees immunity, which represents 15.2 of the population. In addition, almost one in three citizens has already received at least one dose of the vaccine. In total, 22.3 million doses of some of the coronavirus serums have been applied, after the 629,381 punctures over the weekend.

Asturias remains the region with the highest percentage of fully vaccinated population, with 25.6% of its inhabitants, followed by Castilla y León, with 24.7%, and Galicia, with 23%.

The President of the Government, Pedro Sánchez, confirmed this Monday what some autonomous communities had already announced, that vaccination for people under 50 years of age will begin en masse from June. Sánchez has also reiterated that Spain will donate between 5 and 10% of vaccines to Latin America, around 7.5 million doses. Along the same lines, the president has assured that the pilot project for the green tourism certificate is giving good results, so Spain will start working with it from June.