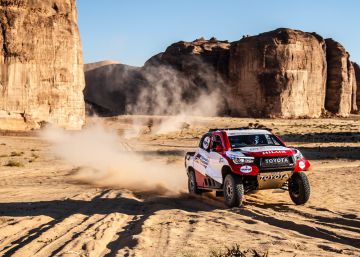 Slowly but surely. Fernando Alonso is accommodating to driving through the desert and has added another fourth place in the second stage of the Ula Neom Rally. The Spaniard repeated this Thursday the result he achieved on the opening day and, despite moving away from the final podium, he sits in the head group of the general, 11 minutes and 46 seconds from leader Yasir Bin Seaidan (Mini). On a journey of 211 kilometers, Alonso and his co-driver Marc Coma gave more than seven minutes to the winner of the day, Yazeed Al-Rajhi, who drives a Toyota Hilux similar to his own, but the second stage of the Saudi raid served to reinforce the good feelings of the first day "Again a fourth position, and with a better pace than yesterday. Happy with the day," Alonso celebrated, getting out of the car.

The strategy of the Toyota team does not, under any circumstances, transfer the responsibility of the victory to the Alonso-Coma duo, but rather that their participation in the Saudi race is primarily intended to increase the experience of the former F1 world champion in driving on sand and improve your sailing skills to get around the dunes. Alonso and Coma have their sights set on the Dakar, which will be held from the first week of January in Saudi Arabia, on conditions similar to those the pilots now find in the Ula Neom Rally.

Despite the acceleration given in recent weeks, the Spanish couple will arrive short of preparation at the exit of the most famous raid in the world. But Fernando Alonso takes away the importance of being a rookie in the desert. "You are never fully prepared for a race like the Dakar," he repeated. Ending the Ula Neom Rally with a satisfactory result should serve to strengthen the confidence of Alonso and Coma, and their entire team, less than two months before the Dakar leaves. The other tests where they have competed so far, the South African Lichtenburg 400 and the demanding Rally of Morocco, resulted in many mishaps and discrete classifications.

Jon Rahm’s incredible hole in one