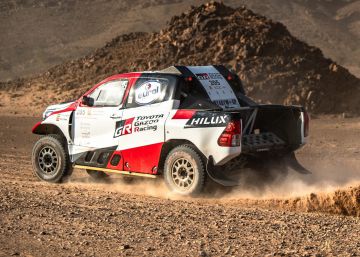 Step forward of Fernando Alonso in his preparation for the Dakar. The Asturian driver finished in third position, this Friday, the third stage of the Al Ula Neom Rally, which runs through the desert of Saudi Arabia. On a 231-kilometer track, Alonso and his co-pilot Marc Coma completed their best performance since they shared a Dakar project aboard the Toyota Hilux. The Spanish couple entered 17 seconds from second place and 1 minute and 55 seconds from the winner of the day, Yazeed Al Rajhi, who competes with a Hilux very similar to Alonso.

Although the two-time world champion of Formula 1 has insisted that his goal is not to set goals in the general classification, but to accumulate experience in the desert, after three stages of rally he has the podium at 6 minutes and 22 seconds. This Saturday the race will end with a stage to the sprint, which does not reach 200 kilometers.

Alonso and Coma debuted this Wednesday in the Saudi test with a fourth place and copied result on Thursday, in the second stage. The passage of the kilometers has reinforced the mood of Alonso and the Toyota team, from where it is positively valued to have a presence in the Al Ula Neom Rally, a minor test but that acquires double value due to the proximity of dates with the Dakar. Alonso needs to add baggage in the desert and does not hide that the Saudi test is injecting good sensations, rolling through a terrain of similar characteristics to those that will find the teams that participate, from the first week of January, in the most famous raid of the world.

Beyond improving its speed and reliability on the sand courts and being more precise when it comes to dodging the dunes, Alonso also seeks in the Al Ula Neom Rally to refine its rapport with the Toyota Hilux and deepen the knowledge of mechanics, a pending subject for him and that can have a full importance in long and hard stages, very tiring for the car and prone to trigger breakdowns. The Dakar will be held for the first time in its history in Saudi Arabia, and given the veto imposed by the organization to train on the sections where the competition will run, the Rally Al Ula Neom is a valuable test to evaluate the performance on a stage Very similar to the race.