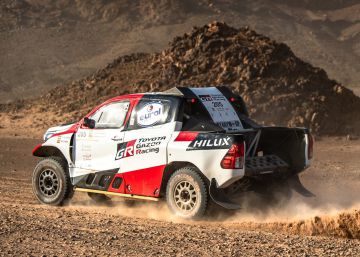 Fernando Alonso finished third rali Al Ula Neom, a test that faced as the last great test before being planted on the starting line of the next Dakar. The Spaniard did not hide his satisfaction when crossing the finish line after the final stage, this Saturday, and despite being a local competition he pleased with appreciation the first drawer of his short career away from the closed circuits. "First podium in a rali, thanks guys!" Alonso said on social media, applauding the work of the Toyota squad. The winner of the test was Yazeed Al-Rajhi, at the controls of a Toyota Hilux similar to that of the Spaniard. Between them, the Yasir Bin Seaidan Mini was classified.

Rali Al Ula Neom has passed through Saudi Arabia, on conditions similar to those expected for the next Dakar, which will be held from the first week of January and also in Saudi territory. Alonso and his co-pilot, the Catalan Marc Coma, have gone from less to more throughout the four stages of the rali and, this Saturday, they have buckled the podium when finishing the third day the final day. It was a short section of 175 kilometers, which the Spanish couple has completed in 1 hour 36 minutes and 16 seconds. A mishap suffered by Sheik Khalid Al Qassimi, who was in the leading positions of the test in the first days, has benefited the Alonso-Coma duo and facilitated his presence on the final podium.