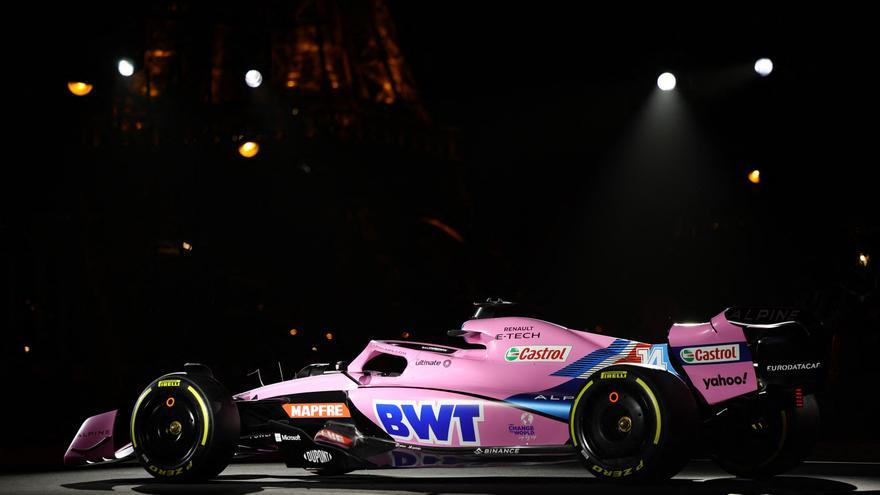 The Plan is no longer a philosophy or the perfect marketing slogan invented by Fernando Alonso to start becoming a reality. And like any theory that is put into practice, the result is still a unknown. This Monday, Alpine has unveiled its car for the 2022 season from Formula Onethe A522, that Alonso and his partner Stephen Ocon will test this Tuesday in a 'filming day' of 100 kilometers in the Circuit of Barcelona, and from Wednesday on the three pre-season test days on the Catalan track. It will be a shakedown behind closed doors, without an audience, television or official timing, as the second round of rehearsals will have, in Bahrainfrom March 11 to 13.

For now, the presentation of Alpine, in the Museum of Modern Art in Paris, It has been a declaration of intent by the Renault Group team, which has focused on its project at the Viry Chatillon and Enstone factories with the aim of regaining its former status as a leading team in the World Championship.

Beyond its innovative design, marked by new F1 regulations, with ground effect and 18-inch Pirelli tiresthe highest expectations of Alonso and his team are focused on the engine, which last year was a great handicap for the two-time Asturian champion to squeeze in his return to F1 after two years away from the 'great circus'.

One more thing… 😏 Why have one livery, when you can have ✌️ Introducing our BWT season opener spec livery.#A522Launch pic.twitter.com/demeoTcqvu

With everything and despite the power deficitAlpine finished fifth in the championship, in addition to adding the first podium for Alonso on his return (Qatar) and an unexpected victory for Stephen Ocon (Hungary) with the invaluable collaboration of Fernando.

Alpine CEO, laurent rossiwho for two months has undertaken a deep restructuring of the team, has pinned the success of 'El Plan' on 100 races. Four seasons. Consider that this is the realistic margin to get back on top.

Regarding the first season with the colors of the Renault sports brand, he has dispensed with the director Marcin Budkowski and the counselor Alain Prost, promoted Pat Fry to head coach, appointed Bruno Famin as head of engines in Viry and has hired Otmar Szafnauer, former Aston Martin to place him at the head of the team as Team Principal.

The incorporation of Szafnauer comes from the hand of BWT as new team sponsor with the color pink as a hallmark of the Austrian company. A new economic impulse that adds to the determined commitment of the president of the Renault Group, Luca de Meo, architect of the signing of Alonso in 2021 and main endorser of his famous 'Plan' and of all the structural changes he has announced rossi.

Caution in the team

"You had to choose between reliability and power, as it is very difficult to achieve both at the same time. Throughout the 2021 season we faced certain problems in terms of reliability and finally that was our choice. I told the guys: 'look for performance and don't worry about the rest. For me it is better if we have many horse power and not a very reliable engine that has no power", commented the CEO of Alpine. A logical approach, given that the engine freezing it will not prevent further polishing the failures that arise in terms of reliability.

At this point no one can predict if Alpine or any other team will be able to be up in 2022 with the important rule change that comes into force and the end of the hybrid era which has invariably dominated Mercedes, stringing together the last eight team and seven driver titles. For now in Alpine they are cautious and although the illusion of Alonso and his people is sensed, they continue to reiterate that his goal is set in the medium term, to fight for the championship in 2024 or 2025.

"I am optimistic, I have faith, I think the team did a good job with the car at Viry and Enstone and we are all very motivated. We are ready to start”, assured Fernando, who has already worn the kit with its new blue and pink colors, after the arrival of the Austrian water treatment company BWT as the main sponsor of the French team in 2022.

"We are the team that defends the colors of the French flag and now we will be 'La Vie en Rose' with our new sponsor, BWT. Last year we went fifths, we had a good season and we want to continue progressing. There is a spirit of improvement and a team spirit, as we could see when Alonso hugged Ocon at Hungary", has expressed the president of the Renaalt Group, Luca de Meo, the great architect of Alonso's return to F1.

"The new regulation is a chance. When I decided to return to the championship I did so motivated by these new rules", Fernando underlined. "Last year we had a great season for us, with Esteban's victory and my podium in Qatar, there is a lack of progress but we are stronger than 12 months ago. I hope that with the new regulation everything changes," Alonso closed.